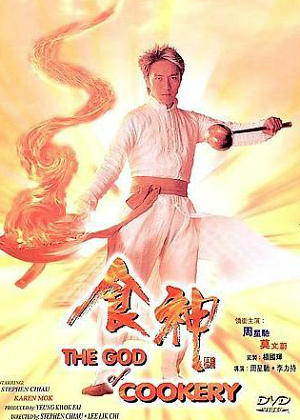 It s actually somewhat surprising that I’ve been writing “Robin’s Underrated Gems” columns for over two years now and it’s taken me this long to feature the work of Stephen Chow. This is a situation that must be rectified immediately. For those of you who aren’t familiar with him, Stephen Chow is an actor/comedian/director who is one of the biggest superstars in Hong Kong. In fact, it’s believed that his box office drawing power in Asia is second only to Jackie Chan. His first major exposure in North America came in 2004 when his popular comedy, Shaolin Soccer, garnered a theatrical release over here. On the surface, Shaolin Soccer seemed like your typical underdog sports story, except that it was set in a world where its characters possessed superhuman martial arts skills. The film was a phenomenal success in Hong Kong, winning numerous awards and becoming the highest-grossing film in Hong Kong history. That box office record would soon by broken by Chow’s follow-up film, Kung Fu Hustle, which also managed to garner a theatrical release in North America. Like Shaolin Soccer, Kung Fu Hustle seemed like a traditional genre story on the surface, but was elevated by Chow’s wacky brand of cartoonish humour. In his review of the film, Roger Ebert said that it was “like Jackie Chan and Buster Keaton meet Quentin Tarantino and Bugs Bunny”. While Jackie Chan’s crossover success in North America has allowed the public to rediscover many of his older Hong Kong films, Stephen Chow’s pre-Shaolin Soccer work has largely been ignored. Chow has over a decade’s worth of comedies which have mostly gone unseen by North American audiences. One of the most unusual of these films is The God of Cookery, an insane comedy which could best be described as “Iron Chef on crack”.

The title character in this film is a celebrity chef named Stephen Chow (played by, um, Stephen Chow). The self-proclaimed “God of Cookery” is an arrogant prick who hosts a television show which mostly involves him judging culinary competitions and harshly criticizing other chefs’ dishes for not living up to his perfect standards. Chow runs his own business empire and will gladly attach his name to any product for money. He is also a complete fraud who actually knows very little about cooking. One day, Chow meets an ass-kicking super-fan named Bull Tong (Vincent Kuk) who begs for a job in his organization. Chow decides to hire Bull after he shows that he’s willing to “go for a hard excretion in front of the lift” (their subtitles, not mine!) for the job. However, it turns out that Bull is a spy working alongside Chow’s business partner in a plot to destroy him. At a major media event, Bull publicly exposes Chow as a complete fraud and reveals himself to be a real master chef who blows Chow’s cooking abilities out of the water. Chow is disgraced and loses everything while Bull takes over his title as the “God of Cookery”. The broke and destitute Chow befriends two street vendors named Turkey (Karen Mok) and Goosehead (Lee Sui-Kei), who are engaged in gang warfare over their rival dishes: beef balls and pissing shrimp. Chow comes up with the idea of combining these two dishes into a product called “Pissing Beef Balls”, which helps launch his comeback. This all leads to a climactic culinary cook-off between Chow and Bull… but not before Chow enhances his cooking skills via martial arts training at a Buddhist temple with the “The 18 Bronzemen of Shaolin”!

Stephen Chow’s brand of comedy has always been based around a style known as “mo lei tau“. This is a Cantonese term which can be loosely translated as “with no source”, i.e. “makes no sense”. Indeed, a lot of the humour in Stephen Chow’s films seems completely random and really does make no sense. Mo lei tau humour had always been present in Hong Kong cinema since the 1970s, but Chow helped popularize it with his hit 1990 film, All for the Winner. Strangely enough, it has been theorized that the Tianamen Square protests of 1989 helped launch the popularity of mo lei tau comedies since they helped provide a form of escapism from such a tense real-world situation. The number one rule of comedy in Stephen Chow’s films is “anything goes” and it often doesn’t matter if the jokes don’t make any sense. This rule would definitely apply to The God of Cookery, a film which is frequently hilarious because of how random and slapdash the humour seems. A popular trait of Chow’s work is injecting martial arts into storylines where you normally wouldn’t expect them. In the story’s third act, Chow decides to introduce “The 18 Bronzemen of Shaolin” into the plot and have his protagonist become a master chief via martial arts training. This whole development comes completely out of left field, yet still fits with the tone of the film. The God of Cookery contains plenty of throwaway gags which don’t have much connection with the rest of the film, but are still hysterically funny. This random scene is the ultimate example of a mo lei tau moment, yet many people consider it to be the biggest laugh in the film.

Obviously, The God of Cookery is intended as an over-the-top parody of the Japanese cooking show, Iron Chef, which was insanely popular at the time. Chow’s films usually have a formula where he plays a protagonist who is cocky and arrogant at the outset, but after suffering a downfall, he learns humility and some valuable life lessons before eventually climbing his way back to the top. The God of Cookery takes that to the extreme since Chow starts off the film as a sadistic douchebag bully with no redeeming qualities whatsoever, but the star has enough natural likability that you still root for and sympathize with him once he stars his downward spiral. In a way, the character is almost ahead of its time since he resembles Gordon Ramsay years before Gordon Ramsay became a famous TV personality. Anyway, the mo lei tau style of humour may be a major reason why Stephen Chow has never achieved full crossover success in North America. Indeed, Chow’s output since Shaolin Soccer and Kung Fu Hustle has been very sporadic, and it would be another four years before he released his next film, CJ7. While Jackie Chan’s Hong Kong films can still be appreciated by North American audiences for their stunt work and physical comedy, Chow’s films are more of an acquired taste. Mo lei tau comedy is so ingrained in Hong Kong pop culture that many believe it cannot be properly translated for non-Asian audiences. However, those with a demented sense of humour and an appreciation for the bizarre are sure to get a kick out of The God of Cookery and many of Stephen Chow’s other works. The God of Cookery is one those comedies where you may not entirely understand why you’re laughing, but all that matters is that you are.