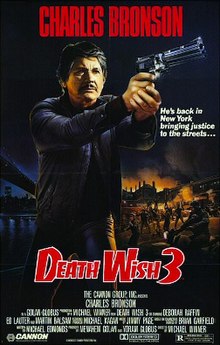 This week, I shall be covering one of the most entertaining bad movies of all time and I honestly had no idea whether to classify it under “Robin s Underrated Gems” or “Robin’s Underrated Crap”. In the end, I chose the latter because I haven’t done an edition of “Robin’s Underrated Crap” in awhile. Earlier this week, British director Michael Winner passed away at the age of 77. Winner was best known for his collaborations with Charles Bronson as they made a total of six films together, their biggest hit being the 1974 vigilante action picture, Death Wish. Winner would go on to direct two sequels to that film and while the original Death Wish was first and foremost escapist entertainment, it at least made an attempt to explore some serious issues about vigilantism. The Death Wish sequels, on the other hand, did not. There would be four sequels altogether, many of which were produced by the infamous Cannon Group, who specialized in ridiculously stupid and trashy action pictures (many of starring Charles Bronson and Chuck Norris) throughout the 1980s. While Death Wish II was universally regarded as terrible, it is a pretty generic and forgettable film overall. But Death Wish 3… that’s another story altogether. This, quite simply, is one of the most batshit insane action movies of all time. Out of all the Death Wish sequels, this one has garnered a substantial cult following because of how hilariously over-the-top it is. I have no idea if the people responsible for this film genuinely thought they were making a serious drama or if any of them realized how funny the material really was, but the end result provides so much entertainment value. All I ever ask from a bad movie is that it never commit the cardinal sin of being boring and, believe me, there is not a dull moment to be found in Death Wish 3.

If you re not familiar with the original Death Wish, it told the story of Paul Kersey (Charles Bronson), a mild-mannered architect from New York City who turns to vigilantism after muggers murder his wife and rape his daughter. Kersey’s daughter is left so traumatized by the experience that she becomes a catatonic and is institutionalized. Believe it or not, when she is finally released from the institution In Death Wish II, she is abducted and raped by muggers on the EXACT SAME DAY, but this time, she is killed. It becomes a recurring gag throughout the Death Wish series that Paul Kersey is one of the most cursed human beings of all time since anyone whoever gets close to him is murdered and he winds up having to avenge them. In Death Wish 3, Kersey has returned to New York to visit an old war buddy named Charley, but of course, the poor guy is beaten and murdered by punks right before Kersey arrives. Charley’s apartment building is located in a neighbourhood which is pretty much a post-apocalyptic warzone, as it has been taken over by a vicious gang who terrify the local residents. The gang is run by a scary dude with a reverse Mohawk named Fraker (Gavan O’Herlihy) and the police are powerless to stop them. When a local police lieutenant named Shriker (Ed Lauter) recognizes Kersey as the infamous New York City vigilante from ten years ago, he makes a secret deal with him: kill all the punks you want and we’ll look the other way. Kersey’s first kills take place a half hour into the film in one of the most hilariously deadpan scenes of violence I’ve ever seen. Kersey buys a new car and parks it outside the apartment building. He is having cabbage rolls for dinner with a nice old Jewish couple when he hears two gang members breaking into his car outside. They instantly wind up regretting their decision…

After this, Kersey knows that he will be engaged in a full-fledged war with Fraker and his gang, so he mail-orders a .475 Wildey Magnum for protection.

Kersey finally gets to test out Wildey in a hilarious scene where he takes out another gang member called “The Giggler” (who got that name because he, uh, giggles a lot). Kersey is in the midst of eating an ice cream bar when he uses a brand-new camera as bait to shoot the Giggler, which causes the entire neighbourhood to break out into spontaneous cheering!

Scenes like this really make me wonder if the filmmakers intended Death Wish 3 to be some sort of tongue-in-cheek black comedy, or if they were really just that clueless about how unintentionally funny they were. There really isn’t much more plot to describe here. It basically involves Kersey using Wildey and other assorted firepower to defend himself and the law-abiding residents of the neighbourhood from Fraker and his gang. However, the film has numerous hilarious elements which are worth discussing…

Kersey becomes involved with a public defender named Kathryn Davis (Deborah Raffin), but from the moment she appears onscreen, you know she s toast, and the entire purpose of her existence in the movie is to give Kersey someone to avenge. No joke, EVERY SINGLE WOMAN Paul Kersey got romantically involved with in the Death Wish series wound up being killed! In this case, the movie’s idea of developing their relationship is an exchange which establishes that they, uh, both like chicken.

The apartment building that Kersey frequents is just filled with ethnic stereotypes, including the aforementioned old Jewish couple. It also contains a Puerto Rican couple and the wife, Maria, is played by a pre-Star Trek: The Next Generation Marina Sirtis. Maria is constantly harassed by the punks until she is eventually raped and murdered. Incidentally, since a lot of famous actors inexplicably got their start playing muggers in Death Wish movies (including Jeff Goldblum, Denzel Washington and Laurence Fishburne), look for a pre-Bill & Ted s Excellent Adventure Alex Winter as a punk in this scene.

It s worth noting that Marina Sirtis is a London-born descendant of Greek parents and is not Puerto Rican, but she presumably got the role because they filmed the movie in London and needed a dark-skinned actress for the role. The very few lines of dialogue she has in this film are in Spanish and were clearly dubbed over in someone else’s voice. Like pretty much all the female characters in the Death Wish universe, she exists for the express purpose of getting killed and giving her husband a reason to avenge her. The most memorable character in Death Wish 3 is probably Bennett (Martin Balsam), an old war veteran who befriends Kersey and has a solution for fighting off the gangs: a .30 Browning machine gun which he is keeps IN HIS FRIGGIN’ CLOSET!

In another classic sequence, the gang destroys Bennett s shop, causing him to reach his breaking point. He then snaps by pulling the giant machine gun out of his closet and making a failed attempt to use it on the punks. Maybe it’s just me, but I’ve always found it hilarious that Bennett’s shop is called “Bennett’s Taxi Meter Repairs”. I mean, are broken taxi meters really such a common problem that you can build an entire business around that?!

Anyway, the Browning machine gun eventually makes its way into Kersey s hands for the big action climax. And man, oh man, what a climax it is! Basically, Kersey teams up with Lt. Shriker, the cops and the neighbourhood residents team up to wage an all-out war with Fraker and his gang and the body count is HUGE! Even though the heroes are supposed to be protecting the neighbourhood, they cause so much carnage and property damage that they’ve probably wound up rendering the area unlivable. The original Death Wish at least made an attempt to examine the issue of whether vigilantism was a solution to crime or an additional problem. But in Death Wish 3, the message is basically that, yeah, taking the law into your own hands kicks ass! The film’s climax is pretty much a wet dream for the NRA and believers of second amendment rights, as it features ordinary citizens pulling out weapons and blowing bad guys away to protect their homes. The whole thing is basically one of the most insane, ultra-violent, yet delightfully entertaining action sequences of all time. I’ll just say that if you really love scenes of people getting shot and falling off of rooftops, Death Wish 3 is going to become your new favourite movie of all time.

It goes without saying that in Death Wish 3, little things like plot, characterization, logic, credibility and good taste take a complete backseat to violence and carnage. Charles Bronson was 63 years old at the time this movie was released and often received a lot of criticism for doing action films at that age. The ironic thing is that using older action stars has now become a popular trend in movies like The Expendables, so the sight of a 63-year old Bronson firing off a machine gun would not look out of place at all today. These films were hardly a vehicle for Charles Bronson to showcase his acting range, but to his credit, he always managed to play this absurd material with a completely straight face. If Death Wish 3 was always intended to be a comedy, Bronson certainly doesn’t show it. But then, this is the same actor who once had to play a serious dramatic scene expressing rage over the destruction of his watermelons! No discussion of this film would be complete without mentioning the hilariously cheesy electronic score by Jimmy Page, of all people! Page composed the music for both Death Wish 2 & 3 and (with good reason) was never asked to do a film score again. You can always tell a dramatic moment is taking place in Death Wish 3 when you hear Page mashing the synthesizer with his fist on the soundtrack. So, in the end, how does one classify Death Wish 3? Is it a brilliant black comedy or an inane, morally reprehensible clusterfuck of epic proportions? I would probably bet on the latter, but if you want to view the film the other way and believe that the late Michael Winner was some sort of comedic genius, that’ s perfectly fine too. Whatever its intentions, Death Wish 3 is still tremendously entertaining. Even those who normally don’t enjoy watching bad movies should give this one a try as it’s hard not to have a blast watching it. I’d call Death Wish 3 the poster child for how to make a great bad movie, but then, nobody really sets out to make a movie this bad, do they?