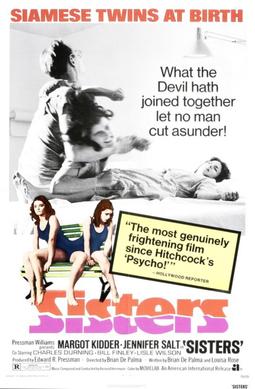 Brian De Palma is one of those directors who just seems to keep popping up in “Robin s Underrated Gems”. Of course, reactions to his work have traditionally been divisive: is he a gifted filmmaker who makes movies which are loving tributes to Sir Alfred Hitchcock, or is he just a hack who copies and rips off Hitchcock at every opportunity? Of course, I don’t have to tell you that I fall into the former camp and have always thought that De Palma was terrific at borrowing ideas from other filmmakers and finding unique ways to build upon them with his own distinct style. Of course, the beginning of De Palma’s obsession with Hitchcock can all be traced back to one film: Sisters. De Palma started out his career in the late 1960s directing low-budget black comedies such as Greetings, The Wedding Party and Hi Mom!. Although these films are notable for featuring some of Robert De Niro’s earliest performances, they didn’t exactly set the world on fire and De Palma’s career never really took off until he decided to enter the thriller genre. In 1973, he wrote and directed Sisters, a film which was constructed as the ultimate homage to Hitchcock. The film borrowed numerous ideas from such Hitchcockian classics as Psycho, Rear Window and Spellbound, and De Palma even went so far as to bring in Hitchcock’s long-time composer, Bernard Herrmann, to do his musical score. While paying homage to the works of famous directors is such is a common technique amongst aspiring filmmakers today, it wasn’t as common a practice back in 1973. Sisters could have easily been written off as nothing more than a Hitchcock rip-off, but De Palma was able to make his film stand on its own as a solid horror-thriller.

Sisters opens with a young black man named Philip Woode (Lisle Wilson) getting dressed in a change room when a blind woman suddenly walks in and starts undressing. It turns out that Philip is an unwitting contestant on a Candid Camera-style game show called “Peeping Toms”, which is based around a concept that would not be out-of-place in today s world of sleazy reality television. The show sets people up and secretly films them in situations to gauge whether or not they are perverts, and the “blind” woman is actually a French-Canadian model named Danielle Breton (Margot Kidder). Since Philip decides to be a gentleman and turn away while the supposedly blind Danielle is undressing, she decides to go on a date with him. They seem to hit it off well, but there are ominous signs throughout the evening. At dinner, they are harassed by Danielle’s ex-husband, Emil (William Finley), who follows them to her apartment. While making out, Philip discovers a large, ugly scar on Danielle’s hip. And after spending the night together, Philip wakes up to hear Danielle arguing with another woman whom she claims is her twin sister, Dominique. It’s gradually revealed that Danielle and Dominique used to be Siamese twins who were recently separated, and Emil was the doctor who performed the operation. For his first major homage to Hitchcock, De Palma takes a page out of Psycho‘s playbook by killing off the person who has been set up to be the main character. After going out to buy a birthday cake for Danielle, Philip returns to her apartment and is brutally stabbed to death by Dominique.

De Palma then goes from Psycho into Rear Window territory, as Philip is able to crawl to the window to signal for help before dying and is seen by Grace Collier (Jennifer Salt), a reporter who lives in an adjacent apartment building. Grace instantly calls the police to report a murder, but since she is known for writing articles which are critical of law enforcement, she is met with scepticism. When the police finally do arrive to investigate Danielle s apartment, Emil has already disposed of Philip’s body, gotten rid of any incriminating evidence, and there is no sign of Dominique. Since Grace is already on the cops’ shit list, they instantly dispel all her claims of murder, so she is forced to investigate the crime on her own. After reading this plot summary, I’d say there’s a very good chance that most of you have already guessed the story’s final twist. But that really isn’t De Palma’s fault, however. This type of twist has been done to death in thrillers during the past 40 years, but at the time Sisters was released, it was still relatively fresh. Of course, if you’ve seen Psycho, you’ll probably also guess the twist here, but it just seems to fit with the whole Hitchcockian flavour of the film. Like I said before, De Palma unabashedly borrows a lot of ideas from Hitchcock, but adds his own inventive touches to the proceedings. After the very Hitchcockian murder of Philip, De Palma follows it up by staging a very clever split-screen sequence which showcases both Danielle and Emil disposing of Philip’s body and Grace is dealing with the police. This effectively builds a lot of tension and leaves the viewer wondering whether Grace and the cops will make it to the apartment before all evidence of murder has vanished. Late in the film, Grace visits a mental asylum where Danielle and Dominique used to reside.

The stuff at the mental asylum delves into psychological territory which was previously covered in Hitchcock’s Spellbound, but once again, De Palma showcases his own unique, distinct style and after Grace is placed under hypnosis, the director delivers a climactic nightmare sequence which is sure to give you the willies. But even if you didn’t know it was meant as a homage to Hitchcock, Sisters would still work very well as a standalone thriller. The film is greatly enhanced by the creepy electronic score by Bernard Herrmann, which is just as effective as most of the scores he did for Hitchcock. Herrmann would also do the score for De Palma’s Obsession before his death in 1975 and the director would soon bring in composer Pino Donaggio to function as his own personal Bernard Herrman for many of his thrillers. Sisters also benefits from strong performances by its two leads, with Jennifer Salt making a very effective heroine and Margot Kidder doing a solid job of embodying the diverse personalities of Danielle and Dominique. The two actresses were actually roommates at the time and struggling with their acting careers, and word is that De Palma cast them in these roles by giving them both the script for Sisters as a Christmas gift. Other effective performances are delivered by William Finley (a frequent De Palma collaborator who would play the title role in his next film, Phantom of the Paradise) as the ultra-creepy Emil, and the always-reliable Charles Durning as a private investigator who is hired by Grace and finds himself in the fruitless pursuit of a sofa concealing a dead body, which leads to a much-debated open ending. While Sisters was the film which put Brian De Palma on the map and helped established the path his career would take, it’s still not one of his most well-known films, and remains somewhat underrated. Like many of De Palma’s films, Sisters is often very melodramatic, excessive and over-the-top, but that’s only part of its charm. When Brian De Palma is at the top of his game, there are very few directors who more energy and life.