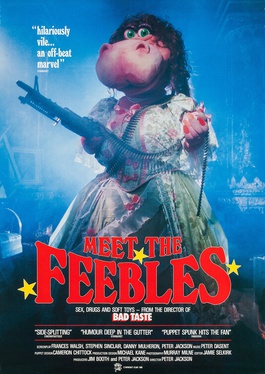 It s always a joy when a cult director who started out their career making low-budget horror flicks and B-movies finally reaches the top of the mountain and wins an Academy Award. When Peter Jackson took home a “Best Director” Oscar for The Lord of the Rings: The Return of the King, he used his acceptance speech to make mention of one of his earliest films, Meet the Feebles, and joked that it was “wisely overlooked by the Academy”. If you weren’t familiar with Meet the Feebles, you cannot imagine how surreal it was to see that movie mentioned at the Academy Awards. Quite frankly, I feared that if the Academy ever sat down to watch Meet the Feebles, they’d order Peter Jackson to give his Oscar back. Jackson’s debut film was Bad Taste, which he filmed over the course of four years in his native New Zealand. The project was an ultra-glory splatter comedy about aliens kidnapping humans and turning them into food, but what it lacked in budget, it made up for with inventiveness, and both the film and the director wound up garnering a cult following. Jackson originally intended for his renowned zombie horror comedy, Braindead (a.k.a. Dead-Alive), to be his follow-up film, but when the project was put on hold, he decided to try something truly demented: a politically incorrect spoof of the Muppets. The story would be a behind-the-scenes expose about the dark side of a family-oriented variety show, but the twist is that the characters were puppets or people in animal costumes. The end result was Meet the Feebles, a very depraved, raunchy, offensive black comedy that will totally ruin your image of the Muppets, but also happens to be laugh-out-loud hilarious at times.

The Feebles are a Muppet-like theatre troupe made up of animals who perform in a musical variety show called the “The Fabulous Feebles Variety Hour”. As the movie begins, they are preparing for a live prime time special set to air that night which, if successful, could lead to the show being picked up as a syndicated television series. Like the Muppets, the Feebles are cheerful, innocent characters who convey positive messages, but behind the scenes, it s a much different story with them. The manager of the Feebles is a walrus named Bletch, who is also engaged in drug dealing and other corrupt activities. He is married to a singing hippo named Heidi, who is the star attraction of the show, but has become an overweight train wreck. Bletch is currently having an affair with a cat named Samantha and is grooming her to take Heidi’s place. Some of the other troubled performers include Harry the Hare, a sex addict who becomes infected with an STD which causes his body to fall apart; Sid the Elephant, who is facing a paternity suit for conceiving an illegitimate child with a chicken named Sandy; and Wynyard the Frog, the heroin-addicted knife thrower who keeps having flashbacks to his traumatic experiences in Vietnam. The director of the show is a fox named Sebastian, a miserable prissy snob who pretty much ruins the show by performing a side-splittingly hilarious musical number about sodomy.

Yes, it’s quite bizarre to think that New Line Cinema once looked at a guy who filmed puppet porn early in his career and said: “THIS is the guy we’re entrusting with the Lord of the Rings trilogy!”. Peter Jackson originally intended Meet the Feebles to be the pilot for a potential television series, but after some unexpected interest from Japanese investors, it was expanded into a feature-length film. To be fair, the final product often does resemble a short film that’s been padded out to feature length as the narrative is pretty slapdash and all over the place. Not everything in the film works and while many of the gross-out moments are quite witty and clever, some of them just exist for the sole purpose of repulsing the viewer and don’t have any real context. The production frequently ran into budget and scheduling problems and one sequence, a flashback to Wynyard’s experiences in Vietnam, had to be funded with money straight out of the crew’s pockets. However, even though this sequence only seems to be in the film to fill time, it’s a pretty damn funny parody of The Deer Hunter.

In the grand scheme of things, Meet the Feebles does have a lot more hits than misses. The film is a very clever satire of celebrity worship and how beloved famous people can be a lot less likable when they’re away from the camera. Even though none of the characters here are human, lot of the story’s satirical points are more relevant today than ever before. Considering that the budget was only around $750,000, the idea of doing an entire film with puppets and actors in animal suits must have seemed insane, but Jackson and his crew do a very good job at pulling off this very daunting and ambitious task. But most importantly, the film is frequently hilarious and even the most low-brow gag can sometimes cause you to go into unexpected hysterics. This scene involving a Hindu contortionist who gets his head stuck in the worst possible place never fails to make me chuckle.

Meet the Feebles was a commercial failure upon its initial release, and I’d be amused to find out how many people stumbled into the film thinking it was some lightweight family comedy and wound up becoming traumatized by the experience.  It didn’t receive an official release in North America until 1995 after Jackson had already achieved mainstream respectability by directing Heavenly Creatures (and who knows how many fans of that film were seriously taken aback when they saw this one?). In the years following its release, Meet the Feebles was considered to be one of the most offensive films ever made, but in the era of the Internet and Rule 34, would someone watching it for the first time today still find it as shocking? Whatever the case, those with a demented sense of humour and a strong stomach are well-advised to check this movie out. In spite of its gross-out content, Meet the Feebles is an undeniably funny and clever piece of dark comedy and, if nothing else, it’s a very interesting case study of how even the most successful Hollywood directors can come from the most unlikely places. If you were to go through the career filmographies of every single Academy Award-winning director, I’m sure you wouldn’t find a more improbable title listed than Meet the Feebles.