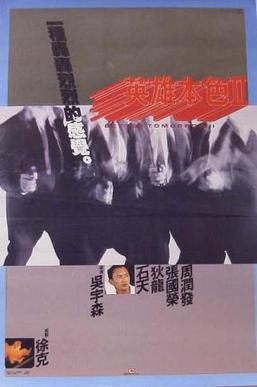 In 1986, the world of Hong Kong cinema was changed forever with the release of John Woo’s action crime drama, A Better Tomorrow. Even though it wasn’t expected to make much of an impact, the film became a smash hit in Asia and broke box office records. It revitalized Woo’s fledgling directorial career and turned Chow-Yun Fat into an international superstar after his memorable performance as gangster Mark Lee. A Better Tomorrow was one of the very first examples of the “heroic bloodshed” sub-genre, which could best be defined as ultra-violent action films with an emotional arc. Heroic bloodshed films were often gangster stories which focused on such themes as honour and loyalty in between some highly stylized gunfight scenes, a.k.a. “gun fu”. A Better Tomorrow helped garner international attention for Hong Kong action cinema and Woo’s follow-up films, such as The Killer and Hard-Boiled, helped popularize it. Following the massive success of A Better Tomorrow, it was perhaps inevitable that a sequel would be rushed into production. Only one year later, A Better Tomorrow II was released and it did indeed feel like a rushed sequel. The finished product is a bit of a mess at times and there was so much behind-the-scenes turmoil that John Woo has pretty much disowned the film. However, A Better Tomorrow II is a prime example of a movie where the awesome parts are SO awesome that you can’t help but love it!

At the end of A Better Tomorrow, former Triad counterfeiter Ho (Ti Lung) willingly surrendered himself to his police officer brother, Kit (Leslie Cheung), and at the beginning of this film, Ho is serving his sentence in prison. Ho learns that Kit is currently working on an undercover operation which involves spying on Lung (Dean Shek), a crime boss who happens to be Ho’s former mentor. Ho agrees to also go undercover in Lung’s organization in order to protect his brother. However, Lung is soon double-crossed by his right-hand man, Ko (Kwan Shan), who frames Lung for murder and takes over his operation. Ho and Kit decide to send Lung to New York City to hide out while they attempt to bring down Ko. And herein lies a major dilemma which A Better Tomorrow II had to face. One of the biggest reasons for the success of the original A Better Tomorrow was the charismatic presence of Chow Yun-Fat. The only problem is that his character, Mark, was killed off at the end of the film. Would audiences be all that interested in a sequel without Chow Yun-Fat? Well, don’t worry, they just dreamed up the cheapest, most contrived excuse imaginable to bring him back. In a plot device that would be stolen when City Slickers II: The Legend of Curly’s Gold needed a reason to bring back Jack Palance, it turns out that Mark actually had a twin brother named Ken! And, lo and behold, Ken just happens to own a restaurant in New York and he’s available to help out Lung. However, the moment you watch Chow Yun-Fat’s hilarious introductory scene where he forces a mob boss to eat fried rice at gunpoint, you realize this film wouldn’t be the same without him and forgive the ridiculous contrivance.

Anyway, it’s not long after arriving in New York that Lung learns that his daughter has been murdered. The traumatic news turns him into an insane catatonic and Ken is forced to nurse him back to health. However, you know it won’t be long before Ken, Lung, Ho and Kit will all join forces to go after Ko’s organization and generate one of the largest body counts ever seen in an action film. Like I said earlier, the plot of A Better Tomorrow is a bit of a mess. The original cut of the film was 160 minutes long, but producer Tsui Hark wanted the film trimmed down to a more commercially viable length and decided go behind John Woo’s back to do it. In the end, the movie was literally handed over to an editing unit, who wound up providing a 104-minute final cut without any directorial supervision whatsoever. There are times when A Better Tomorrow II is incredibly choppy and you can understand why Woo would be so dissatisfied with it. Yet in spite of all this chaos, the film is absolutely irresistible. I don’t know what it is, but Hong Kong action cinema often knows how to handle campy and melodramatic material, which is in abundance here. If an English-language version of this film had been produced by Hollywood, it would have been laughably bad. However, the actors play it with such emotion and sincerity that they somehow make it work. For instance, the whole story arc of Ken attempting to stir Lung out of catatonia is SO corny, yet it all builds up to a very satisfying shootout sequence and you can’t help but cheer when the big payoff arrives. Incidentally, during this scene, Chow Yun-Fat provides what may be cinema’s greatest delivery of the phrase, “fuck you”.

Of course, the big draw of A Better Tomorrow II is John Woo’s action sequences and the world “spectacular” doesn’t even begin to describe them. Woo’s action scenes have often been described as a ballet of violence and when audiences originally saw his stylized brand of action in A Better Tomorrow, they were blown away. So of course, Woo had to keep topping himself in all his subsequent films. The final 20 minutes of A Better Tomorrow II are some of the finest action cinema ever produced. After a surprisingly poignant death for one of the major characters, the film builds up to a truly awesome climax where the heroes invade Ko’s mansion and literally take down 118 bad guys by themselves. Don’t believe that number? Check out this video featuring the full “body count” tally for the film.

After watching the ending, all other flaws about A Better Tomorrow II are instantly forgiven and the whole climax remains one of the most violent and influential action sequences ever filmed. While A Better Tomorrow II does commit a lot of the cardinal sins which many sequels tend to make, it’s virtually impossible to dislike this film. Even though it has been disowned by the director and is not ranked up there alongside other John Woo classics like The Killer and Hard-Boiled, A Better Tomorrow II is still a riveting piece of cinema. It delivers the goods in the most electrifying ways possible and manages to succeed through the sheer force of willpower.