Runstedler’s DVD Pick of the Month: Don’t Torture a Duckling

Posted on April 16, 2014 by curtisrunstedler 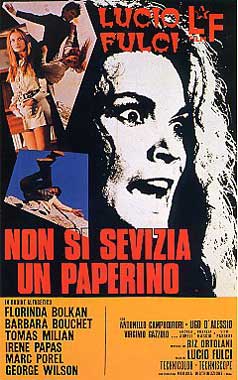 Lucio Fulci’s extraordinary and most personal film Don’t Torture a Duckling was released in 1972. It follows the Italian giallo style of filmmaking with a twist; instead of young women being pursued and murdered by a mysterious assailant (a la Dario Argento in Tenebre, Suspiria, etc), the murderer kills off the young boys in a small Italian village. Fulci brilliantly confronts cultural taboos, including paedophilia, and religion, specifically paganism and Catholicism. Fulci’s film feels deeply personal, from the rich cinematography to the small town sentimentalities.

When I watch this film, I feel like I’ve met these mischievous little boys insulting the town eccentric in life. It feels like you’re running among them and it’s startling when they start dying because it is almost as if a piece of you has died with them. The scene where Michele’s beautiful guest tries to seduce him initially seems fantastic, but when you reconsider the situation her proposition seem a bit alarming, considering the boy’s age and all. These scenes leave impressions in your mind. Fulci exposes us to these topical issues and also manipulates the narrative, changing perspectives and killing off false protagonists and major characters as the story progresses. As mentioned earlier, the film is also a harsh indictment of religion, condemning both the pagan actions of the town’s Gypsy witch as well as the Catholic Church’s influence. I felt that the pagan elements were a bit misogynistic and inaccurate, but their inclusion still makes for interesting plot twists. Regarding the story itself, the boys start dying after teasing and humiliating the local eccentric, and as the body count starts piling up, a local journalist and the aforementioned tenant Patrizia investigate. I wasn’t sure how to feel about Patrizia. I admired her independence and intelligence (and she’s gorgeous too), but her taboo interests bothered me, and I’m not sure if that’s more misogyny on Fulci’s part or what.

These conflicted feelings make her a bit problematic in terms of appreciating her as a central figure in the plot. The townspeople initially suspect the witch as the culprit of the serial murders, but there’s more to it than that. Ultimately, Don’t Torture a Duckling is compelling and one of Fulci’s best films. The story is very engaging and will catch you off guard, and the landscapes and vistas are beautiful to behold. Before this film, I had only watched his horror films Zombi 2 and The Beyond, which are both excellent horror additions, but now I’m curious to see what his non-horror contributions have to offer. Time will tell.