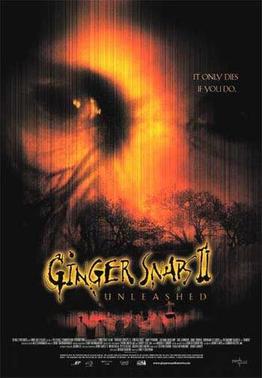 While hunting for the perfect werewolf film after a series of mishaps (Bad Moon, Silver Bullet, et cetera), I decided to watch this film and I was genuinely surprised and delighted with the results. Ginger Snaps 2: Unleashed is the first sequel to Ginger Snaps (one of my favourite Canadian films and probably THE best werewolf film out there, and yes, it’s much better and more sophisticated than Dog Soldiers), and it’s actually just as good as the first.

The story takes place shortly after the events in the first film, with Brigitte (Emily Perkins) coping with her sister’s death and trying to prevent her own transformation with intravenous monksblood injections. She has a persistent werewolf follower though, and their encounter leads to confinement in a mental institution, where she meets a medley of characters, including the enigmatic girl Ghost (Tatiana Maslany), Beth-Ann (Pascale Hutton), Alice (Janet Kidder), and the rapey attendant Tyler (Eric Johnson). The story is excellent, and it’s great to experience more of Brigitte’s narrative as her character (literally) transforms and develops. Ginger (Katharine Isabelle) appears to Brigitte in dreams and hallucinations, offering advice and wit. It’s good to see her again. The chemistry between them helped drive the first movie, but here it’s more focused on Brigitte’s story. Brigitte is a really interesting character though, so while there is a slight absence, her personality and resourcefulness and morbid wit more than make up for it.

Like the original movie, the setting is gloomy and macabre and the plot is full of exciting twists and turns. While the first film conveys ideas of horror and sexuality more effectively, I really admired Brigitte’s independence and perseverance, as well as the recurring supernatural manifestations in the film. Ginger Snaps was more about human experiences with sexuality and the monstrous, whereas Ginger Snaps 2 features a lingering malevolent presence in the shadows, watching and preying. It’s an uncomfortable feeling of being watched, an outsider (the male werewolf) closing in with sexual intent, which perhaps acts as an indictment of rape culture. With regards to the other characters, I thought that Ghost was pretty annoying, albeit full of surprises, although her role has purpose to the story’s events. I would have liked to have seen more character development with the other folks in the mental institution, although I suppose their stories and purposes are not central to the narrative. The morbid humour and dark subject matter is not for everyone, but then again maybe that’s what gave it cult status to begin with. Ginger Snaps 2 is a great film overall. It’s too bad that Ginger Snaps Back: The Beginning (the second sequel) doesn’t live up to the same calibre as the first two.