Posted on August 5, 2014 by curtisrunstedler 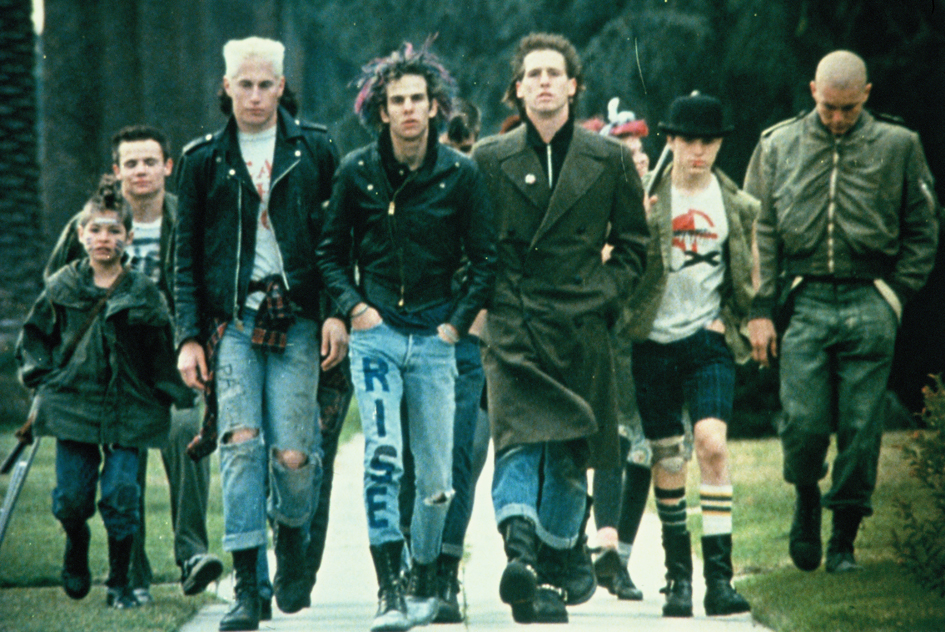 This raw and gritty film looks at the hardcore youth punk lifestyle in ’80s California. It’s brutal and uncompromising, and features some great live performances from The Vandals, T.S.O.L., and D.I. To give you an idea of the film’s brutality, within the first five minutes, a toddler is graphically mauled to death by a stray dog. Director Penelope Spheeris approaches the topic of disillusioned and abandoned youth with a realist scope, and apparently the unprofessional actors were actually recruited local punks.

Evan decides to leave his house and his alcoholic mother, and while checking out a local gig, he meets Jack, who is the leader of a punk gang called The Rejects (T.R.) and welcomes into their club. Other members include Sheila, a sexually abused girl who ran away from home, rat-loving Razzle (he is played by Red Hot Chili Peppers’ bassist Flea and arguably has some of the best lines, such as ‘Happy Easter, asshole!’ after contaminating a dickhead 7/11 clerk’s pickled egg jar), two girls who love fairy tales, an addict, Joe Shmo (who left his house because of his father’s homosexual relationship), and eventually Evan’s younger brother Ethan, whom he rescues after his mother crashes her car.

The gang tries to survive and make a life for themselves in their abandoned house, but society is unwilling to accept or respect them, particularly two local assholes named Jim and Bob, who constantly assault and attack them and respect the ignorance and bigotry of society, venting their suburban frustration and inadequacies upon the youth. The documentary feel of the film provides a compassionate portrait of these young people, who prove to be capable, enterprising, and intelligent, but are sadly unrecognised, apart from the sympathetic local black cop Bill, who is also Jack’s stepfather. The tragic ending of the film reflects the harsh reality of the opening scene, and it seems that the film comes full circle. I liked this movie much better than Over the Edge, which it is often compared to, because it is much more personable and interesting. I appreciated how they think for themselves and make their own decisions. It’s unfortunate that society cannot reciprocate. It’s an ultra low budget film that’s done well that offers a lingering darkness to the glamour and glitz of ’80s nostalgia. In the end, it’s not the young punks who are a threat, but the very society that rejects them to the fringes.