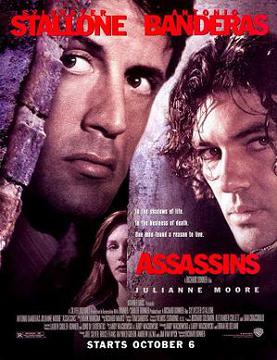 One of the most unfortunate cinematic failures of 2014 is The Expendables 3, as a disappointing “PG-13” rating and the film being leaked out onto the Internet weeks before its release paved the way to a very lackluster performance at the box office. The Expendables 3 wasn’t a terrible film, but considering the cast, it should have been a hell of a lot more fun. However, one of the film’s bright spots was Antonio Banderas, who pretty much stole the show as an overly talkative action hero with a child-like enthusiasm about joining up with “The Expendables”. Banderas’ interactions with Sylvester Stallone were some of the biggest highlights of Expendables 3 and made me harken back to 1995 when the duo teamed up for the first time to make an action yarn called Assassins. After becoming a star in his native Spain, Banderas started acting in American films in the mid-1990s and his turn in Robert Rodriguez’s Desperado helped establish him as a new Hollywood action hero. After the ultra-stylish, balletic gunfights in Desperado, teaming Banderas up with Sylvester Stallone in a Richard Donner-directed action film loaded with gunplay seemed like a can’t miss-prospect, but unfortunately, Assassins turned out to be a commercial and critical failure. However, looking back on it now, Assassins is surprisingly good. It’s not a classic by any means and contains moments of sheer absurdity, but it’s well-crafted and consistently entertaining. Assassins also has some historical significance since it’s based on an original spec script which just happened to be the first Hollywood project by Larry and Andy Wachowski.

The protagonist of this story is Robert Rath (Sylvester Stallone), a veteran assassin who is considered to be the very best in his business. Like virtually all “good guy” assassins in the movies, Rath has become burnt out by the profession and wants to get out, so he agrees to accept one final contract before retiring for good. However, just as Rath is about to fulfill his contract, a younger assassin named Miguel Bain (Antonio Banderas) suddenly shows up at the scene and kills Rath’s target instead. Rath makes a failed attempt to kill Bain, so Rath begrudgingly agrees to accept another high-paying final contract. This one involves the assassination of a computer hacker named Electra (Julianne Moore) and the retrieval of a highly sensitive computer disk she is attempting to sell off. Not surprisingly, Bain shows up to take this contract as well. Rath develops a crisis of conscience about assassinating a woman, so he decides to help Electra and Rath’s anonymous contractor attempts to have them killed. A cat-and-mouse game develops as Rath and Electra attempt to make a huge payday by selling the computer disk back to the contractor, who has hired Bain to kill them both. It all builds up to lengthy climax where Rath withdraws a $20 million payoff from a Mexican bank while Bain waits to assassinate him with a sniper’s rifle from an abandoned hotel across the street. Rath hopes to outsmart his rival by staying inside the bank for so long that Bain will crack under pressure while waiting to kill him.

Many of the original reviews for Assassins gave the movie a lot of flack for the story’s protracted third act at the bank, which takes up nearly 40 minutes. In a way, Assassins is almost like two separate movies. The first half contains a lot of explosive, action-packed setpieces which Richard Donner could do in his sleep, but the second half slows down considerably when the story moves down to Mexico and focuses more on the psychological cat-and-mouse game between the two rival assassins. The movie is uneven, to be sure, but personally, I like both halves of the film. The third act is a lot slower and deliberately paced than you’d expect from a Hollywood action film directed by Richard Donner and produced by Joel Silver, but I think it works pretty well, mostly because of the strong chemistry between Sylvester Stallone and Antonio Banderas. It’s somewhat ironic that the two macho action stars come across better than the highly respected Oscar-nominated actress in this film. Julianne Moore is actually the weakest link here and while there’s nothing really wrong with her performance, she’s a pretty odd casting choice to play an eccentric computer nerd and her character is prone to making some ridiculously stupid decisions (such as putting herself at risk by sneaking out of her hotel to attend a Mexican “Day of the Dead” parade). Stallone, on the other hand, gives one of his better performances with a surprisingly understated portrayal of Rath. It provides a nice contrast to Banderas, who delivers a flamboyantly over-the-top portrayal of the psychotic Bain and injects the movie with a huge dose of energy whenever he’s onscreen. The best moments in the movie involve Rath and Bain’s interactions together, such as this early sequence where the two rivals have a stand-off in taxicab while separated by bulletproof glass.

While the plot of Assassins is filled with contrivances and lapses in logic, the setpieces are often cleverly constructed and you can give a lot of credit to the film’s original writers, Andy and Larry Wachowski. After their script was sold to Warner Bros., Brian Helgeland was brought in to do some rewrites on it. The Wachowskis were so upset by the changes that they made an unsuccessful attempt to have their names removed from the film’s credits. However, having compared both drafts of the script, I can honestly say there weren’t that many drastic changes to the Wachowskis’ version and the only crucial difference was that the love story between Rath and Electra was originally fleshed out much better. The central cat-and-mouse game between the two lead characters definitely originated from the Wachowskis and you can see how this story influenced their eventual directorial debut, Bound. In fact, after watching Bound, Joel Silver reportedly regretted his decision to have rewrites done on the Assassins script and he made it up to the Wachowskis by allowing them to direct their own screenplay for The Matrix. Obviously, that decision worked out well for all parties, but since the Wachowskis have pretty much only done sci-fi/fantasy material since then, I would like to see them make a return to more small-scale, character-driven stories like Bound and Assassins. Anyway, Assassins has pretty much become a forgotten footnote in the careers of everyone involved in the film, but I still think it’s underrated. It’s a more somber effort than you’d expect from that era of action cinema, but it’s still pretty fun and the entertaining performances from the two stars make it worth watching.