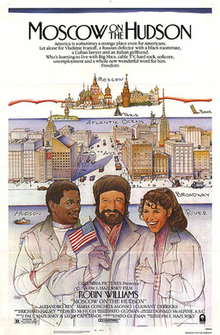 It goes without saying that the recent suicide of Robin Williams was one of the most shocking celebrity deaths of all time. Sadly, the year 2014 has been chock full of them. Another famous artist who left us this year was director Paul Mazursky, who passed away on June 30 at the age of 84. However, given the close proximity of their deaths, it only seems appropriate that Paul Mazursky would have directed one of Robin Williams’ more overlooked and underrated performances. In 1984, Williams was already a very successful stand-up comedian and a major television star after his work on Mork & Mindy. He had already transitioned into a film career with notable roles in such movies as Popeye and The World According to Garp, but when Williams teamed up with Paul Mazursky to make a comedy-drama called Moscow on the Hudson, people finally started to take note of his immense range as an actor. While Moscow on the Hudson was a perfect vehicle for Williams’ comedic skills, it was also one of the first projects to really showcase his capability as a dramatic actor. In the film, Williams played a Soviet Russian who defects to the United States, a role which easily could have devolved into a cartoon. However, Williams put so much preparation into his role that his character came across as a thoroughly believable, three-dimensional human being and not many Hollywood actors could have pulled this off.

Robin Williams plays Vladimir Ivanoff, a Russian who lives behind the Iron Curtain in Moscow. Vladimir makes his living as a saxophone player for the Moscow circus and while he seems content with his job and his life, the opening scenes establish that living in the Soviet Union under a communist regime is not an ideal existence. Vladimir shares a small apartment with his immediate family and has to borrow a friend’s place if he ever wants to have sex with his girlfriend. Citizens are forced to stand in long line-ups to acquire such items as toilet paper and anyone who dares speak out against the Soviet government can be made to disappear. However, a major opportunity comes Vladimir’s way when the Moscow circus travels to New York City for a performance. Vladimir’s friend, Anatoly (Elya Baskin), openly announces his intention to defect to the United States during the trip, but eventually loses his nerve. But right before the circus troupe is scheduled to head back home, Vladimir makes a spontaneous decision to defect during a shopping trip at Bloomingdale’s. Of course, becoming a Russian immigrant in New York City is a major culture shock. One of the best scenes in the film is when Vladimir goes shopping at an American supermarket for the first time. After a lifetime of standing in long line-ups for food, the idea of having the freedom to choose between different brands of coffee is just overwhelming.

If Moscow on the Hudson was a less ambitious movie, it might have been a feel-good story about an oppressed Russian escaping to the United States and climaxed with the defection. However, Vladimir’s defection actually takes place before the movie is half over and the story moves on to showcasing his struggles at adjusting to his new lifestyle. The defection is treated as a major media event and Vladimir is initially overwhelmed with happiness, but after the buzz dies down, he winds up facing the same problems that many immigrants face in America. Vladimir is unable to find employment as a musician and is forced to work a lot of menial, low-paying jobs in order to make ends meet. He becomes romantically involved with Lucia (Maria Conchita Alonso), an Italian immigrant working at Bloomingdale’s, but their relationship has its struggles since Lucia has always fantasized about marrying an American man. Vladimir befriends and shacks up with a black Bloomingdale’s security guard named Lionel (Cleavant Derricks), who lives in a small apartment with several family members, a situation which resembles Vladimir’s in the Soviet Union. Some unique parallels are drawn between Vladimir and Lionel, who felt that he had to flee to New York after facing racial prejudice in his native Alabama. Vladimir is also hit with crushing guilt about leaving his family behind and the possibility of never seeing them again. He even becomes homesick and starts believing that America might not be much better than his former homeland.

It’s admirable that Moscow on the Hudson does not shy away from showcasing Vladimir’s struggles in America, though the movie does hit its dramatic peak during the defection sequence and loses a bit of momentum before it reaches the ending. However, the movie still works pretty well as a whole. The subject matter was of particular interest to Paul Mazursky, whose Russian-born grandfather immigrated to the United States during the early part of the 20th century. Mazursky wanted the portrayal of a Russian immigrant’s experience to be as authentic as possible and spent a year researching the subject in preparation. Interestingly enough, one of the actors in Moscow on the Hudson has a story which almost parallels Vladimir Ivanoff’s. Saveily Kramarov, who (ironically enough) plays the role of a KGB handler, was a hugely popular comedian-actor in the Soviet Union for many years until he made the surprising decision to immigrate to the United States. After that, Kramarov pretty much became persona non grata in his former country and while he never achieved the same professional success in the United States, he obviously found his newfound freedom to be worth it.

Of course, the main reason Moscow on the Hudson works so well is because of the phenomenal performance of Robin Williams, who spends nearly one half of his role speaking in Russian. In preparation, Williams spent an entire year learning how to speak the language and learning Soviet customs. He even went so far as to learn how to play the saxophone from scratch. Experts have always agreed that Williams speaks Russian so convincingly here that you’d think he really hailed from the Soviet Union. Whenever you see Vladimir Ivanoff onscreen, you only see him as “Vladimir Ivanoff”, not “Robin Williams speaking in a funny accent”. After the release of this film, more people became aware of Williams’ immense range as an actor and this helped pave the way for the memorable dramatic performances he would deliver over the years. Obviously, Moscow on the Hudson functions as a time capsule of America-Soviet relations during the Cold War era. Hell, even Soviet comedian Yakov Smirnoff pops up to mark the whole project as a pure 1980s period piece. But while the world is now a much different place, many of the themes in Moscow on the Hudson are still applicable today. This may not be one of Robin Williams’ more well-known films, but it demands rediscovery, if only to showcase what a truly one-of-a-kind talent he really was.