Posted on November 3, 2014 by curtisrunstedler 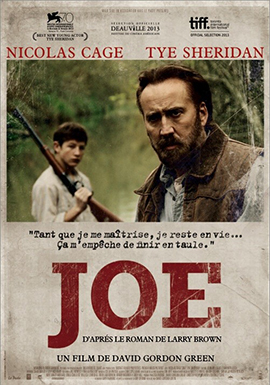 While I’ve enjoyed quite a few films that Nicolas Cage has been in (notably Face/Off, Leaving Las Vegas, Bringing out the Dead, Raising Arizona, The Rock, Red Rock West, Windtalkers, and Bad Lieutenant: Port Call to New Orleans), I tend to avoid films with him in it completely as of late because his execution is often over-the-top and obnoxious. David Gordon Green’s (George Washington, Pineapple Express) recent offering, however, brings out the best of his acting capabilities and through this opportunity comes arguably one of Cage’s best roles to date. He plays Joe, a kind-hearted yet turbulent and emotionally distant man who befriends a young boy named Gary (Tye Sheridan, Mud), who suffers abuse from his monstrous alcoholic father and torment from the local town loser. Cage gives us a performance that is emotional, passionate, and felt without being excessive. The rest of the cast does a fine job as well, particularly Sheridan, who struck a vein in Mud, and newcomer Gary Poulter as the father. Poulter nails the role, and in real life he was a homeless man who really wanted to act in a film. He caught Green’s eye and tried his best to sober up for the part and really delivered his role. Unfortunately, however, it was not meant to last, and he was found floating facedown in a lake shortly before the movie was released.

His character epitomises the monstrous, appearing initially as a humorous, incapable drunk who can barely stand, but then we see his monstrous aspects appear. His heinous acts include beating his son and taking his hard-earned money to buy booze and claiming he worked all day for it, pimping his daughter to local scum for booze, pretending to befriend another local drunk in order to beat his head in and steal his booze, and threatening to kill his son with a knife. The revelation of his monstrous self is gradual and continuous, and the shocking scene where he kills the other man for his booze is a moment of savage ferocity that embeds itself in your mind as a depraved act of human cruelty. It is a dark, harrowing film, and from the onset you know that things are going to be miserable and sad and violent before they get better. What redeems humanity in this film is the touching relationship between Gary and Joe, and this redemptive father-son relationship, though ultimately impossible, from teaching him how to drive to spending time with him and believing in the boy’s potential the virtues of both actors shone through. The film affirms to us the values of human connections despite the depravities and violence that perpetuate our existence. Joe finds solace in his conversations with Gary, and it takes his mind away from the losers who taunt him at the bar and the reality of harm being done to people who don’t deserve it.

Some viewers and critics compared the film to Mud (probably because Sheridan was in that one too). While it’s also set in the South, Mud is a much different film, a Tom Sawyer-esque journey where the boys tried to save Mud (Matthew McConaughey) instead of Joe trying to save the boy from his destructive environment. To me, Joe seems much darker and much more unforgiving, and it’s much closer to Winter’s Bone in terms of atmosphere and brutality. Joe is a hard yet rewarding watch, and it recognises the depths and diversity of Cage as an actor. While it does retain some of his trademark quirk, it’s a step in the right direction for Cage after a series of misfires, and it would be great to see more Cage films like this. Perhaps he deserves more credit than I give him.