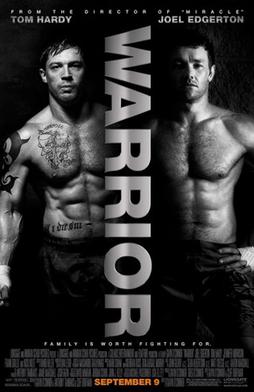 I can think of quite a few movies which I initially had very little interest in seeing, but wound up being swayed by an overwhelmingly fresh rating at Rotten Tomatoes. Let’s face it, while many trailers manage to make a film look better than it really is, there are other trailers which don’t do a film justice. In 2011, I remember seeing the trailer for Warrior, a movie about the world of mixed martial arts which didn’t exactly have me bursting with excitement to see it. Along with having the most generic title imaginable, the film looked like the most generic formula sports story imaginable and seemed to be littered with cliches. But after seeing that the movie scored an 83 % rating on Rotten Tomatoes, I became intrigued and decided to give it a shot at the cinema. Much to my surprise, Warrior wound up becoming my favourite movie of the year at that point. Now, to be fair, the reason the trailer with Warrior appeared to be littered with clichés was because the finished film IS littered with clichés. After I saw it, it was a hard sell convincing other people to see this movie because describing it only made it sound like a story which had been done hundreds of times before. A lot of people obviously felt that way because in spite of its great reviews and “Best Supporting Actor” Oscar nomination for Nick Nolte, Warrior was not a success at the box office. However, it’s a movie which does a phenomenal job at winning you over once you actually sit down to watch it.

Warrior opens in Philadelphia where a recovering alcoholic named Paddy Conlon (Nick Nolte) is surprised to find his estranged son, Tommy (Tom Hardy), waiting for him at his home. We learn that Paddy used to be such an abusive drunk during Tommy’s childhood that both and his mother decided to run away. After his mother died, Tommy joined the Marines and served overseas, but even though Paddy seems to be turning his life around, Tommy has little desire to make amends with his father. Tommy soon becomes a viral Youtube sensation after he joins a local gym and is filmed taking down a skilled mixed martial arts fighter in a matter of seconds. Tommy’s newfound Internet fame leads to him entering an MMA tournament called “Sparta” to win a $5 million prize and he begrudgingly asks his father to train him. Meanwhile, we also learn that Paddy had another son named Brendan (Joel Edgerton), who decided to stay behind in Philadelphia when Tommy and their mother ran away. Of course, Brendan was also subjected to abuse from his drunken father and is currently on bad terms with him. Brendan is married to his wife, Tess (Jennifer Morrison), and has two daughters, but is in danger of losing his house. He works as a schoolteacher, but is a former professional MMA fighter. Brendan decides to do amateur fighting on the side to make extra money, which leads to him being suspended from his job once the school board finds out. Out of desperation, Brendan decides to become a full-time fighter again, which will inevitably lead to him entering the Sparta tournament for the $5 million prize and crossing paths with his estranged father and brother again.

You can probably spot about a dozen different clichés in the preceding clip. The underdog hero who needs to win the big tournament to keep his family afloat and is given no chance in hell of winning. The estranged father who feels extreme pride for his son after his performance. The wife who is terrified that her husband is going to get hurt and anxiously waits by the phone because she is too scared to watch the fight. The stuffy former principal who seems disgusted by Brendan’s fighting career, but cannot resist the urge to starting rooting for him. As if this movie didn’t borrow enough from the Rocky films, Brendan will eventually be forced to go toe-to-toe with a large unstoppable Russian fighter named Koba (played by, ironically enough, by American Olympic gold medalist wrestler and WWE superstar Kurt Angle). And no points for guessing that the two brothers will be forced to face each in the tournament final. But the amazing thing is that this all WORKS! The director of Warrior is Gavin O’Connor, whose previous credits included such forgettable efforts as Miracle and Pride and Glory, so it’s easy to see why one wouldn’t have high hopes for this movie. Yet Warrior is a prime example of a genre movie which transcends its clichés through the conviction of the filmmakers and the actors and winds up becoming a very potent drama. This is a sports movie which is less concerned about athletics and cares more about its characters and their relationships. As the film goes along, you find yourself surprised by how invested you are in these people. By the time the story reaches the point where Tommy and Paddy have their big blow-up together, the end result is heartwrenching and Nick Nolte earns his Oscar nomination with one of the finest acted scenes of recent memory.

While the entire cast of Warrior does a fine job, Tom Hardy and Nick Nolte are the standouts. While Brendan is an underdog hero who’s easy to root for, Tommy and Paddy are far more complex characters. Hardy has become the most interesting actors of this generation and he does a phenomenal job at portraying a character who is shrouded in secrecy and is obviously dealing with a lot of inner turmoil which he desperately needs to unleash during his fights. Nolte toes a fine line between making Paddy a sympathetic character, but never letting us forget that he was a terrible father who caused great pain for his family. To its credit, the movie never cops out with a sugar-coated resolution to these relationships. It’s possible the reason Warrior did not garner a lot of buzz was because it came on the heels of David O. Russell’s Academy Award-winning film, The Fighter. Like Warrior, The Fighter used boxing as the backdrop to examine the strained relationship between two brothers and their family. However, as good as The Fighter was, I’d probably still rank Warrior above it because of the superior fighting scenes. The actual boxing matches were probably the least interesting element of The Fighter, but the testosterone-driven fights in Warrior are very exciting and energetic, and it’s hard not to be on the edge of your seat by the time the final confrontation between Brendan and Tommy takes place. While Warrior currently has a place on the Internet Movie Database’s “Top 250” list and is beloved by those who have actually seen it, it still remains one of the most underrated films of the past several years. It might be tough motivating people to watch Warrior, but once you do, you won’t regret it.