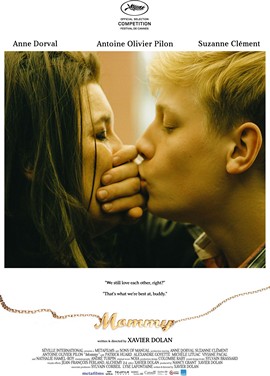 Xavier Dolan’s (Laurence Anyways) fifth film Mommy is a brilliant French-Canadian film from one of the scene’s most promising new talents. It’s about a single mother whose violent and emotionally unstable son returns to live with her, and the life that she tries so hard to build for herself.

It seems like a simple story, but it’s told so well, from the chemistry between lead actors Anne Dorval and Antoine Olivier Pilon (playing the mother and son, respectfully) to the visual feast and symbolism. Diane’s life is on the mend when Steve comes to live with her. He’s hyperactive, loud, and disruptive, bringing chaos to Diane’s attempted order. Beneath his obnoxious persona, however, he harbours a deep affection and respect for his mother, yet the communication of language fails him. It fails them both – she cannot be the mother that he wants her to be (potentially Oedipal implications here), and while she loves him, she can’t live with her son. Towards the end, she feels the weight of his turbulence, charged with lawsuits and finding no success in love, and realises what she must do. Their emotional connection is perhaps best represented in the non-diegetic use of Oasis’s “Wonderwall” (perhaps the best use of music in a film, which is saying a lot). Diane has unlikely support from her neighbour, played by Suzanne Clement (who was wonderful in Laurence Anyways, which was about a transgender man who begins to transform into a woman, and the impact on the relationship with his/her girlfriend). It’s deeply sentimental without being excessive. All of the scenes are so aesthetically pleasing and suggestive (reminds me of George Miller’s idea of visual storytelling). Indeed, the film benefits from its imagery and what isn’t said, but I think the French language is a perfect medium here, expressing frustration and inability for things to change for better at times. Dolan is building quite a reputation for himself, and it will be exciting to see what he does next. Beautiful, touching, challenging, romantic, and heartbreaking, this is cinema at its finest.

This entry was posted in Movies, Reviews, Runstedler's DVD Pick of the Month and tagged Franco-Canadien, mother-son, relationships, visual. Bookmark the permalink.