Consistently, Shout Factory and their subsidiary, Scream Factory, have exhumed misbegotten gems from the horror catacombs and redesigned them for genre geeks. Their DVD/Blu-ray’s are chockful of retrospective interviews, special features, commentaries and beautifully macabre, Mondo-esque box artwork. They’ve been praised as the Criterion of the blasphemous. I want to hopefully begin a stream of periodicals about their output and whether the film in question is worth the investment. 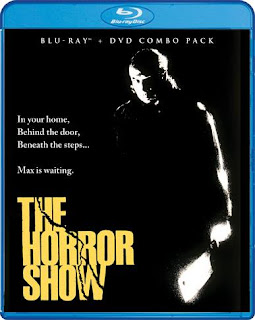 The Horror Show was conceived as a capitalization of the Nightmare on Elm Street franchise from Friday the 13th producer Sean S. Cunningham, but for international box office, it was converted into the third entry of the House franchise. From the get-go, James Isaac’s directorial debut plagiarizes directly from Wes Craven with the boiler room nightmares and the cackling villain, Max Jenke (Brion James).

Despite the inert beginning (which illogically contains flashbacks within dreams), expectations shouldn’t be dashed because the protagonist is the gaunt, craggly-faced journeyman Lance Henriksen. It’s a copacetic cast-against-type role for Henriksen and he is reliably stalwart despite the film’s propensity for the numbing slasher convention of jump scares surrounding the household cat and the officious boyfriend of Henriksen’s daughter.

While the movie meanders around the volatile cat-and-mouse symbiosis between James and Henriksen, they don’t spend much time together before James is sentenced to the electric chair. Furthermore, James doesn’t spout any memorable catchphrases and while his body count has accrued to over 110, the movie was so neutered by the MPAA, we only witness the mangled, dismembered aftermath of his heinous crimes. On a distracting side note, he strangely shrieks like an adenoidal Sylvester Stallone.

The notion of a recently executed serial killer becoming an ethereal spirit was definitely making the rounds in Hollywood around that era. From the guilty pleasure Shocker to the unpalatable The First Power, the novelty has vanished and The Horror Show squanders the opportunity with two powerhouse actors in the main roles.

While I can’t quibble too heavily about Dedee Pfeiffer in states of undress, her character is an underdeveloped sexpot. Henriksen’s son is a weasally con artist who bamboozles Nesquik for free products which doesn’t suffice for sympathy when Jenke’s apparition is jeopardizing his safety.

More than anything, The Horror Show is frustratingly stillborn and unintentionally risible (ex. The comical Blake Edwards misunderstanding of Dedee eavesdropping on Henriksen scolding his furnace and believing he is verbally abusing her intruder boyfriend) because it could’ve been a decadently sleazy blast with two leading juggernauts. Instead it’s an unconscionably lumbering buildup of search parties followed by false jolts.