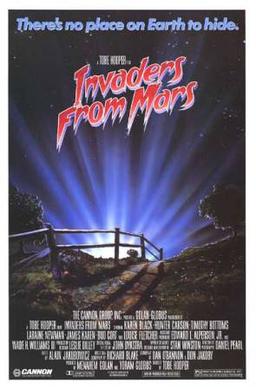 When Tobe Hooper signed an exclusive three-picture contract with the shlockmeister Cannon Films company, I’m certain they didn’t envision one of his flagships being a poker-faced, intentionally homespun remake of Invaders from Mars. In his infinite carte blanche, Hooper conjures the retro 50’s vibe of H.G. Wells with the soaring sub-Superman font of the credits.

Hunter Carson is earnestly untrained as David Gardner, the floppy-haired protagonist, but the seams of prepubescent awkwardness occasionally peek through (ex. His contorted disgust to his inculcated father’s guzzling ingestion of hot coffee). After her Oscar victory from One Flew Over the Cuckoo’s Nest, Louise Fletcher’s other memorably grinding-teeth role might be as David’s martinet teacher who clearly relishes her anti-maternal menace when she derides David as a “silly boy”.

Perhaps the marketing was false advertising and the behind-the-scenes pedigree was too illustrious (Hooper, Alien screenwriters Dan O’Bannon and Don Jakoby and special effects wizard Stan Winston) because ‘Invaders from Mars’  is not a banshee-shrieking horror movie. It’s concisely a family-friendly Body Snatchers from the paranoid point-of-view of a preteen and on that basis, it’s a sturdily old-fashioned romp where the danger is minimal. In a pleasantly galvanizing reversal, the nurse (Karen Black) is easily cajoled by David’s extraterrestrial allegations and their chemistry is the focal point for the remainder of the film which isn’t ludicrous considering Black is Carson’s biological son.

Like the amusement-park tunnel system in Texas Chainsaw Massacre Part 2, the mothership set is a rococo, icky monstrosity with the sleek, joint-like construction of a H.R. Giger charcoal drawing. Despite the overwhelming temptation for postmodern irony, Hooper never condescends to the adult skepticism and General Wilson (James Karen) is a squinting, cigar-chomping tonic in the latter half (“Marines have no qualms about killing Martians”). Christopher Young’s gung-ho march for the military is uncannily similar to Rambo: First Blood Part II. Some might excoriate the last shot as a dreamscape cliffhanger but Carson’s paroxysmal reaction vividly illustrates the terror of what he is witnessing off-screen.