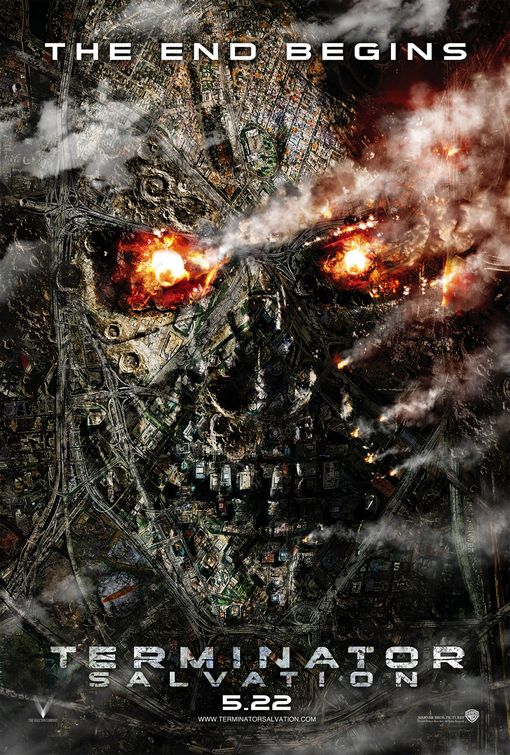 Let’s face facts. Terminator is a franchise that can thrive without the presence and mystique of Arnold Schwarzenegger. He is the lifeblood. Even if Terminator: Genisys is a fiasco, at least the Austrian Oak is in it once again and he is terra firma of all these films. Terminator: Salvation and The Sarah Connor Chronicles FOX television show erroneously believed that Schwarzenegger is just an optional accessory and not the main attraction. McG and showrunner Josh Friedman were tragically mistaken.

There is a plethora of flaws within this lukewarm chapter. First, Danny Elfman’s bastardization of Brad Fiedel’s iconic score. “So that’s what death tastes like” is a particularly garish expression for death row inmate, Marcus Wright (Sam Worthington) and the dialogue only worsens. Marcus’ crime is left deliberately vague or it could be a victim of poor editing such as Kate’s pregnancy and Common’s nearly mute role. The kamikaze siege on Skynet’s R & D division is the only worthwhile element in the entire film. The single-take shot of Connor’s aircraft attempting a coup is impressively feigned from liftoff to crash landing. For a moment, we are harkened back to Cameron’s nerve-shredding vision of a harrowing future and the acid-washed, desaturated tone (along with Linda Hamilton’s audio logs) reinforces that.

Then we are immediately catapulted back into the torpid histrionics of a barking Christian Bale and the flavorless Worthington. Connor literally nosedives into a maelstrom and is somehow not engulfed by the Mach-5 waves. Instead of an elaborate stratagem to subjugate Skynet, the central command’s deus ex machine is a deactivating signal transmission. It reeks of oversimplified screenwriting. “Come with me if you want to live” shouldn’t elicit shudders of manipulative fan service but Anton Yelchin’s utterance of this canonized line is insulting. Furthermore, this is the only Terminator with no time-travel which feels counterintuitive to the lore. All of the characters are ciphers without dimension including the cloying Rudy-from-the-Cosby-Show sidekick.

The Terminator films have never postulated turgid questions about the ghost in the machine which is another major area where Terminator: Salvation goes awry. They’re fundamentally about our capacity for mutual self-destruction. Cameron stated in Terminator 2 that if an automaton “can understand the value of human life maybe we can too.” Marcus is a straw-man and the viewers don’t care if he is a cyborg with sentient emotions.

Ultimately, Terminator: Salvation is inconsequential because it accomplishes no goals. Kyle Reese isn’t eviscerated when it be greatly beneficial to the artificial intelligence’s cause when he is imprisoned inside their headquarters. John Connor is still the predestined leader of the resistance. The war hasn’t been averted or halted. It’s a lobotomized exercise in plundering the wealth of potential in Cameron’s blueprints.