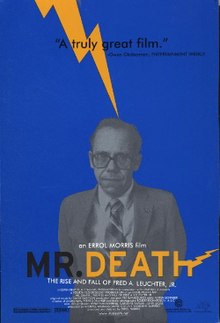 Few documentary filmmakers have had a more interesting career than Errol Morris. In 1978, Morris directed Gates of Heaven, a documentary about pet cemeteries. It was such an offbeat subject for a documentary that legendary director Werner Herzog stated that he would eat a shoe if the film was actually completed and released. Gates of Heaven did get completed, but seemed destined to remain in obscurity until it received a glowing endorsement from Roger Ebert, who went so far as to rank it as one of the ten best films he’d ever seen. And, yes, in case you’re wondering, Werner Herzog did keep his word and ate an entire shoe in front of a live audience. Ever since then, Morris has built up a solid resume of acclaimed documentaries. Some of his most notable films include The Thin Blue Line, which played a huge role in getting an innocent convicted murderer off of death row, and the Academy Award-winning The Fog of War, which provided former Secretary of State Robert McNamara with an outlet to share his experiences with some of America’s biggest wars. In 1999, Morris once again showcased his knack for making documentaries about offbeat subject matter when he released Mr. Death: The Rise and Fall of Fred A. Leuchter, Jr.. The subject of this film is a man whose trade was overseeing executions and attempting to make them as painless as possible. Fred A. Leuchter, Jr. is a pretty odd individual, to say the least, but you start off the film with a strange admiration for how good he seems to be at his work… until he makes a colossal error in judgment which ruins his life!

Like many Errol Morris documentaries, Mr. Death devotes a great deal of time to simply allowing its subject to sit in front of the camera and share his story. We learn that Fred A. Leuchter, Jr. had aspirations of becoming an engineer, but since his father was a corrections officer and he spent much of his early life around prisons, he develops a strange fascination with executions. At some point, Leuchter became concerned that American prisons were using electric chairs which he believed to be unsafe and caused their subjects to undergo a needless amount of protracted suffering before their death. Leuchter states that he even though he is a proponent of capital punishment, he does not believe in “capital torture”. This ultimately led to him designing and manufacturing a new form of electric chair which made for safer, more efficient executions and allowed the prisoner to experience a more “humane” death. This idea proved so successful that prisons all over America started consulting with Leuchter and he was able to establish an entire business based around his ability to provide the most efficient devices for execution, whether the method of death was the electric chair, the gas chamber or lethal injection. Even though Leuchter never received any formal training for what he did, he was working such a niche field that he essentially became the go-to guy for ensuring that capital punishment always went as smoothly as possible.

The first half of Mr. Death is mostly interview footage of Leuchter describing the logistics of his unique occupation. It makes for fascinating viewing, but Leuchter’s story takes a very unexpected turn when he is approached by a neo-Nazi named Ernst Zundel. During the 1980s, Zundel published literature in which he claimed that the Holocaust never actually happened. His writings proved so controversial that the Canada government decided to utilize an obscure criminal statute to charge him with spreading false information. For his defense, Zundel hired Leuchter to travel to Auschwitz and perform a scientific analysis on the former site of one of their concentration camps. Since Leuchter was considered to be one of the world’s foremost experts on gas chambers, Zundel hoped that he could disprove the widely held belief that the camps housed gas chambers which were used for the mass execution of Jewish prisoners. If Leuchter determined that there never were any gas chambers at Auschwitz, this would somehow bolster the credibility of Zundel’s beliefs that the Holocaust never happened. Well, believe it or not, Leuchter actually DOES make this determination! His analysis leads to him publishing the “Leuchter Report” in which he concludes that there couldn’t have been any gas chambers at Auschwitz. Of course, it turns out that the methods of scientific testing Leuchter used to arrive at this conclusion were seriously flawed.

As you can imagine, once Leuchter starts expresses his beliefs that the Holocaust never happened, his personal and professional lives are ruined. His credibility is shattered so badly that no prison will consult with him or utilize his services anymore. The most complex aspect of Mr. Death is trying to figure out Leuchter’s ultimate motivations. Say what you will about conspiracy theorists, but I think most people will agree that Holocaust deniers are pretty much the lowest of the low in that department. Since no rational person could possibly conclude the Holocaust never happened, why did Leuchter choose to go down that path? Leuchter’s critics are quick to call him an anti-Semite and a hate monger, but the ultimate impression you get from him is that he was hopelessly naïve. He doesn’t appear to have any sort of agenda when he travels to Auschwitz. When Leuchter provides his reasoning for why the camps couldn’t have housed gas chambers, he does not come off like a crazy or hateful person. He’s simply a man who came to a controversial conclusion based on his own scientific findings, but the main problem is that Leuchter wasn’t as much of an expert as he thought he was. Of course, you’d think that the immense backlash received by the Leuchter Report might have prompted him to reverse his position or apologize for his mistakes, but Mr. Death was filmed nearly a decade after this backlash took place and it’s clear from his interviews that Leuchter has still not wavered from his original conclusion. In addition to losing his professional credibility, the controversy brings an end to Leuchter’s marriage, which is somewhat understandable once you learn that he decided to use the Auschwitz trip as their HONEYMOON!

Incidentally, the original title for Mr. Death was going to be Honeymoon in Auschwitz, but that idea was shot down by the distributor. The story goes that Errol Morris screened his original cut of Mr. Death for a film class at Harvard, but the unexpected reaction prompted to extensively re-edit the film. Apparently, half the class found Leuchter’s conclusions about Auschwitz to be so persuasive that they agreed with him while the other half came away with the impression that Mr. Death was an offensive piece of Holocaust denial propaganda. Of course, neither of these reactions were what Morris intended, so he was forced to insert extra material into the film of other people disagreeing with the Leuchter Report in order to drive home the seemingly obvious point that Holocaust denial is 100 % wrong and that no one should take Leuchter’s conclusions seriously at all. However, the class’ original reaction serves as a perfect demonstration of how much Leuchter genuinely believed his findings and how easy it is for a misguided person to be swayed by an unpopular opinion. One of the biggest strengths of Mr. Death is that allows you to feel many different things about a very complex individual. You might start off the film by laughing at the highly eccentric Fred Leuchter and then find yourself developing a surprising admiration for the guy. But it isn’t long before you start feeling anger and disbelief at his actions before you ultimately feel pity for him. In the end, Mr. Death is a truly fascinating and unique character study and remains of the more underrated documentaries in Errol Morris’ filmography.