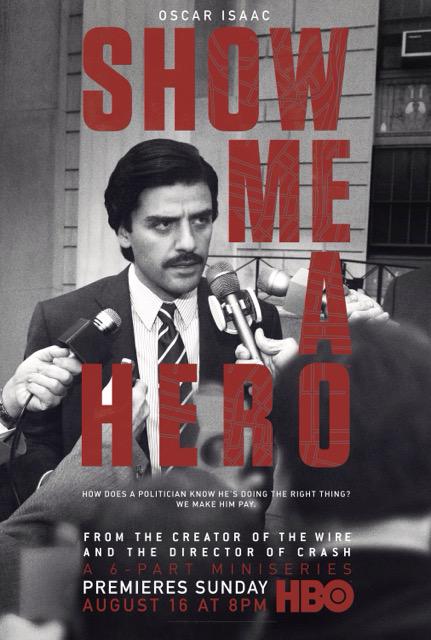 From April to late August, HBO has been ensured a monopoly for my attention span. Game of Thrones was mandatory, ritualistic viewing but the letdown of True Detective Season 2 continues to sting. I should be pondering why this premium channel is still cajoling me back on Sundays month after month. However, with the pedigree of The Wire’s David Simon, director Paul Haggis and actor Oscar Isaacs, how could I pass up the six-hour miniseries Show Me A Hero?

Painstakingly nuanced and rich with procedural shop talk, The Wire enraptured the audience with a sweeping panorama of Baltimore’s drug trade from the bottom-feeder addicts to the mayoral office. A beeper is our preliminary signal that we’ve traveled back to the 80’s epoch and a digital distress message of 911 indicates that New York council member Nick Wasicsko (Oscar Isaacs) is in the eye of a typhoon.

Bruce Springsteen’s music smacks of blue-collar nostalgia and his bootstrap philanthropy is a lyrical companion piece to the low-income struggle (ex. The “Hungry Heart” montage). Two temps gossiping about the main players in district caucus is a masterful tool for introductions to Yonkers politics where left-wing and right-wing are not factors.

I wasn’t enthusiastic about Isaacs after the misogynistic mess that was Sucker Punch, but he is maturing with each role and I believe he was snubbed for A Most Violent Year. Unlike that obdurate businessman, Nick is a bit willowy and sophomoric with his 28 years of age making him an unorthodox candidate for the electoral race. The housing zoning debate is an uproar of dissent and smooth-talkers. My favorite scene is when Nick skittishly sits in silence as the other representatives breath vehement brimstone for their opposition. It’s a filibustering cacophony which resembles most sessions of Parliament where whoever is loudest is deemed the most righteous.

One salient point broached by Michael H. Sussman (Jon Bernthal) is that the NAACP should be more steadfast for the integration of a few hundred housing units but a president says that he isn’t “giving up, [he’s] just tired” from the perpetual squabble. It was a war of attrition and the African-American contingent were beginning to surrender from exhaustion.

Some might rankle that Show Me a Hero is almost too tangible and vérité but those are precisely the assets that it will be beloved for. The street beat of a grassroots campaign would be neglected by other masterminds but David Simon and journalist William F. Zorzi peruse the process for every John Q. Public-pandering fiber. It’s an inspirational sight when Nick sees blocks of hand-made endorsements strewn along the lawns of constituents in Angelo’s district.

The fact that Isaacs is excellent is not a staggering revelation but Jim Belushi channels his working-class appeal entirely into the laissez-faire braggadocio of Angelo Martinelli, the incumbent, six-term mayor. He is the undisputed favorite in the upcoming ballot-casting and it can be ascribed to his gregarious nature (his wink at Nick amidst a meeting could be construed as a backhanded insult or friendly gesture of media rivalry).

The show is bifurcated into two parts for each of its three nights. Episode 2 is already at an electrifying crossroads with the ordinance vote resulting in the city of Yonkers being fined for each week they don’t submit to the judge’s (Bob Balaban) decision. They could be bankrupt within a minuscule frame of time which adds a race-against-the-clock desperation to the proceedings. The controversial complexity is that Balaban is coercing Nick to enact a moral proviso that is beyond reproach. It also punctuates the NIMBY (Not In My Back Yard) movement and the inheritance of doom upon being sworn into office.

If the show has a mild spot for improvement, it’s the skid-row scenes in the projects prospects where the disenfranchised must repatriate back to their native land, retire due to diabetes-precipitated blindness or be currency mules during exchanges. It should’ve tautened the focus or added more breadth to these characters because it feels like a rogues-gallery rerun of The Wire.

The same people who were fierce supporters of Nick were also the most rabid detractors of his housing initiative. Show Me A Hero is a stupendously sociological, immaculate dramatization of the executive branch and how the stressful resistance and burden of responsibility can cause ulcers from our leaders (Nick is continuously swigging Maalox for the heartburn of leadership).

This entry was posted in Reviews, TV and tagged david simon, HBO, oscar isaacs, paul haggis, show me a hero, the wire. Bookmark the permalink.