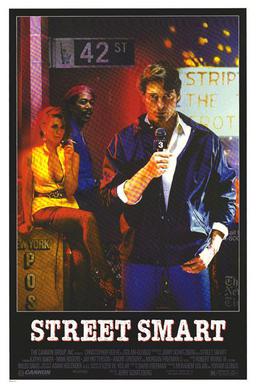 It’s always fun to study the filmography of an iconic actor and discover that the role which originally put them on the map is a complete 180 from the roles they normally play. Case in point: in the long and storied career of Morgan Freeman, would you believe that the breakout role which garnered him his first Academy Award nomination was playing a psychotic pimp nicknamed “Fast Black”?! Not only, but Freeman has cited it as the personal favourite of all his Oscar-nominated performances. Freeman first entered the spotlight during when he became a performer on the PBS children’s show, The Electric Company. However, since he had much higher aspirations for his acting career, Freeman eventually became disillusioned with playing the same children’s characters over and over again and it even sent him on a downward spiral into alcoholism. When The Electric Company was cancelled, Freeman transitioned into film, but success eluded him and he was forced to take a recurring role on the soap opera, Another World. It was not until Freeman was cast in a 1987 thriller called Street Smart that he finally garnered mainstream recognition and soon became one of Hollywood’s most respected actors. Street Smart is a solid enough thriller on its own merits, but it might have been completely forgettable without Freeman’s acclaimed performance, which elevates the material. In fact, the actor’s post-Street Smart career only makes the film extra-fascinating to watch today since it’s rare to see Morgan Freeman come across so scary.

The lead protagonist in Street Smart is Jonathan Fisher (Christopher Reeve), a writer for a prominent New York City magazine. Knowing that there’s an opportunity for a potential cover story, Jonathan tells his boss that he is acquainted with a Times Square pimp and suggests the idea of conducting an interview and writing an article about the pimp’s life. The higher-ups love the idea, but the problem is that Jonathan does not actually know any pimps and has zero luck convincing a real-life pimp to talk to him. Facing a tight deadline, the desperate Jonathan decides to fabricate an entire article about a completely fictitious Times Square pimp named “Tyrone”. The story is published and becomes a huge hit, boosting Jonathan’s career and allowing him to become a TV reporter. It seems that Jonathan is going to get away with his ruse, but by unfortunate coincidence, a prominent Times Square Pimp named Leonard Smalls, a.k.a. “Fast Black” (Morgan Freeman) is currently facing an indictment for murder. When the prosecuting attorney reads Jonathan’s article, he becomes convinced that “Tyrone” is Fast Black. He demands that Jonathan turn over all his notes from the story since they could contain potentially incriminating information about Fast. The problem, of course, is that these “notes” don’t actually exist, so Jonathan and Fast Black are soon forced to cross paths and turn their fabricated relationship into a real one. The most interesting aspect of Street Smart is the interplay between Jonathan, who has provided the public with a romanticized view of pimps, and Fast, who demonstrates just how manipulative and frightening pimps can be.

The situation is further complicated by the presence of Fast’s top prostitute, Punchy (Kathy Baker), who becomes involved with Jonathan in spite of the fact that he already has a girlfriend. Fast intends to use Jonathan to fabricate an alibi which will help him beat his murder rap. If Jonathan manufactures some “notes” which state that he and Fast were meeting together at another location while the murder took place, the case against Fast will fall apart. Street Smart was a personal pet project for Christopher Reeve, who shopped the idea around unsuccessfully until it was picked up by the Cannon Group. Of course, the Cannon Group were usually not known for producing high-quality cinema and since they had recently acquired the rights to the Superman franchise, they only agreed to finance Street Smart if Reeve agreed to star in Superman IV: The Quest for Peace. Of course, Superman IV turned out to be a complete disaster which spelled the end to Reeve’s run as the Man of Steel. In Street Smart, it’s an amusing to see Reeve play an unethical reporter who is essentially an anti-Clark Kent and the actor has such an inherently likable presence that he manages to make Jonathan more sympathetic than he probably deserves. That said, Reeve is a bit bland and wooden in the role, and wholly unconvincing during the scenes where he’s speaking in front of a news camera as a field reporter. But thankfully, Reeve’s shortcomings are offset by the very strong performances of Morgan Freeman and Kathy Baker. The film’s high point is probably this brutally intense and terrifying scene where Fast threatens Punchy with a pair of scissors and threatens to cut out her eyes.

As someone who didn’t see Street Smart until long after Morgan Freeman was famous, I was taken aback to see him acting so viciously. But even though Street Smart didn’t do well at the box office and it wasn’t very common to see anything produced by the Cannon Group get Academy Award recognition, Freeman delivers such a commanding performance that you can see why he garnered an Oscar nomination. In some scenes, Fast Black comes off as very charismatic, charming and likable, but of course, that’s how pimps have to act in order to convince young girls to work for them. Once a pimp has someone under their spell, the more dangerous side of them emerges. It’s fascinating to see Fast essentially perform this same routine on Jonathan. Fast manipulates the reporter so much that the pimp even gets invited to a fancy party at one point and manages to charm elite members of New York’s upper class. But Fast does not shy away from demonstrating just how dangerous he really is and Jonathan soon realizes that this psychopath truly has him by the balls. Street Smart has a lot of interesting points to make about the sensationalism of the media, but its overall story is pretty unbelievable and filled with implausibilities. The contrived ending is also quite silly and certainly not a conclusion worthy of such a strong villain as Fast Black. However, Freeman is so convincing that the viewer is able to suspend their disbelief about the premise and buy into it. Street Smart is pretty much forgotten about nearly 30 years later, but it’s still notable for launching Morgan Freeman’s career and is definitely worth a look, if only to see the actor in a much different light.