Posted on September 14, 2015 by castordurden 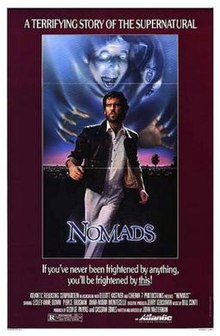 This extremely risible, effete and addlepated film was basically an audition for John McTiernan. A demo reel if you will for his next gig which was the massively popularized Predator. Arnold Schwarzenegger screened this and envisioned him as the perfect candidate for his extraterrestrial action flick. What did he see?

He certainly has a cinematic eye with blue blips on the nocturnal Los Angeles skyline. Shackled in handcuffs while babbling French nonsense, Pierce Brosnan is eye-rollingly cheesy in his shellshocked hysteria and broadly nasal Inspector Clouseau accent. His escape from captivity is incompetently drenched in a slow-motion frame rate (which is the padding for most scenes) as he whispers into Dr. Eileen Flax’s (Leslie-Anne Down with Virginia Madsen’s poutiness) ear and dopey staging for a jump scare. From that point onward, Flax rhapsodizes about flashbacks to sociologist Jean-Charles Pommier’s (Brosnan) existence before his untimely departure.

The most laughably mundane is a possessed Flax reciting verbatim Pommier’s conversation with a real-estate agent. It’s also not a flattering portrait for hospitals. The physicians and nurses act awfully cavalier about the “lunatic” Pommier’s extemporaneous death (and the staff is somehow fluent in French). To his disadvantage, McTiernan also wedges a malapropos rock-n’-roll guitar stingers and a heartbeat during the “suspense” in what should otherwise be a classy, supernatural affair.

If this were a kamikaze satire on yuppie-in-danger movies, it would be a riot. But sadly, McTiernan is the Claudio Fragasso who devoutly believes that leather-clad biker gangs in a blackout van are the sources for helter-skelter in the audience’s nervous system.

An interlude with a kindly nun doesn’t decipher the cryptic, impenetrable storyline any further. While Pommier is photographing them, it degenerates into a Motley Crue music video. Seems Schwarzenegger took a monumental leap-of-faith on McTiernan because, based on this wafer-thin affidavit, he wasn’t ready for the next phase.