Posted on October 2, 2015 by castordurden The band Babel’s droning punk-rock song is recycled over and over. Reb Brown blares like an air raid while decimating skinwalkers with bullets that are not explicitly silver. Apparently editor Charles Bornstein had finally learned triangle wipes and other hokey transitions in his pre-Final Cut software because he flaunts every variation for the choppy segues.

Perhaps, Philippe Mora surreptitiously collaborated with Robert Sarno and Gary Brandner on a deadpan satire of the werewolf craze. How else to explain the rhetorical “The Following Afternoon” title card or the lycanthrope ménage a trios scene? If so, it is utterly brilliant in its sincerity. If it’s a foray into New Wave eroticism as Mora has proposed, it’s an unmitigated failure. Sybil Danning is deliciously nubile in (and out of) leather bondage outfits but draping her in wooly hair all over her genitals is a mammoth faux pas. 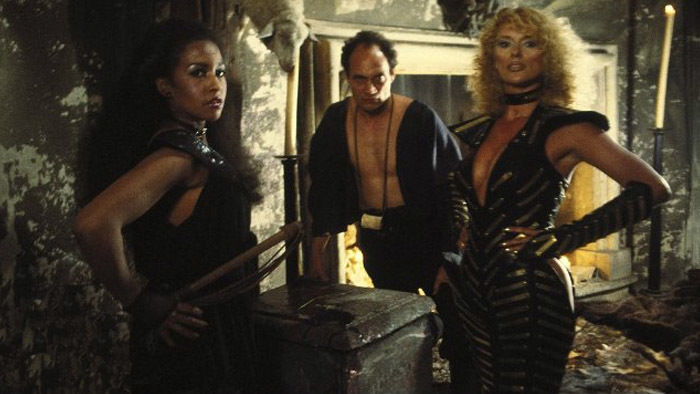 Most people cherish werewolf films for their transformation scenes where their limbs contort, their snouts extend and their hair bristles but, in Howling II, they are predominantly off-screen. Christopher Lee might be catatonic in the film because he is completely emotionless and unfazed by scenes of nonchalantly spiking a werewolf playing possum in a roadside accident.

Lee’s tussle with Danning should be equivalent to his lightsaber duel with Yoda. Instead it’s a mess of light-emitting orifices and dispassionate embraces. Not the most glamorous exit for the queen of the werewolves. A reanimated bat basically having sexual intercourse with a priest’s throat is a tawdry prosthetic which only increases the grossness factor.