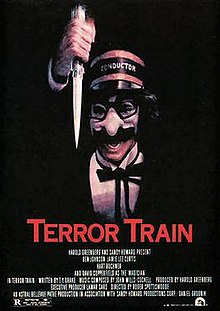 Every year around Halloween, you’ll probably come across dozens of lists on the Internet about famous Hollywood actors who started out their careers by acting in horror films. Sometimes, said actors are lucky enough to appear in some of the most iconic horror films of all time, such as Johnny Depp in A Nightmare on Elm Street or Kevin Bacon in Friday the 13th. Of course, the ultimate example of this is probably Jamie Lee Curtis, who made her feature-film debut by playing the heroine in John Carpenter’s seminal slasher film, Halloween. Over the next few years, Curtis would become known as the quintessential “scream queen”, starring in such horror films as John Carpenter’s The Fog, Prom Night, and, of course, an inevitable sequel, Halloween II. Curtis’ naturally likable screen presence made her an ideal horror movie heroine, but on most occasions, actors are so closely associated with the genre wind up being trapped there. However, even though the slasher film reached the peak of its success during the 1980s, Curtis was able to move away from the genre before its popularity waned and successfully transitioned into a mainstream Hollywood star. Even though the films have varying degrees of quality, Halloween, The Fog and Prom Night are still considered staples of the genre (and have each spawned their own remake), but one Jamie Lee Curtis slasher flick which isn’t quite as well-known today is Terror Train. Filmed in 1980, Terror Train contains all the standard horror tropes and cliches, but it’s a lot better made than you would expect and even contains its fair share of clever and innovative ideas.

Like many slasher films, Terror Train opens with a flashback. During a New Year’s Eve party, a bunch of pre-med college students in a fraternity conspire to pull a mean-spirited prank on an awkward nerd named Kenny Hampson (Derek MacKinnion). After our heroine, Alana (Jamie Lee Curtis), lures Kenny to a room for a sexual encounter, he is shocked to find a female medical cadaver in his bed instead, causing him to go berserk. We cut to three years later and learn that Kenny was confined to a mental hospital because of the traumatic prank. Alana feels remorse over this, but the rest of her friends who orchestrated the prank do not, most especially their dicklish ringleader, Doc (Hart Bochner, best known for playing the equally dickish Ellis in Die Hard). Anyway, on this particular New Year’s Eve, the fraternity organizes a costume party which will be held aboard a moving train, which is operated by Carne the conductor (Ben Johnson). However, one of the fraternity members is murdered before the train leaves the station and the killer dons his costume before climbing aboard. The masked killer starts offing students on the train and makes sure to disable the radio, so that the victims will be unable to contact anyone when they are hundreds of miles away from help. As you probably guessed, the victims are the same students who were involved in Kenny Hampson’s fraternity prank and whenever they are murdered, the killer makes sure to don the victim’s costume, so they can move freely throughout the train.

It might seem pretty obvious that Kenny Hampson is the mystery killer and is seeking revenge for his traumatic experience, but the movie has a lot of fun defying expectations and you’re never quite sure what the final twist is going to be. The idea of having the killer don the costumes (one of which is the creepy-looking Groucho Marx mask seen on the poster) of his victims is actually a pretty clever one. Since the majority of the characters are dressed in weird costumes throughout the film, you can never be certain if the killer is present during many of the scenes. This is the rare slasher film where a character doesn’t even have to make the stupid mistake of wandering off alone to wind up in danger, and even the most mundane scenes have feelings of ominousness. The structure is somewhat reminiscent of the underrated Christopher Lee/Peter Cushing horror film, Horror Express, which used the idea of an alien force occupying passengers’ bodies to get around the limitations of setting a horror story within the confines of a train. Terror Train contains all the stock teenage characters you’d expect from the genre (the jerk, the horny boyfriend, the slut, the nerd, the black guy who dies early), but for the most part, the movie does a good job at handling their various death scenes and generating suspense. And then there’s the truly offbeat casting of David Copperfield in his only career acting role as a magician (what a stretch!) hired to perform on the train, who may or may not be the killer. Apparently, the original script did not even contain a magician character, but the producer Sandy Howard was a huge Copperfield fan and wanted to find a way to shoehorn him into the movie.

As stated earlier, Jamie Lee Curtis was always a very effective horror film heroine because of her naturally likable, sympathetic screen presence and her presence helps elevates Terror Train as well. Academy Award winner Ben Johnson also does some solid work in the obligatory “veteran-actor-cast-in-slasher-film-for-credibility-purposes” role from that time period. While Terror Train is a relatively low-budget Canadian production, its technical credits are better than average for the genre. This marked the directorial debut of Roger Spottiswoode, who started out as an editor on several Sam Peckinpah films and went on to direct several notable Hollywood productions, including Turner & Hooch, Tomorrow Never Dies and The 6th Day. And, believe it or not, Terror Train happened to be shot by Academy Award-winning cinematographer John Alcott, who is best known for his collaborations with Stanley Kubrick and photographed this run-of-the-mill slasher film the exact same year he did The Shining! Even though this type of production was probably beneath Alcott at this point, Terror Train is very well-shot and Alcott does a great job at capturing the claustrophobia of the train setting. While the plot itself is fairly standard, I must admit that the big twist at the end genuinely fooled me. The final scene is pretty silly, but the revelation about the killer’s true identity did manage to take me by surprise. Overall, that’s only one of the reasons why I consider Terror Train to be an underrated and much better-than-average horror film. It’s not one of the most famous slasher flicks from that time period, but it contains enough technical flourishes, offbeat touches, and clever surprises to stand out from the pack.