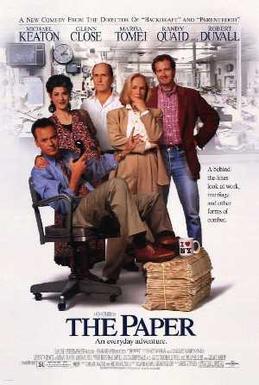 The acclaimed newspaper drama, Spotlight, is currently playing in theatres and is a favourite to get a ton of Academy Award recognition this year. The film covers the true story of a group of investigative journalists for the Boston Globe, who uncovered evidence of rampant sexual abuse by Catholic priests, which subsequently covered by the church. The Globe eventually blew the lid off this scandal with a story which earned them a Pulitzer Prize in 2003. Michael Keaton plays the role of reporter Walter “Robby” Robinson and while watching Spotlight, I couldn’t help but flash back to 20 years ago when Keaton played another investigative journalist in a film called The Paper. Spotlight functions as a love letter to responsible investigative journalism by reporters who care more about getting the truth rather than garnering an easy scoop, but the movie presents its story in a very straightforward, no-frills fashion. The Paper has the exact same ideals, but instead chooses to present its story in the style of an old-fashioned screwball comedy. But even though Spotlight and The Paper are drastically different in style and tone, most people who’ve worked in the field of journalism would rank them both amongst the most authentic newspaper moves ever made. Even though it sports a first-rate cast and was directed by Ron Howard, The Paper is almost completely forgotten about today, but it deserves revisiting.

The Paper takes place during one 24-hour timeframe in New York City. It opens in Brooklyn with a pair of young black men stumbling across a parked car containing the bullet-riddled bodies of two white businessmen. Due to immense political pressure to solve the case, it isn’t long before these youths are charged with the murders even though they are completely innocent. The main character is Henry Hackett (Michael Keaton), who works as an assistant managing editor for a tabloid newspaper called the New York Sun (none-too-subtly based on the New York Post). Henry’s wife, Martha (Marisa Tomei), is a Sun reporter on maternity leave who is expecting their first child any day now, and Henry also has a potential new job lined up at a far more prestigious newspaper called the New York Sentinel (none-too-subtly based on the New York Times). Compared to the Sentinel, the Sun seems like an absolute trainwreck, as it’s constantly dealing with financial troubles and inner turmoil. The managing editor, Alicia Clark (Glenn Close), is always having to make tough budget cutbacks and is not popular with the staff. The publisher, Bernie White (Robert Duvall), is a workaholic who is estranged from his family and is facing his own mortality after being diagnosed with prostate cancer. The top columnist, McDougal (Randy Quaid), is currently sleeping in the office because he’s in fear for his life after publishing a negative article about the city’s sanitation department. Of course, when the paper has to run a story about the murders and Henry suspects that the so-called “killers” might be innocent, more chaos ensues.

The Paper follows Henry’s attempts to uncover the truth about the murders before the next day’s edition goes to print. Henry is so focused on not smearing the reputation of two potentially innocent kids that he’s willing to risk his job, his future and his marriage in order to get the story right. The script for The Paper was co-written by David Koepp, an enormously successful Hollywood screenwriter who has worked on the likes of Jurassic Park, Spider-Man and Mission: Impossible, and his brother, Stephen Koepp, who worked as the senior editor at Time Magazine. The story is done in the style of a frenetic screwball comedy and is often reminiscent of the newspaper movies of the 1930s and 40s, particularly the iconic stage play, The Front Page (which was most famously adapted into the Cary Grant comedy, His Girl Friday). The collaboration between the Koepp brothers is a very unique one: Stephen’s real-world experience ensures that the details of the newspaper’s day-to-day world feel convincing and authentic, but David finds a way to turn these details up to eleven and mould them into an entertaining narrative. The overall story is not particularly believable and the presentation might seem over-the-top, but you have little doubt that the high-pressure world of tabloid journalism is just like this. The script is littered with wonderfully witty dialogue (“The doctor found nicotine in my urine” “Then get your dick out of my ashtray”) and Ron Howard keeps things moving at a breakneck pace without stopping to take a breath. Thankfully, he has a cast who can deliver this material with pitch-perfect timing.

Michael Keaton is the heart and soul of The Paper, portraying a character who often makes questionable decisions, but you like him all the same. Even though accepting the job with the Sentinel would mean more money and far less stress for him, you can tell that Henry thrives off the adrenaline of working in a chaotic environment and wouldn’t have it any other way. You also respect his obsessive need to get the story right, no matter what the personal cost. In spite of their reputation as a low-rent tabloid, the Sun does take pride in the fact that they have never knowingly run a false story. The Paper probably wraps up its plot a little too neatly and one could easily think that its idealistic viewpoint is a bit naive. In today’s age of Internet news, where the top priority is to break the story first, it might seem unbelievable to see characters employed by a tabloid acting so concerned about accuracy and integrity. You might also think The Paper pushes its screwball stylings too far and gets a little silly towards the end, especially when it climaxes with a fistfight between two characters in the press room, followed by a shooting in a bar. Yet in spite of its flaws, The Paper is still a very well-crafted, irresistible piece of work which serves as an effective love letter to investigative journalism. Since it is atypical of most the director’s work, it is one of the more forgotten titles in Ron Howard’s filmography, but it’s also one of his most purely entertaining.