Before They Were Stars: Mark Hamill in the Pilot for “Eight is Enough” 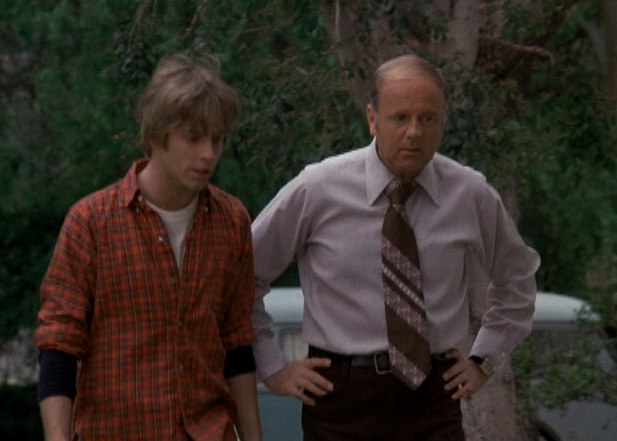 The preceding photo is a rare opportunity to see cast members from Star Wars and Spaceballs sharing the screen together! That still is from the original pilot episode of the popular sitcom, Eight is Enough, starring the future King Roland from Spaceballs, Dick Van Patten. And that young man standing next to him is none other than Mark Hamill, who was just on the cusp of being cast in Star Wars. It’s funny how things turned out: Hamill was cast as one of Dick Van Patten’s sons in the pilot episode of Eight is Enough, but made an unsuccessful attempt to get out of his contract and leave the show because he wanted to pursue a movie career. As fate would have it, Hamill wound up getting into a serious car accident which damaged his face, so they decided to re-cast his role with another actor, Grant Goodeve. Eight is Enough first hit the airwaves in March 1977, a mere two months before Star Wars came out, and lasted on the air for five seasons. So if not for that fateful accident, Hamill might have been trapped on that sitcom for years and missed out being Luke Skywalker. Anyway, there doesn’t seem to be any footage of Hamill from the Eight is Enough pilot episode on Youtube, but you can still see his name here in the original opening credits sequence.