With a title card like Home Again, fans can be forgiven for believing that this episode is a direct descendant of the iconic Season 4. Alas, there are no inbred brethren around for Mulder and Scully to play around with. But we wouldn’t be asinine to assume that there would be C.H.U.D.’s roaming around in the sewer during the urban rehousing project. As a treatise for the official’s disdain towards the homeless, it was pretty sanctimonious.

Gorehounds’ eyes probably glossed over in bloodthirsty comeuppance when the callous organizer’s arms were dismembered and casually tossed into the back of a waste disposal truck. I, for one, felt like I was watching a bland WWE-produced horror film. It does perk up when those glorious FBI badges flash on the coroner.

I love how slowly but surely Mulder’s gallows humor is making a return visit (“Not even in the right waste basket.”). Also, the upward angles were a bit disorienting. Especially during Scully’s phone call from her brother where Duchovny gawked around like he was impatiently awaiting his cue. Then Scully’s camera-mounted gait down the stairs was equally haphazard. Sadly, Glen Morgan’s shot selection was an assembly of blunders.

It was a melancholy choice to cause a rift between the storylines of Mulder and Scully this far into the revival. Scully is visibly shellshocked after the call and Mulder doesn’t insist on visiting her mother in the hospital. What happened to the platonic loyalty? Once Scully arrives in the hosital, the dialogue between herself and the nurse is self-consciously expository (“Charlie is her son. They’re estranged….She didn’t ask for me? Her son Bill? Or her grandkids?….Yes mom and I talked about it after I was in the coma.”). 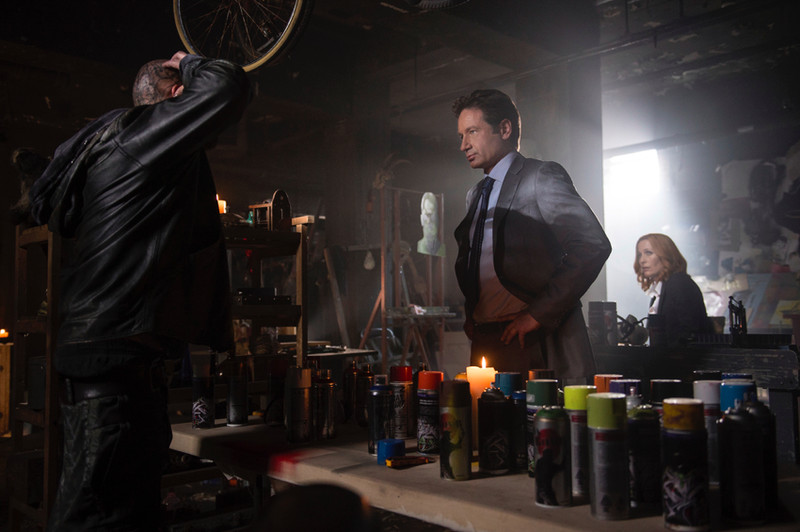 A flashback to Scully’s coma only heightens our attachment to the misbegotten love between Mulder and Scully and shows how this is a lethargic retrieval of that. Sorry but the Band-Aid Nose Man sounds too much like a Marvel reject and his gimmick is that he is a corporeal, graffiti painting and he turns people into wishbones. Not a very novel or gripping concept. Didn’t abate matters that it was the brainchild of a beatnik hobo who was quite grating to listen to as he prattled on about his irresponsibility to his “art”.

It think it’s safe to say this was the worst of the new episodes so far. Of course, it would be a valley after last week’s humdinger but this might rank among the worst episodes in memory. It was tragically ersatz, laughable (the incongruity of “Downtown” isn’t effective like Johnny Mathis’ “Wonderful” in Home), wildly amorphous and a far cry from the show’s acme.

This entry was posted in Reviews, TV, Uncategorized. Bookmark the permalink.