After a hiatus to coordinate the efforts of other notable contributors to the series (Glen Morgan, Darin Morgan, James Wong), Christ Carter has wrestled back writing and directing duties. This might be a precedent where the show acknowledges Islamic religious fervor as a source for extremism. Scully’s Catholic beliefs have always lent her a state of altruism and philanthropy through her gift of medicine. The combustion outside of the Ziggura exhibit was nerve-shredding and audacious for showing us the dangers of fanaticism for a higher power. Their tenets are their wrath against infidels. But how does this unravel into an X-file case?

For those who are worried that tenderfoot Agents Miller (Robbie Amell) and Einstein (Lauren Ambrose) will be the new Daggett and Reyes, let your blood pressure return to its normal rate. In no uncertain terms, Carter substantiates that Mulder and Scully have and will always be the occult torchbearers for the show.

I do enjoy how Mulder admires Miller’s gnostic curiosity (“He seemed like a bright young man.”). Much like Scully, Einstein is quick to presumably adjudicate like when she states that the only reason a collegiate professional like Scully would be relegated to a basement is because she is “in love with [Mulder]” and “challenges his b.s.”. Naturally, they are the next generation Odd Couple of freethinker vs. cynic and they are affable together but I wouldn’t hearten to an extended season with them alone.

Carter rachets up the race-against-the-clock tension when a radio broadcast is overheard in a cellar where another bomb is being assembled. Mulder’s lecture to Einstein about how “thoughts have mass” is a provocative essay and their ideological tug-of-war was a pleasure in mind-expansion. Duchovny has shaken off the cobwebs and he is rejoicing again in Mulder’s technobabble. Were it not for his track record, he would sound like a raving lunatic about magical mushrooms and that is why fans cherish him. 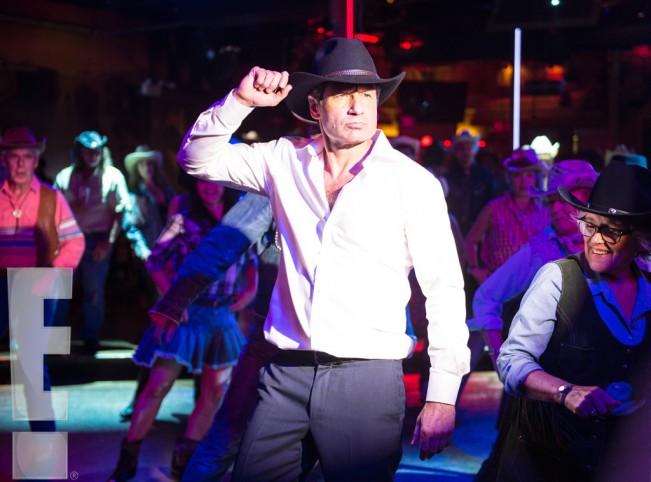 It was tastefully symmetrical that Mulder proposed his far-fetched idea while Scully adopted a more science-based method to extract information from the comatose bomber -magnetic imaging via an encephalogram. While they may not conclusively solve every case, Mulder and Scully synergize their different opinions for the same result of thwarting another crime.

Like a town crier who is bigoted against immigrants, the nurse’s sinister agenda to flatline her patient was compounded by her hatred. Nevertheless, it was a red herring as to whether the nurse was euthanizing him through directives or not. Normally, Mulder’s plans doesn’t entirely backfire but it was amusing how he was bamboozled by Einstein’s placebo effect.

Some might argue that the honkytonk hallucinogenic trip with Mulder was too broad but I truly loved its daring, facetious stream-of-consciousness from a Texan rodeo bar to the River Styx with lashes from the Cigarette-Smoking Man. It’s always sublime to see Duchovny be loose and his dance to “Achy Breaky Heart” qualifies. It was a potpourri of winks to the devoted fans with A.D. Skinner and the Lone Gunmen briefly appearing in Mulder’s cockamamie reverie. For rhapsodies this season, it is only eclipsed by Ash’s zany vision of Jacksonville.

So far, this has been a wildly fickle season of The X-Files. One week, we’re drudging through past histories and the next week, we’re elated at how subversive the show can still be. This episode was one of the better entries because it was acutely woven until a collosally anticlimactic deus ex machina at the hotel seizure.