Last year’s debut of Netflix’s Daredevil deflated me considerably. I thought there were too many pulled punches in terms of choreography, it focused too heavily on the law firm and Daredevil was a dull central character. Between Daredevil and Jessica Jones, I was more pleasantly surprised by the latter but I still think Daredevil possesses a lot of promise for the brooding grittiness that the Marvel Cinematic Universe has shied away from and the DC universe is embracing. For season 2, I decided to give capsule reviews of each of the 13 episodes in increments rather than a broad overview.

Already Season 2 is really nailing the sooty ambience of Hell’s Kitchen. It still has the Lexi Alexander aesthetic of yellow-and-neon-green lighting but when a broadcaster says there are record high temperatures, you can feel the beads of sweat. The laying-the-pipe origin story is over and now we can watch Daredevil in full breadth. I really liked his sadistic smile after the opening execution in the church. Drew Goddard is no longer the showrunner and this could explain the notable improvements. Foggy and Murdock have a more amiable chemistry than before. Now that Foggy has full knowledge of his alter-ego, it seemed tenable that Foggy would recognize a bleeding gash on Murdock, give his friendly advice on how he shouldn’t circumvent the law and not be completely schmaltzy about it (“You’re an asshole. If I can’t stop you, at least I can help.”).

Lip service is given to how the law firm is nearing insolvency and I prefer the shift to not being a case-of-the-week show anymore. The ripple effect of Wilson Fisk gives rise to the Irish mob again and thankfully, the leader doesn’t speak in a Lucky Charms accent. When he is toasting their reign, an ultraviolent bloodbath ensues with shattered Guinness bottles, critical neck wounds and many bodily perforations. It is a satisfyingly ruthless introduction to The Punisher a.k.a. Frank Castle (Jon Bernthal). He is an ethereal avenging angel who isn’t shown at first which builds into his fearsome reputation. It’s the Jaws principle and it works wonders.

One area I wish was resolved is the coy love triangle between Murdock, Foggy and Karen. It’s just delaying the inevitable chasm. Also, at the writer’s tabula rasa disposal is Murdock’s wider range of abilities such as his superhuman hearing when he narrows in on a detective’s analysis of a murder casualty’s Kevlar vest. Also, he might have heightened senses but he can’t multitask which explains why he misses the one informant’s testimony over the nearby coroner diagnosis. The frozen meatlocker scene shows that Castle is an unrepentant one-man army who is joylessly dismantling his enemies.

Again, his unhurried disarming of a hospital guard to toss his gun into a trash can is bravura example of his machismo. The adrenaline-surging fight on the rooftop between Daredevil and The Punisher beautifully distinguishes their styles: Daredevi moves with feline reflexes and effortless speed while The Punisher is constantly looking for the killshot with his rifle and sidearm. Overall, a gargantuan step up for the series. Dogs to a Gunfight

“Daredevil does it and the city cheers like we won the World Series.” Daredevil’s rising popularity in the urban areas can cause a new breed of copycats which are called “devil-worshippers”. A sensational expansion on Daredevil’s impact on rampant vigilantism. Murdock’s gradual, temporary desensitization to being deaf is a character highlight and illustrates how detrimental Castle can be. The witness-protection option is more closely affiliated to the main storyline which is why it doesn’t digress too mightily. Unlike Thomas Jane and Ray Stevenson before him, Bernthal isn’t beholden exclusively to the thousand-yard stare and he encapsulates Castle’s peevish, irritable side. Even while negotiating with the pawnbroker, he looks like a lion with a thorn in his paw. It’s always appetizing to watch Daredevil spar with The Punisher so soon after their last confrontation but status reports and panicked faces looking at a monitor from spectators is a bit hackneyed at this point. It was fresh in ‘Aliens’, revamped in ‘Predator 2’, now it’s a cheap cliche. 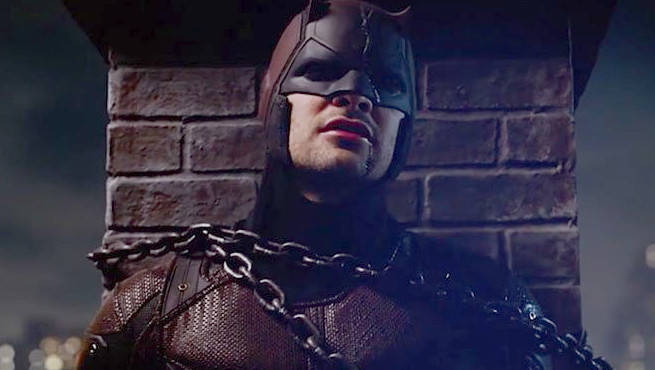 Is it just me or does the district attorney remind everyone of Vanessa Williams? Finally, the two caped crusaders are in a volatile face-off. Like a yeoman, Bernthal does “what’s required” and his military-grade weaponry is the perfect distillation of Marvel’s antihero- enough firepower to tip the scale of justice. While he is chained up, Charlie Cox’s accent is really incontrovertible. It shouldn’t be redubbed or reshot. Castle’s philosophy is that he is a soldier who doesn’t parade himself as something different for casual comforts. It’s not a moonlighting hobby where he removes the uniform. It’s a shrewd discourse where Punisher pointedly states “we don’t get to pick the things that fix us” and that his personal tragedy could only be becalm by his campaign of terror.

It’s a bit hypocritical that Daredevil says he doesn’t enjoy his bloodthirsty escapades though. I wish Rosario Dawson wasn’t subjugated to the scrappy side character and she was more pivotal than being an emergency room attendant. At a certain point, the ethical disagreements between the two duellists begin to sound like derivative sound bytes (“You hit ’em, they get back up. I hit ’em, they stay down.”). I admire the fiery exchange but they filibuster without exploring new angles and The Punisher should always be monosyllabic. Also, I haven’t seen the self-contradictory Daredevil show much leniency towards his prey except for his non-lethal amnesty towards Fisk. By far the best element is the tour-de-force, long-take fight down the stairwell with Daredevil wielding his chain like Ghost Rider. Tony Jaa would be proud and while it is definitely an art-direction flourish, the flashing red lights spring Dario Argento giallos to the mind. Whenever you want to show the shock value of sacrilegious villains always have them tip over a coffin, it immediately makes them detestable because of their lack of respect for the sanctity of the corporeal body. This is surprisingly sober and somber episode. The speech from the priest that one “sinful life lost” is representative of a “whole world” was quite poignantly delivered. Peter McRobbie is such a potent actor that he can instill Matt with Catholic guilt without it sounding dire or overwrought. I love the fact that Frank is such an unstoppable, undeterred force that anesthetizing needles, bullet wounds and taser guns in unison barely incapacitate him. The crickets in the background and bas-relief urine-color filter add to the seedy flavor of New York after hours. It feels stripped straight from the comics when Daredevil is deflecting fatal tools out of Frank’s hand and he retorts back “altar boy.” This is high praise if you’re looking for a definitive team-up between these two. It’s truly mesmerizing to watch them share a moment in the graveyard where Frank reminisces about his daughter when he returned home from service. Emmy and Golden Globes should consider Bernthal for this elegiac scene alone. It’s rare that an action-oriented show slows down to let us gorge on a fantastic, dialogue-driven, almost mumblecore scene of someone pouring out their heart. Unfortunately, this is the capper to The Punisher’s arc in Season 2.

This entry was posted in Reviews, TV and tagged daredevil, jon bernthal, netflix, season 2, the punisher. Bookmark the permalink.