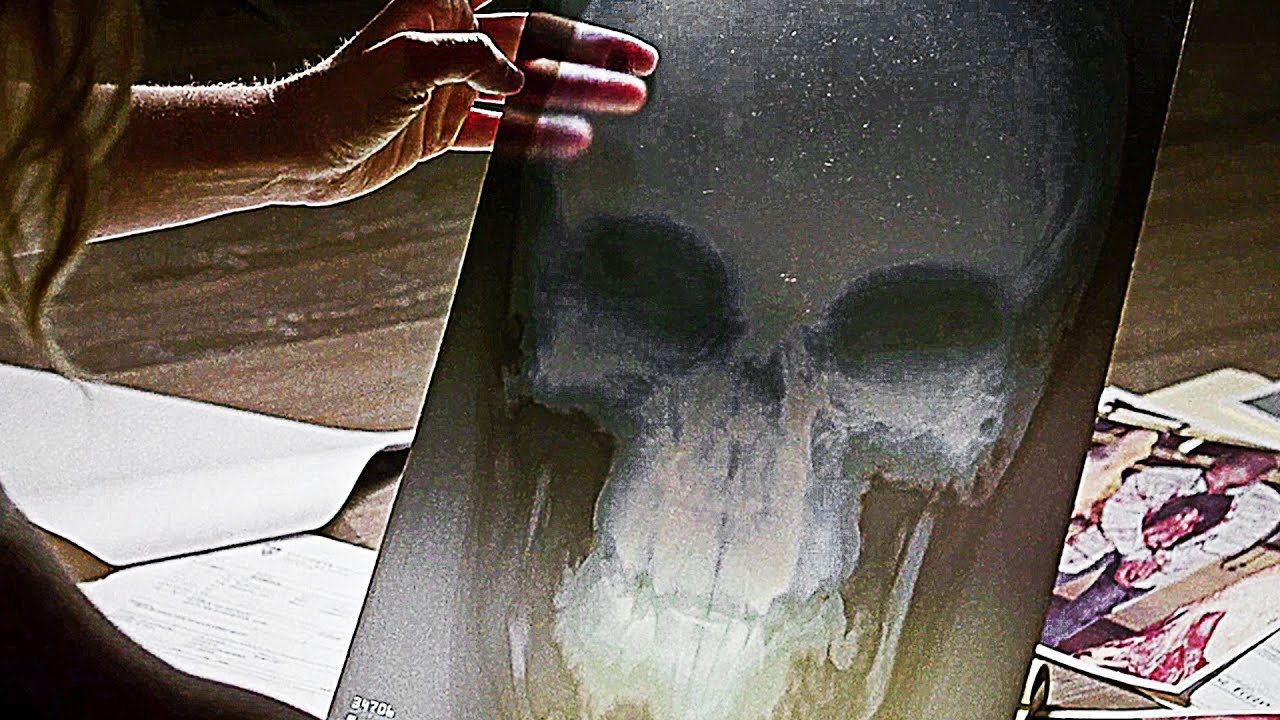 Studios require bankable parvenus to ensure profitability for their tentpole projects. This is the rationalization behind ‘Alias’ star Jennifer Garner’s non-ethnic version of Greek heiress Elektra Natchios in the lackluster Ben Affleck picture. Now, on the Netflix series, they can hire Elodie Yung is who is both exotically alluring and not a lacquered slab of wood on screen. I love that Murdock still has gaps in his interpersonal history and skeletons in his closet. This Elektra is now a daffodil either. She’s an impregnable warrior with a taste for bloodlust such as when she presents Matt with one of the men affiliated with his father’s murder (“There was always this glorious darkness inside you.”).

Finally, the Ross-Rachel, will-they, won’t-they tug-of-war between Matt and Karen is calcifying into a blooming romance. Thankfully, Foggy’s inebriated, sorrowful reaction to this news is not the quintessential spurred-friend-seeking-vengeance plotline that mirrors Harry Osbourne. He’s genuinely forlorn but his priorities are his flagging law practice losing two clients, not his colleague’s conflict-of-interest. In that respect, Elden Hensen’s performance is heartbreakingly underplayed. The flashback sex scene in the boxing ring feels craven and too sensually abstract next to Jessica Jones’ frame-slamming bedroom Olympics. I can see quibbles that this is an objectively decelerated episode but I enjoyed seeing one focused on Matt’s prowess with the women around him. Will all due respect to the first season, the Yakuza fight sequences this season are more aggressive and pain-inflicting. Ever since Wilson Fisk was dethroned at the end of last season, New York is now a vacancy for every criminal element to resume their business. Daredevil and Elektra are not star-crossed lovers; they’re belligerent, reluctant allies in league to suppress the corporate fiends. Since Daredevil has the unique position of also being a pettifogging lawyer, the show can debate the merits of capital punishment without it being an inorganic sermon. Though they aren’t “labeling it”, Karen and Matt’s relationship is too sacred and special to not recklessly put a target on Karen when/if Daredevil’s enemies learn of her.

It’s good to see that The Punisher’s presence in Season 2 was entirely frontloaded and he’ll continue to be mandatory component to it. Bernthal may be the definitive Frank Castle now. He has bored to the decayed core of the character. He is so dark, desolate and monomaniacal because he was once such a compassionate, loving individual. His tales of Frank Jr. in the kitchen closet show vestiges of his subterranean humanity. While the Punisher’s crusade to expose the police corruption is vital, the ledger MacGuffin with Elektra is a bit threadbare in comparison. 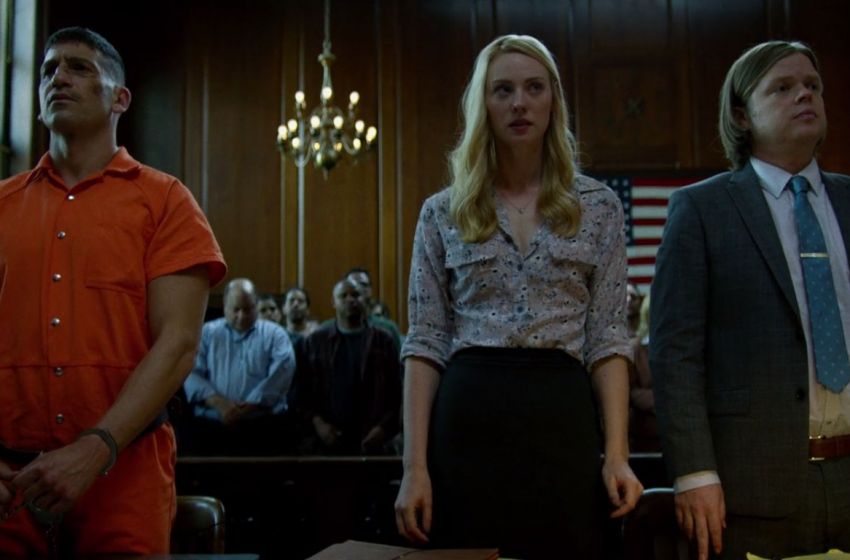 Law & Order: Marvel Unit begins in this episode and references to the Son of Sam and other New York mass murderers tethers the show to a more tangible realm than most comic-book incarnations. Mounting a legal defense for the radical extremist of the Marvel universe is not the easiest task as shown when the the trio are discussing how a reduced, commuted sentence to another jurisdiction and a PTSD plea are the best possible defenses for Frank.

While it is ceaselessly oxygenating to watch Daredevil and Elektra counterattack expendable Yakuza henchmen in a train yard and warehouse, I hope that Season 2 has an omnipotent supervillain up its sleeve. The rock-’em, sock-’em Wilson Fisk alleyway skirmish was the late-inning centerpiece of Season 1 and I’m hoping we didn’t peak with Daredevil subduing the Punisher and bringing him to the authorities as our premature finale. The scar examination scene is nod to Jaws and Lethal Weapon 3 and it ignites the same loins. Surprisingly, for a superhero show, strategizing on how to upend a medical examiner’s testimony is more thrilling than a dozen shogun showdowns. It’s also gratifying to see Foggy emerge from his sidekick flop sweat to be a first-class litigator after a couple stumbling attempts at an opening statement. Reintroducing Zatoichi…er, Stick back into the frying pan was a great idea as his slice-and-dice dismemberments above the hole proved. With stories of his heroism, Frank Castle could be seen as a fictional version of John McCain; a true legend baptized in fire. I wish we could’ve seen a reenactment or flashback to the landing-zone anecdote that his commanding officer said in deference to him. Same goes for Stick’s backstory on the Hand and the secret to immortality. Thankfully, Scott Glenn is such a talisman that his storytelling skills are unparalleled and we don’t mind that it is violating the show-don’t-tell screenwriting rule.

It does seem contrived that Foggy would insist that Matt is the primary person to cross-examine Frank on the stand because “[he’s] as crazy as [Frank] is.” However, the plan backfires and you can’t help but respect how unapologetic Castle is about his reign of terror. He finally owns up to the name Punisher. Additionally, I couldn’t swallow the instantaneous conversion of Elektra forsaking her training with Stick for a more tranquil life with Matt. She’s been a battle-tested yeoman and now her heart has thawed because of a chest wound? Not too likely. 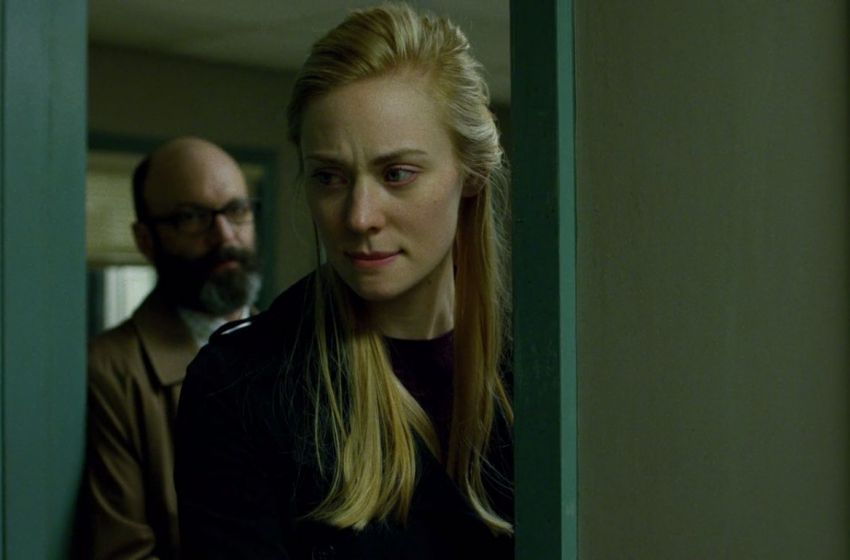 I’m inconceivably chipper that Kingpin is still the puppetmaster from behind the jail bars. He was too monumental to be brushed off in just a season’s notice. D’Onofrio looks like a disciplined child when he is stripped of his jewelry and luxurious assets during intake. Despite his turgid size and immense wealth and connections, Fisk is still treated like a white-collar pantywaist who is being indicted on faulty land deals and not a string of homicides. In B-movie genre fare like this, D’Onofrio is still a brilliant masterstroke on the casting front.

Some people might complain that this Season is focusing more on the villains but if Gotham can be extolled for its reconfiguration towards the more flamboyant characters, why can’t Daredevil? Matt Murdock and most of his ilk are the moral centers and not necessarily as trance-inducing as the grey area where The Punisher, Elektra and Wilson Fisk live. Much like Peter Parker in Spider-Man 2, Matt’s priorities are completely lopsided and he spends much more time in the Daredevil suit than his three-piece, seersucker suit. Season 1 appealed to the emotional side when Daredevil rescued an abducted child after a prolonged hallway fight but Season 2 is more highbrow with pursuits into a cesspool of bureaucratic conspiracy, scofflaws vs a crooked sense of justice and complete honesty when ignorance is more insulating

A double-cross by Wilson Fisk could be anticipated but the claustrophobic standoff between Frank and several prisoners was a grandly splatterific capstone to it. Each set piece is lathered in more viscera and hemoglobin, I’m convinced that this would be definitely be R-rated for its content despite the milder language and absence of nudity.