Posted on April 5, 2016 by curtisrunstedler 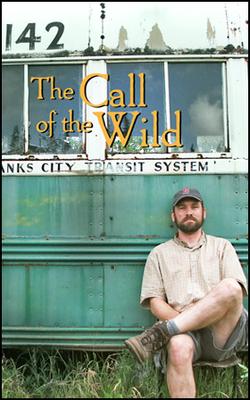 Ron Lamothe’s film The Call of the Wild (2007) is an extraordinary documentary that primarily focusses on the ill-fated quest of Chris McCandless (also subject of Sean Penn’s film Into the Wild, my favourite film, and Jon Krakauer’s book of the same name), a young man who decided to leave it all behind and embark on his own personal Waldenesque quest into the wild. It is also, however, Lamothe’s own interesting journey into the wilds and heart of America. From conversations with the lovely folks in Slab City to hitching with ex-convicts in South Dakota, Lamothe retraces McCandless’s journey while also fulfilling his own dreams. While some see Chris’s story as “stupid” and quixotic, others see it as a determined romance that ended in tragedy. Indifferent or not, however, people remember Chris’s story. In small town Carthage, South Dakota, everyone still remembers him like it was yesterday. I was particularly charmed by the hospitality of all these people – these are touching vignettes of American society, and I was particularly drawn to the altruism of it, their willingness to help out one another, the very meaning of friendship. Perhaps McCandless was drawn to this sense of hospitality as well.

But what drove Chris to desert his promising career path and lifestyle and turn to the road and eventually the Alaskan wilderness? Lamothe has his own theories about it, but I don’t think it was a generational thing. I think it touched on something universal. I think it was his disillusionment with society and capitalist lifestyle. He saw where his life was heading and he saw it as a familiar pattern: find a career, work, get married, have kids, and die. And he realised that there’s more to life than that, and he wanted to see it while he could. He nearly made it too, and was damn resourceful in the time that was given to him. Perhaps that’s the greatest tragedy of it all, and you can see the awareness of his impending death in his final photographs that transcends his hopeful smile. It is an old, wearied look that haunts his reckless youth.

Interestingly enough, Sean Penn was filming Into the Wild at the same time as Lamothe, and unfortunately this affects some of his key interviews. One wonders what his film would have been like and the stories that would have been told if the timing had been different. Still, both films are excellent in their own way. Naturally, the documentary style makes it more realistic than Penn’s passionate and romantic take on it. What I loved most about the film was that at its heart, it is about stories, the stories that people remember and hold onto, the stories that keep them going, the stories that define them. I loved hearing about the eccentric guy in Slab City and the Yellow Brick Road, and the kind South Dakota man who packed Chris sandwiches, and even from the Alaskan trappers (whose views I don’t necessarily share), whose insights raise different perspectives on the incident.

Despite the trappers’ ill view of Chris (he wasn’t cut out for it, wasn’t experienced enough, etc) I’m still drawn to the romance of it, much like Lamothe, Penn, and Krakauer. I think Chris tapped into something that we all want to experience but are bound by social obligations. Chris decided to break those barriers and live beyond society and it almost worked, but in the end, it cost him his life. Still, his story has inspired so many people, and a simple YouTube search reveals that many folks have followed in his footsteps, travelling up to Healey, Alaska to see the Magic Bus and the last resting place.

Lamothe also comes to some interesting conclusions about Chris’ fate, noting that his BMI was critically low towards the end of his life (making his death inevitable), rather than Krakauer’s original theory that he ingested toxic alkaloids from seeds or ingested the mould from them. Krakauer has since revised his theory, but I still think Lamothe’s theory is most convincing. Chris wasn’t getting enough caloric intake, and I think everyone can agree that the mismanagement of the moose meat was the turning point for him.

Still, Chris’s story raises fundamental questions about our society and our own needs and drives, and that’s why I think his story is so important. The first half of the film focusses on Lamothe’s journey there, and it’s not until the final third that he reveals his exciting evidence about the whole case. For a low budget documentary, it’s masterfully done, and a joy to watch. It also makes you think about the people you meet and the colourful stories they have to tell, and the relationships between us that leads us to where we are now.

This entry was posted in Movies, Reviews, Runstedler's DVD Pick of the Month and tagged Alaska, Chris McCandless, death, documentary, Into the Wild, road trip, survival, wilderness. Bookmark the permalink.