Posted on October 1, 2016 by castordurden 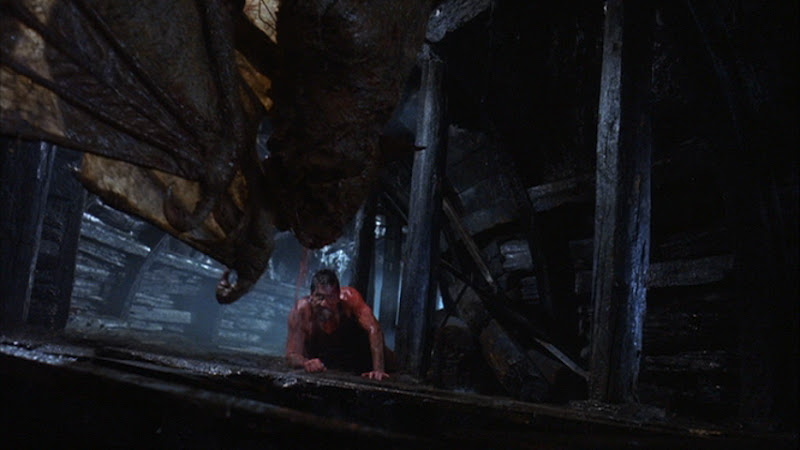 Subterranean horror doesn’t get much more Augean or sordid than Graveyard Shift which endeavors to make the audience feel like they need a tetanus shot after the last frame. In that respect of sweatshop atmosphere, the film is a humdinger. The mill is a rat-infested, diseased den of pestilence and the creature responsible for the multiple mutilations is a gooey, repulsive bat out of hell. Ralph S. Singleton hints at a ‘Willard’-esque rodent revolution when a textile worker is punished after grinding a rat in a cotton picker to “make an example” of it.

However, the nocturnal beast is a much larger opponent. Since it is based on a short story from Stephen King, the material is sometimes threadbare but the creepy aura fortifies the film greatly. Every shot is bedraggled and damp. Also underlining the wafer-thin plot are rabid supporting roles from the glassy-eyed Brad Dourif as a gleefully sadistic, tobacco-chewing exterminator and Stephen Macht as the megalomaniacal foreman. As per the cliché, Macht is foreshadowed as the secondary villain when he gnashes on an apple. It’s also evergreen to see character actor David Andrews as the drifter lead of the mood piece. Dourif delivers an entertainingly cockeyed monologue about the origins of his prejudice and how the Vietcong utilized vermin for extreme rendition. I do wish his interplay was less smoldering antihero (“You get no guarantees with any man. It’s only instinct.”).

In the subsequent years since the film’s debut in 1990, writers have neglected the care to populate B-movies with multilayered characters such as John Hall, Warwick and Tucker Cleveland. As with most horror films, the middle drags its feet before Tucker is killed in a swampy burial. Frankly this is an anticlimactic ending for such a memorably loopy sidekick. Naturally, the turning-point into the grimy conclusion is Warwick and Hall’s fisticuffs in the skeletal lair and it’s executed with grossly unpalatable panache. Unfortunately, the critter-centric ending is frequently underwhelming since the animatronic is only briefly glimpsed and the pell-mell behavior from Warwick is overamped past believability. As far as King adaptations go, this is a superlatively yucky example of one of his lesser works.