Posted on October 3, 2016 by castordurden Daredevil skulks Hell’s Kitchen for criminals but he is hardly confronted by thugs and gutter snipes which distinguishes Luke Cage from his New York City counterparts. Like Will Graham pre-visualized the crime scene from the sociopath’s perspective, Paul McGuigan reiterates the gimmick here with Misty Knight (Simone Missick) but it’s to a lesser effect and more of a flashy digression. I love the seething tension between Cottonmouth and Cage while he is being shaved by Pops. The ultimate gestures of Cottonmouth’s arrogance is his ridicule over Cage’s multiple positions (“More jobs than a Jamaican.”) and his self-absorbed forgetfulness of his name. Nothing more degrading than that.

The brief flashback to Pops’ knuckle-duster past as a delinquent OG lends texture to his reformation as a small-business owner and mentor to Luke. With the Trump Foundation contribution under scrutiny, even a legitimate, supposedly sacrosanct organization like the Harlem Green Renaissance is not spotless. Unlike most comic books outside of Frank Miller and Alan Moore, the showrunners of Luke Cage interlaces art-imitating-life elements into its storylines.

Adrenaline junkies will balk that Cage isn’t a collage of whizz-bang fight scenes. Henceforth, the bursts of drive-by fatalities are more remarkable and cathartic such as when Pops is assassinated by Stokes’ lackeys. Pop’s terminal line about “always looking forward” is a tad schmaltzy though. Colter is more of an implosive actor and when he does weep over Pops, it’s poignant access into Cage’s soul. Same goes for his volcanic Crispus Attucks speech. Unfortunately, every pulpy zinger from Stokes is a Scarface-lite cliche about mammon (“The money’s still green.”). 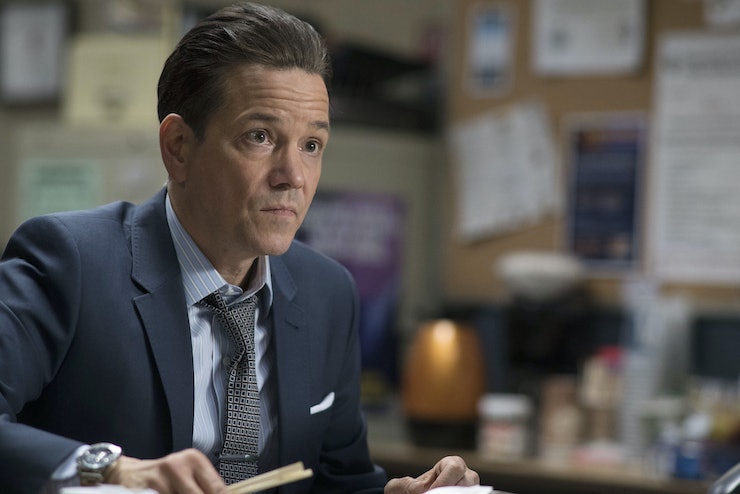 This episode is where the Ennio Morricone-esque soundtrack truly shines. By now, Whaley is scuttling the rim of the offensive, all-inclusively racist stereotype by either condescendingly parroting ebonics or ingratiating himself with his partner via black memorandums to Driving Miss Daisy. If he were to be collateral damage between gunplay, his utility as comic relief will be void.

From the politicians to the mortician, it’s insurmountable how universal Stokes’ empire extends. Of course, Luke is a warrior who cannot be bought. It’s a neoclassical conflict between the forces of good and evil in the Old West. While people would usually face each other while discussing plans on a “beehive of misery” inside a slash house, it’s majestically operatic when Luke smiles into the camera when he hears that the fortress is a “suicide mission.”

Perhaps, the game plan is a slow-burn sizzle en route to dazzling choreography but Cage’s raids and systematic dismantling of Stokes’ tentacled kingdom, are too pragmatic, rhetorical and untoward without pushing-the-envelope flourishes. The seams are crystalline when the shot cuts from Colter interdigitating guns to the next shot of the mangled firearms on the floor.

This complaint is quickly rectified when Cage wrenches a car door as a shield for a building onslaught and his hoodie is the consistency of Swiss cheese by its conclusion. I still quibble that the bodily fisticuffs could be more fluid and invigorating if the camera placement wasn’t above the waist and utilized more master shots and long takes like stunt coordinators Chad Stahelski and David Leitch. Is it just me or was the rocket launcher a cockamamie weapon after the uphill battle for the show to be less campy than other comic books?

Suddenly, the casting of Whaley isn’t a miscalculation. Whaley is usually a scoundrel and now that he is on Stokes’ payroll, why they hired him is no longer murky. The Georgia penitentiary backstory reminded me fondly of Djago Unchained with Cage walking lockstep under the thumb of sadistic wardens. They tantalize the audience with speculation on how Luke became a disgraced police officer in the penal system (the options are typically “pride, power or pussy”).

In this section, Colter metamorphoses into Michael Jai White in the direct-to-DVD Undisputed films when he is offered to be the competitor in a gladiatorial bloodsport behind bars. The conversation about Beyonce, Nicki Minaj and Lisa Bonet is rib-tickling repartee between two warm-blooded heterosexuals. The mangy beard and wig atop Colter is another frugal appliance in a show that has been fiscally scaled down from the other Netflix shows.

What I imagined would be the most combustible stretch in the Cage’s Seagate saga is actually the most sluggish and lackluster. The chemistry between himself and his counselor is quaint but it doesn’t enkindle enough embers to subjugate the central manipulation to coerce Cage into the ring. The bouts are underpopulated by guards and other convicts which would feed into the testosterone.

It doesn’t help that the flow is constantly interrupted by detectives reconnoitering non-gnostic surveillance to the restaurant explosion. In a visual bromide of cleansing the palette for proactive resistance, Luke buzzes his head before enacting a plan of revenge. The answer to how Luke’s indestructibility originated is a staggeringly rushed, derivative procedure while he is on his deathbed after a severe beating from his cellmates.