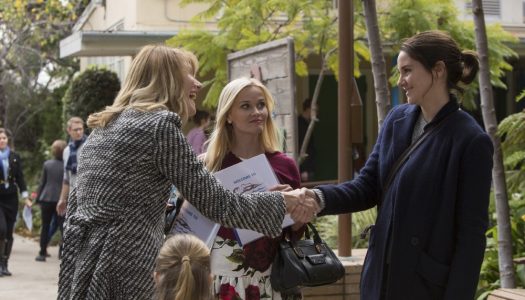 Jean-Marc Vallee is a unique observer of slice-of-life Americana since he brings the baggage of a French heritage. He makes the familiar peccadillos of small-town USA into expressionistic cries (e.g. The bleary, visually muddy view of the red-and-white police squad lights over heavy panting) of David E. Kelly’s miniseries about embattled, gossiping housewives. The alliterative Madeline Martha Mackenzie (Reese Witherspoon) is the lynchpin for the inciting incident at the school fundraiser.

Like Nic Pizzolatto’s True Detective, the storytelling hinges on eyewitness testimonials from the aforementioned incident. Witherspoon is splendidly cast and her loquacious, multitasking character (“My mom’s an active talker.”) clearly craves the spotlight among her peers. She dramatically confronts her daughter’s texting friend and later, a happenstance around an ankle twist causes the snowball effect. In fact, Mackenzie could be the spiritual aunt of her overachiever from Election.

Madeline treats her acquaintances as utilitarian possessions. I love how she passively points out Celeste Wright’s (Nicole Kidman) child as if it were a lipstick in her attache case. Without hesitation, Kelley carves into out-of-one’s-element essence of the new-in-town single mother Jane Chapman (Shailene Woodley). When Madeline says “This is Monteray. We pound people with ‘nice'”, it’s a threat to her if she bastardizes the status quo of the carpooling sect.

A petition to halt the stage production of Avenue Q at the school metastasizes from a minor nuisance into a major topic of dinner conversation. It shows how people who live vicariously through the molding of their children become transfixed with preventing empty-nester syndrome (“I’m a mom. This is my universe.”). Poor Adam Scott is the “consolation prize” for divorcee Mackenzie and in his own askew delivery, he makes the viewers ache at Ed’s impotence.

By virtue of Kelly’s tart writing, the women of Monteray are gentrified by what clubs they belong to, what cliques they rotate into and what achievements their children accomplish. The only character who feels undernourished in the first episode is Celeste who is in a May-December romance with the younger stud Perry (Alexander Skarsgard). As the third leg of trio, she is a bit static beneath the umbrage of Madeline and Jane.

As a moderate runner, I can attest to the purifying power that jogging has on your mindset. I’ve never been a member of a community in which the residents participated in running together as a bonding experience. As an examination of rumor mills and parental defense mechanisms (Jane staunchly believes her son when he rebukes accusations that he strangled Renata Klein’s (Laura Dern) daughter), the show is compulsively incisive, morbidly funny and a rollicking showcase for unsung actresses.