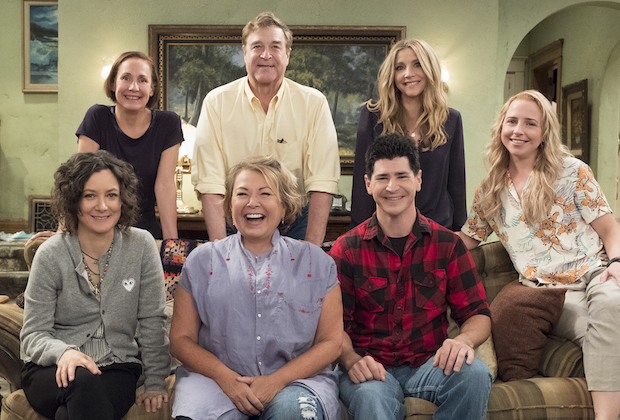 Roseanne Barr’s sitcom was always about the blue-collar, working-class woes of the Rust Belt. With the announcement of another revamp, fans of the original series were apprehensive especially after Season 8-9 were such a grandiose failure of esoteric anticlimaxes. Happily though, Season 10 is a riotously funny success that sheds the bitter aftertaste of the Connor’s serendipitous lottery win and Dan’s heart attack.

At the center of this premiere episode is the debate between Roseanne and Jackie (Laurie Metcalf) over the presidential election. Many of the jabs are politically pungent (when the family is about to “say grace” before dinner, Roseanne asks Jackie if she would like to take a knee) and from Roseanne’s bumpkin perspective, her support of Trump is aligned with her character since his rhetoric was about job stimuli.

After the initial inside-joke about Dan (John Goodman) being deceased and Goodman visibly scrolling the cue cards, the show kneads out the hiatus pangs for a smoother reintroduction to Roseanne’s rogues gallery. Sara Gilbert and Lecy Goranson effortlessly reprise the arsenic-and-nectar interplay between the dueling sisters. Ex-military DJ (Michael Fishman) is given short shrift but then again, he was always a minor character within the nuclear family.

Sarah Chalke as the surrogate benefactor to Becky is a shrewd way of a breaking-the-fourth-wall clashing between two eras on the show. Several of the punchlines elicit chortles including a droll exchange between Darlene’s effeminate son and Dan (“I like your nail polish.” “That’s not nail polish, son. That’s dry-wall.”).

The show hasn’t lost the zeitgeist pulse of the fly-over Red State mentality(Dan is apoplectic over Becky’s decision for her uterus to be the host of another woman’s child). They might be slower on the progression scale , but the Connors are an all-inclusive, amenable family regardless.

This entry was posted in Reviews, TV and tagged abc, john goodman, roseanne. Bookmark the permalink.