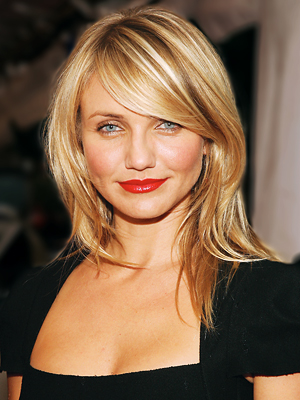 I chose Cameron Diaz today because I think she’s pretty cool. Say what you will about her, but she has been in very memorable movies. She made her debut in The Mask, alongside Jim Carrey, she co-starred in what I believe is her best performance to date in Being John Malkovich, and she styled her hair with semen in There’s Something About Mary! And of course, she was one of title characters in Charlie’s Angels 1 & 2, as well as having done child-friendly roles in the Shrek films as Princess Fiona. While she made a name for herself as a ditsy blonde, I think she quickly got out of that type-casting nightmare and presented herself in much more serious roles in films such as Vanilla Sky, Gangs of New York, and My Sister’s Keeper. And with an upcoming role in The Green Hornet, it’s really hard to hate Cameron Diaz.