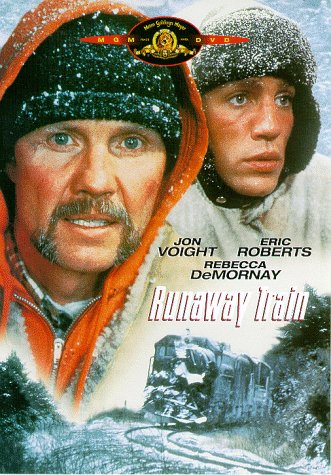 Since I just saw the Denzel Washington/Tony Scott film, Unstoppable, which involved a runaway train, I thought it was only fitting that my latest edition of this column cover the granddaddy of runaway train movies… which, appropriately enough, is named Runaway Train. While Unstoppable followed a traditional Hollywood formula (and did it very well), this highly underrated effort has often been classified as an “existential action film”. It’s not often that a non-stop action film will conclude with a passage from Shakespeare, but Runaway Train actually fades to black with this quote from Richard III: “No beast so fierce but knows some touch of pity but I know none and therefore am no beast”. It’s clear that one of the story’s main themes is the animalistic nature of human beings, and the film is much deeper than a simple depiction of a locomotive plowing through everything. Believe it or not, the original screenplay for Runaway Train was written by Akira Kurosawa, but after having little success at getting the film made himself, Kurosawa sold off the rights to his story. The script was given some rewrites, the directorial reins were handed off to Andrei Konchalovsky, and the film was eventually released by the Cannon Group. I’ve already discussed the Cannon Group in my column about The Delta Force and, needless to say, no one would EVER think the words “Cannon Group” and “Akira Kurosawa” belonged in the same sentence! However, despite being the king of brainless, schlocky action films in the 1980s, Cannon could occasionally deliver a work of quality and Runaway Train is probably their greatest effort.

The film opens in Stonehaven Maximum Security Prison, which is located in the middle of nowhere in the frozen tundra of Alaska. The most prominent convict at the prison is a notorious bank robber named Manny (Jon Voight), who is so popular among his fellow inmates that Warden Ranken (John P. Ryan) has had him welded in a cell for three years. However, Manny has just won a civil rights suit which will allow him to be released into the general population again. Ranken considers Manny to be an animal and has such a hatred for him that he secretly hopes that Manny tries to escape, so that he’ll have license to hunt him down and kill him. Manny and a younger convict named Buck (Eric Roberts) eventually do make an escape and wind up hitching a ride on a train at a nearby rail yard. What they don’t know is that the engineer has just suffered a heart attack and fallen out of the cab as the train started moving. After its brakes burn off, the unmanned train starts accelerating through the Alaskan tundra at a high rate of speed while the railway tries to figure out a way to stop it.

Another complication arises when it’s revealed that a female railway employee named Sara (Rebecca De Mornay) was taking a nap on the train as it pulled out of the station and is now trapped onboard with the two convicts. And even though Manny and Buck are in a highly dangerous situation where there lives are in jeopardy, Warden Ranken is so obsessed with catching and killing Manny himself that he intends to use a helicopter to go after the train. After finding out about the escape, Ranken actually has a sadistic grin on his face and says: “God… don’t kill him. Let me do it!”. Now, all my previous talk about existentialism and Shakespeare may have given off the false impression that Runaway Train is a pretentious film, but I can assure you that it’s not. It is an action movie first and foremost, but it also happens to be a very intelligent one. The eighties were the time period when action movies became less interested in plot and character and focused entirely on the pyrotechnics, but considering its origins as a Kurosawa screenplay, Runaway Train clearly did not want to go in that direction. One of the film’s best scenes is this monologue by Manny about how much he envies a man who can work a demeaning, low-paying job and avoid a life of crime. This is certainly not a speech that you would ever see in a modern Hollywood blockbuster like Unstoppable.

However, well-written scenes like that are just icing on the cake for what is a pretty exciting action-adventure flick. The movie is extremely well-paced, the production values are first-rate, and the action and stunt sequences are outstanding. One of my favourite things about Unstoppable was that most of its stunts and special effects were practical and the movie did not rely heavily on CGI. Well, since Runaway Train was made in the era before CGI, all of its action scenes had to be done practically and they look terrific. Some of the stunts, such as where a character tries to lower himself from a helicopter onto the top of the ice-covered train, just look extremely dangerous and have such great impact because they don’t feel faked at all. Jon Voight and Eric Roberts both earned Oscar nominations for their performances in this film, which were well-deserved. Though Voight has become known for playing a lot of over-the-top villains and colourful characters throughout the last fifteen years, no had ever seen him in a role like this at the time Runaway Train came out. He succeeds brilliantly at making Manny into a ferocious, unstable, but surprisingly sympathetic individual. You can make all the jokes you want about Eric Roberts, but the guy was quite an outstanding actor at the beginning of his career in films like this and Star 80. Buck is a very dim-witted individual who’s often quite obnoxious and annoying, but that is the whole point of his character, and Roberts portrays him very well. This key sequence where Manny and Buck get angry and nearly try to kill each other is extremely well-acted and effectively conveys the film’s theme about how humans can devolve into animals so easily.

John R. Ryan, a personal favourite character actor of mine, makes a wonderfully sadistic villain as Ranken, and it’s also worth noting that a couple of notable cult actors make their film debuts in Runaway Train. The immortal Danny Trejo makes the very first of his many acting appearances as a prisoner who gets into a boxing match with Buck, and Tom “Tiny” Lister Jr. has a nice bit part as one of the prison guards. Another strong performance is delivered by Edward Bunker, who plays Manny’s best friend at the prison. Bunker was a former criminal who is famous for becoming a best-selling crime novelist during his time in prison and is probably best-known for having played the role of Mr. Blue in Reservoir Dogs. He’s also one of the credited screenwriters on this film and is apparently the one who came up with Manny’s memorable monologue. The last fifteen minutes of Runaway Train are particularly terrific and build up to an amazing conclusion that is one of the more emotionally powerful endings you will ever see in an action film. Runaway Train has definitely stood the test of time and I really have no idea why it remains so underrated today. It’s possible that people simply avoid it because they believe it’s either too intelligent or too dumb for them. Being associated with the Cannon Group and being labeled “an existential action group” can create a lot of skepticism within two very different demographics. However, Runaway Train is definitely worth checking out and shows that it is possible to make a very well-written non-stop roller coaster ride.