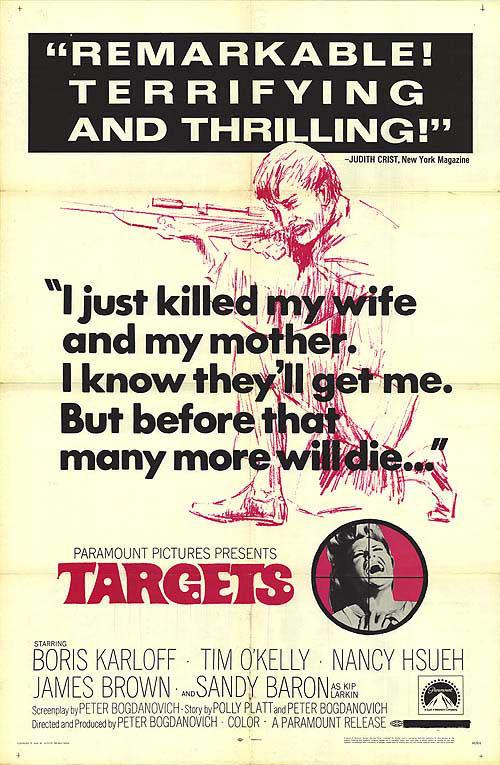 With today being Boris Karloff’s birthday, I thought it only appropriate to pay tribute to a hugely underrated film that contains what may be the best performance of his career. If you heard the backstory behind Targets, you probably wouldn’t have much faith in it turning out very good. Before hitting it big with The Last Picture Show, director Peter Bogdanovich was a young protege of B-movie icon Roger Corman. Bogdanovich’s first major task as a director involved him shooting a couple of scenes that would be later be mixed together with footage from some unreleased Russian sci-fi film, and the finished product was released under the title Voyage to the Planet of Prehistoric Women. When Bogdanovich finally got the chance to direct a “real” film, the circumstances were similar. In his contract, Boris Karloff still owed Roger Corman two days of work, so Corman instructed Bogdanovich to shoot a bunch of scenes with Karloff and then mix them together with old footage from The Terror, a horror film that Corman had made with Karloff back in 1963 (which also featured an early performance from a young Jack Nicholson, hilariously miscast as a Napoleonic soldier). The intention was to cobble enough footage together to create a releasable movie, but Bogdanovich had a much more inspired idea. The Terror was a pretty lousy Gothic horror movie which had also been cobbled together under similar circumstances, and Bogdanovich really had no interest in making a film like it. Instead, he decided he would use the footage from The Terror to tell a unique “breaking the fourth wall” story about the evolution of horror. Boris Karloff would essentially be playing himself and the main theme of Targets would be how cheesy old-school horror films like The Terror were becoming obsolete because of the real-life horror going on in the world. If you’re a student of the horror genre, I’m not sure that any film showcases the dramatic transition the genre was about to take better than Targets.

Targets starts off in a very unique fashion as its opening credit sequence consists entirely of footage from another movie. As the opening titles play over a selection of scenes from The Terror, the movie makes a surprising transition to the sight of Boris Karloff and Peter Bogdanovich watching the footage in a screening room. It’s established that Karloff is portraying an aging horror movie star named Byron Orlok, Bogdanovich is playing a director named Sammy Michaels, and The Terror is the film-within-a-film that they have just made together. After viewing the dailies from The Terror, Byron Orlok gets very disillusioned and suddenly decides that he wants to retire from acting. His rationale is that he has become a laughable old relic and that the old-fashioned horror movies that he has built his career on just cannot compete with the real horrors that the world is currently experiencing. As Byron talks about this, the movie then makes its transition from a fictitious screen monster to a real-life monster named Bobby Thompson (Tim O’Kelly, an unknown actor who bears quite a resemblance to Matt Damon), who is watching Byron through the sight of a sniper rifle he has just purchased. Bobby seems like an ordinary, clean-cut, all-American young man who seems to be happily married and has a great relationship with his parents, but something just isn’t right about him. It’s pretty obvious that Bobby is modeled on the notorious Charles Whitman, who went on one of the world’s most infamous shooting rampages in 1966 when he shot and murdered 16 people with a sniper’s rifle from a tower at the University of Texas. In this scene, it’s clear that Bobby has started to become enraptured with the power of a sniper’s rifle while practicing at the shooting range with his father.

The first half of Targets is a slow, deliberate build-up that intercuts between the two parallel stories of Byron and Bobby, but the film really starts to take off after Bobby finally snaps one morning, as he casually shoots his wife and mother and decides to go on a killing spree. This leads to two astonishing and brilliantly crafted sequences: one involves Bobby using his rifle to pick off random motorists on the freeway, and the second is a hair-raising climax that involves Bobby hiding on top of the screen at a drive-in theater, shooting people in their cars as they watch the movie. Of course, the movie that just happens to be playing at the drive-in is The Terror and Byron Orlok is also there to make a personal appearance, so you know that the fictional monster and the real monster will eventually cross paths. Peter Bogdanovich could not have foreseen the future of the horror genre any better. Hell, the fact that the climax is held in a drive-in just adds an extra dimension to his “old horror vs. new horror” theme since drive-in theaters have also become obsolete. This was a time period where horror fans were starting to reject old-school Gothic horror stories featuring the likes Dracula and Frankenstein and studios like Hammer Film Productions were already on their way down. Targets was also made right when the MPAA was being formed and films were no longer being going to be held back by the taboos of screen violence. By the seventies, audiences were identifying more with horror movies that had a realistic edge to them and reflected the horror of the world they lived in. They embraced films such as The Texas Chainsaw Massacre and Last House on the Left, which featured characters who were modeled after real-life monsters like Ed Gein and Charles Manson. Horror movie stars like Boris Karloff, Bela Lugosi and Lon Chaney, Jr. are often so associated with the iconic characters they played that they never get the credit they deserve for being great actors. Karloff is simply wonderful in the role of Byron Orlok, a character who is very clearly patterned after his real-life personality. Like many stars of the genre, Karloff was relegated to appearing in a lot of low-budget, bottom-of-the barrel junk after his brand of horror went out of style, but his performance in Targets was a terrific capper to his long career and probably should have garnered him an Oscar nomination.

Targets eventually secured distribution from Paramount Pictures and turned out to be a much more prescient film that anyone could have anticipated. Even though it was completed near the end of 1967, the assassinations of Martin Luther King and Robert Kennedy wound up taking place before the film could garner a theatrical release. Needless to say, the scenes involving an assassin with a sniper’s rifle gave Targets an eerie topical relevance, and Paramount got so nervous that they decided to distribute the film with a written prologue denouncing gun violence. Even though the film made back its very low budget and helped jumpstart Peter Bogdanovich’s career, Targets was not a big box office success and that may be why it’s never really received the credit it deserves. Bogdanovich was never a big fan of the horror genre to begin with, so after his success with The Last Picture Show, he never directed another horror or suspense picture again, which is a shame since his staging of the sniper sequences in Targets showed that he had a great talent for generating screen tension. You could almost say that Targets predates postmodern self-aware horror movies like Scream by several decades. Instead of simply referencing the typical cliches of the genre, Targets actually showcases them through its usage of footage from The Terror, and then shocks the audience by presenting its own violence in a very cold, mechanical fashion that doesn’t feature a melodramatic musical score in the background. It’s hard to decide whether to simply classify Targets as a horror film or as a reflection on the nature of horror, but whatever it is, it’s very effective at what it does. The film may be highly underrated and not particularly well known amongst genre aficionados, but Targets does represent a major turning point in a horror movie history.