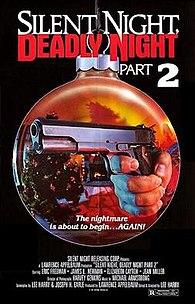 Remember the Simpsons episode about the Itchy & Scratchy Movie where at the end of the trailer, the voice-over guy rapidly reads the disclaimer “53 % new footage”? Well, they actually could have used that disclaimer for Silent Night, Deadly Night Part 2, a sequel where half the running time is literally composed of flashback footage from the original film! I already talked a bit about the infamous Silent Night, Deadly Night in my “Ten Great Death Scenes from Ten Not-so-Great Horror Movies” column as there was a tremendous controversy surrounding this film when it was originally released. Parents’ groups were outraged that a horror movie would have the nerve to showcase a guy in a Santa suit committing murder (even though it was far from the first film to ever do that, but never mind) and decided to picket the theatres which were playing it. Siskel & Ebert did a lot to add to the controversy with this angry condemnation of the film on their show.

Of course, all this notoriety only prompted more people to go see the film and it was successful enough to spawn no less than four sequels! The entire Silent Night, Deadly Night series probably deserves its own “Robin’s Weird Christmas Movies” spotlight, but Part 2 is truly in a class by itself. As daunting as it may seem to select the worst sequel of all time, I’d say Silent Night, Deadly Night Part 2 is a pretty easy choice! The story revolves the younger brother of the psycho Santa from the original film going on a murderous rampage of his own. The first half consists almost entirely of recycled flashback footage, but once the real story finally starts, the film becomes a very surreal laugh riot, thanks to one of the all-time classic bad performances from Eric Freeman in the lead role. When Silent Night, Deadly Night Part 2 was released on DVD, they tried to track him down to record a commentary track, but apparently, Mr. Freeman is currently “untraceable”. It seems that the guy isn’t too proud of his newfound fame as an Internet meme, as his crazed delivery of the line “GARBAGE DAY!!” has become one of cinema’s most iconic “bad movie” moments. You can witness the immortal moment during the middle of this hilarious psycho killing spree.