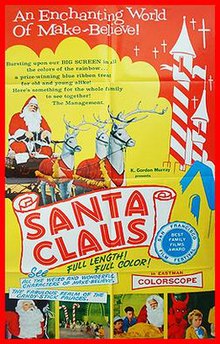 For years, I never thought it would be possible to find a Christmas movie that was more bizarre than Santa Claus Conquers the Martians. But never underestimate the fine folks at Mystery Science Theater 3000 and their willingness to delve beyond the bottom of the barrel and uncover the stuff that’s buried underneath because the bottom of the barrel doesn’t even want to touch it. For one of their most infamous episodes, the MST3K unearthed an incredibly surreal 1959 Mexican import titled Santa Claus, a film that was released when the Santa Claus legend was still a brand new phenomenon in Mexico. That may explain why their version of Santa Claus employs child labourers in a workshop on another planet that’s located above the North Pole! I had always assumed that this oddity never saw the light of day in the U.S. until it was shown on MST3K, but according to this trailer, Santa Claus won the Golden Gate Award for “Best Family Film” at the San Francisco International Film Festival! I can only assume that the judges must have been smoking the same drugs as the filmmakers!

I’m pretty glad I wasn’t a kid growing up in Mexico in the 1950s if this is what they were trying to pass off as the Santa Claus legend to us. Instead of visions of sugar plums dancing in their heads, I fear many Mexican children were having horrifying visions of Santa’s wind-up mechanical reindeer, or Satan’s demonic minion, Pitch, who runs around in a red devil costume trying to sabotage Santa’s efforts and ruin Christmas! However, on the list of my “Top 10 Favourite Mystery Science Theater 3000 Episodes”, I proudly ranked their Santa Claus episode at #2. The MST3K crew provide some of their all-best riffing on this film, and this is one of those episodes that’s doubly funny because you wind up laughing at both the MST3K commentary and the film itself. As cracked-out as Santa Claus may be, it’s undeniably hilarious, with or without the aid of MST3K. Here’s one of my favourite sections from the episode.