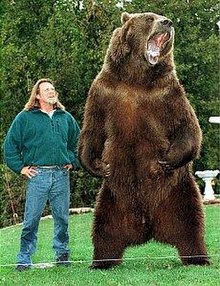 Today we have a first for the Celebrity Birthday of the Day column. Today we have a non-human actor. Bart the Bear is an Alaskan Kodiak bear who has 17 acting credits to his name and his mother even acted in films before him. Bart has appeared in titles like The Clan of the Cave Bear, The Great Outdoors, The Bear, White Fang, Legends of the Fall, and The Edge. He has acted alongside such Hollywood heavy hitters as John Candy, Steven Seagal, Gregory Peck, Dan Aykroyd, Alec Baldwin, and Anthony Hopkins. He died in 2000 of cancer at the age of 23.