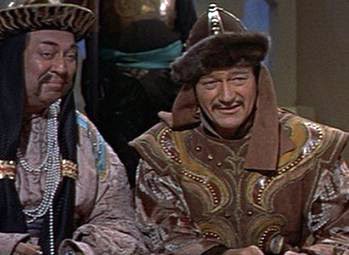 This week’s Shouts From the Back Row podcast was entitled “The Greatest Movies Never Made”, but I also took some time to talk about my pick for the “Worst Movie Never Made”: Steven Seagal’s Genghis Khan! Seagal was set to write, direct and produce this biopic and, yes, he was actually planning to play the title role! If this montrosity had gotten made, the people who who would have been most happy were those who were responsible for the 1956 film, The Conqueror, which contains what is generally regarded as the worst piece of miscasting in cinema history: John Wayne as Genghis Khan!

Produced by Howard Hughes, The Conqueror was a critical and commercial disaster and frequently makes the cut on “worst movie of all time” lists. The film contains a lot of famous non-Asian actors playing Asian roles, such as Susan Hayward, Agnes Moorehead and Lee Van Cleef, but nothing really compared to seeing The Duke with slanted eyebrows and a Fu Manchu moustache, delivering lines like “Come and take me, mongrels – if you dare” in his trademark voice. Sadly, The Conqueror is also quite infamous for much darker reasons. It was the filmed in the deserts of Utah, downwind of a nuclear testing site 137 miles away, and over 40 % of the people who worked on the film wound up getting cancer over the years! Anyway, since Steven Seagal never got his opportunity to make a worse Genghis Khan movie, The Conqueror shall retain its place in infamy. For my money, the best screen portrayal of Genghis Khan is still by legendary stuntman Al Leong in Bill & Ted’s Excellent Adventure.