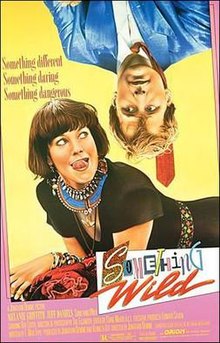 After temporarily changing the name of this column to “Robin’s Underrated Crap” in order to write an analysis of the infamously bad film, The Lonely Lady, I think I’ve found the perfect subject to transition back to “Robin’s Underrated Gems”. In The Lonely Lady, Ray Liotta made one of the most embarrassing film debuts an actor could ever have, playing the role of a psycho who rapes Pia Zadora with a garden hose. A role like that could easily kill an actor’s career right out of the gate, but Liotta is one of the lucky ones who was able to redeem himself by delivering a terrific performance in his next film. After The Lonely Lady, Liotta spent the next three years mostly working in television, but finally got his big break when director Jonathan Demme cast him as a psycho in a black comedy called Something Wild. Thankfully, this particular psycho did not have a fetish for garden hoses, so Liotta was able to steal the film with a dynamite performance, which earned him a Golden Globe nomination and propelled him on the path to stardom. Something Wild is a very underrated, one-of-a-kind film that garners a lot of momentum out of the fact that you often have no idea where it’s going. During the first forty-five minutes, you would never anticipate that a psycho character would even wind up playing a major role in the plot, but Something Wild is one of those rare films that truly feels alive. It’s much better when the characters drive the plot instead of vice versa, but in this case, the characters drive the plot nearly a hundred miles over the speed limit.

If there’s one word that could be used to describe Something Wild, it’s “spontaneous”. The main theme of the plot is spontaneity and how doing something wild and unpredictable at the drop of a hat can provide a feeling of exhilaration like no other. The lead character, Charlie Driggs (Jeff Daniels), is a New York business executive who lives a very mundane and uneventful life. As the film opens, he is at a restaurant on his lunch break and finds out that he doesn’t have enough money in his wallet to pay the cheque. He decides to sneak out without paying and this act would normally be the most daring thing he would ever attempt. However, another woman in the restaurant named Lulu (Melanie Griffith) notices him and decides that Charlie would be the perfect subject for an adventure she has planned. She approaches him and offers him a ride back to the office, but it isn’t long before they wind up in a seedy motel together. Charlie is soon phoning his office to call in sick for the rest of the afternoon while he is handcuffed to the motel bed and the half-naked Lulu is going down on him. This is just the beginning of a series of wild adventures for Charlie. He doesn’t even take the handcuffs off his wrist until several scenes later. It’s gradually revealed that Lulu wants to take Charlie back to her hometown in Pennsylvania and pass him off as her husband, but they do a lot of crazy and spontaneous things in the meantime, which include skipping out of another restaurant before paying the cheque, stealing from a liquor store cash register, and buying a used car from a salesman who looks like John Waters.

If there’s one film I could compare to Something Wild, it is probably Martin Scorsese’s After Hours, which I have also covered in “Robin’s Underrated Gems”. Both films feature a yuppie character who find themselves trapped on a wild, unpredictable adventure. Even though both characters get involved in some nightmarish situations and often freak out and panic about what’s happening to them, you know that deep down, this adventure is giving them a secret charge because it is such a welcome relief from their mundane everyday life. For its first forty-five minutes or so, Something Wild is an incredibly quirky and energetic comedy that perfectly conveys the rush of doing a series of spontaneous, unplanned things. The viewer feels the same level of intrigue as Charlie about the whole situation because you really have no idea what’s going to happen next. The film’s outlandish concept probably wouldn’t work if the two leads didn’t generate legitimate chemistry with one another, but Jeff Daniels and Melanie Griffith make the relationship work, and you can believe that these two people who don’t even know each other would decide to embark on a series of adventures together after having just met. Of course, after the motivation of these two characters and their relationship has been firmly established within the first forty-five minutes, you wonder if the story has anywhere left to go. However, when Charlie and Lulu attend a reunion at her old high school, they cross paths with Lulu’s ex-husband, Ray (Ray Liotta), who has just been released from prison for armed robbery. Ray seems overly friendly at first, but it soon becomes apparent that he is a complete lunatic.

Charlie is soon forced to choose whether he will return to the safetry of his uneventful life or make an attempt to rescue Lulu from the clutches of her possessive ex-husband. After the quirky and breezy comedic tone of the film’s first half, you wouldn’t expect Something Wild to turn into a genuinely suspenseful thriller, but the film’s climax is so intense and violent that you almost feel you’ve wandered into a slasher film! The narrative for Something Wild follows a very unusual path. After the spontaneous, unpredictable nature of its first half, Something Wild becomes a lot more conventional in the second half, but yet, in some ways, the second half works even better, thanks largely to Ray Liotta’s terrific performance. Even though the plot seems to settle down into a traditional “good guys vs. bad guys” formula, Liotta brings so much energy and intensity to the character of Ray and turns him into such an effective villain that the viewer doesn’t even mind the film’s jarring changes in tone. However, you could almost say that the jarring changes in tone almost add to Something Wild‘s unique ambiance and help convey its central theme about the unpredictable nature of life. Something Wild is not a film that likes to play by the rules, which would explain why its never found a large audience and has remained an underrated cult item for 25 years. However, the movie is slated to receive a Criterion Collection Special Edition DVD release this coming May, so it’s good to know that there are enough people out there who appreciate Something Wild and want it to receive more exposure. A quote which is often repeated throughout this film is: “It’s better to be a live dog than a dead lion”, which sums up the whole story perfectly and can almost be used as a perfect metaphor for cinema in general. You could say that Something Wild represents the live dog and that traditional Hollywood blockbusters represent the dead lion, and while the dog will never be as powerful, at least you will feel more alive in its presence.