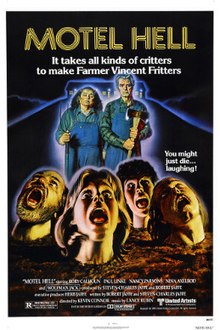 One of the reasons I’m really glad to be writing this particular “Underrated Gems” column is not just to pay tribute to an underrated cult horror film, but to answer a question that has plagued fans of The Simpsons for over 15 years. You probably remember the classic episode, “Two Dozen and One Greyhounds”, where Mr. Burns steals all of Santa’s Little Helper’s puppies and decides he’s going to make a tuxedo out of them. However, Burns decides he wants to spare one of the little puppies after this exchange:

Burns: Smithers, look! He’s standing up. I’ve never seen anything so adorable! Do you know who it reminds me of?
Smithers: Benji?
Burns: No.
Smithers: Lassie?
Burns: No, no, no, a person. You know who I mean.
Smithers: Snoop Doggy Dogg? Bob Barker? David Brenner?
Burns: No, no! The person who’s always standing and walking.
Smithers: Rory Calhoun?
Burns: That’s it!

Now, obviously, this made millions of Simpsons fans everywhere cry out “Who the fuck is Rory Calhoun?!”, but I’m proud to admit that when the episode originally aired, I actually did know who he was. However, that was only because I had recently watched Motel Hell. Rory Calhoun is a classic Hollywood actor who was best known for appearing in numerous Westerns throughout the 1940s, 50s and 60s, though by the tail-end of his career, he was mostly appearing in B-movies, including Rowdy Roddy Piper’s infamous Hell Comes to Frogtown. And, no, there really isn’t any deep connection that can be made between Rory Calhoun and the greyhounds on The Simpsons. They just decided to use his name because it was the most random, obscure reference they could think of. 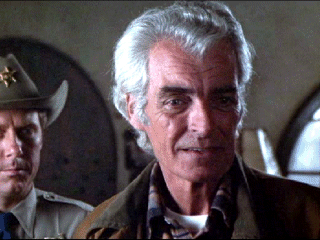 What… you don’t see a resemblance here?

Anyway, let’s get back to the movie at hand. I only went into the detailed back story about Rory Calhoun because he is one of the main reasons that Motel Hell manages to work. The film borrows many elements from such horror classics as Psycho and The Texas Chainsaw Massacre and is pretty much intended as a satire of those movies, except that the material is generally played fairly straight. The plot involves Farmer Vincent (Rory Calhoun) and his overweight sister, Ida (Nancy Parsons), who run a motel out in the middle of nowhere called “Motel Hello” (where the “o” in the sign is constantly flickering on and off) which also happens to have a farm attached it. Farmer Vincent is somewhat renowned because he makes and sells what are considered to be the most delicious smoked meats in the area. Unfortunately, not many people know the secret slogan behind them: “It takes all kinds of critters to make Farmer Vincent’s fritters”. Indeed, the reason that Farmer Vincent’s smoked meats taste so good is because he spices them with human flesh. Vincent’s plan involves using booby traps to capture unsuspecting travelers, whom he buries up to their necks in a secret garden. After cutting their vocal chords, so that they cannot scream, Vincent and Ida feed their victims and fatten them up like farm animals before they are eventually killed and used to spice the meats. Vincent’s simple rationalization for this is: “Meat’s meat and man’s gotta eat”.

Not long ago, I did a “Before They Were Stars” feature on John Ratzenberger, who has a small early role as a member of a heavy metal band called “Ivan the Terribles”, who are captured by Farmer Vincent and buried in the garden, and their ultra-bizarre death scene providing one of the movie’s highlights. One of the main reasons Vincent and Ida can get away with all this is because their dim-witted brother, Bruce (Paul Linke), is the sheriff and doesn’t find anything unusual about their tendency to bury “accident” victims in their backyard without consulting the authorities first. After using a booby trap to capture a couple on a motorcycle, Vincent actually takes a shine to the female victim, Terry (Nina Axelrod). He decides to keep her alive and lets her recover in the motel, telling her that her boyfriend was killed in the crash, even as he’s buried up to his neck in the secret garden. Bruce also winds up falling for Terry and gets jealous after he finds out that she’s inexplicably fallen in love with the much older Vincent (maybe it was the way he was standing and walking all the time). Bruce decides to investigate his brother’s activities further after consulting with an evangelist (Wolfman Jack) whose function in the movie is… well, to give Wolfman Jack a random cameo, I guess.

Of course, Motel Hell is dealing with material that has been covered before in dozens of horror movies, but it does so in a very entertaining tongue-in-cheek fashion that makes it stand out from the rest of the pack. Even though it has its gruesome and gory moments, the film is never really scary or disturbingm and even Roger Ebert, who was on an angry rampage against violent horror movies at the time this was released, actually gave it a three-star review and had to admit that it was pretty fun. Like I said earlier, Rory Calhoun’s performance as Farmer Vincent is a large reason this movie somehow manages to work. The tendency for most actors probably would have been to camp it up in the role, but Calhoun plays Vincent in a completely normal and straightforward fashion, turning him into such a seemingly lovable, good-natured old man that it’s easy to see how people could be fooled by him. A lot of humour is generated by the fact that Vincent does not seem to find anything wrong with what he’s doing, and genuinely believes that killing human beings to use them as meat tenderizer is serving the greater good (“There’s too many people in the world and not enough food. Now this takes care of both problems at the same time”). However, what really elevates Motel Hell and prevents it from being just another run-of-the-mill black horror-comedy is its finale, which involves Vincent (who’s wearing a pig’s head as a mask!) and Bruce getting into a chainsaw duel as Terri is lying on a conveyor belt, slowly moving towards a meat cutting blade. This whole sequence parodies the “damsel-in-distress” cliche in hilarious fashion, and concludes with Vincent delivering a priceless deathbed confession. While I’d recommend watching the whole film first, I’ve posted this amazing finale for viewing below. Anyway, Motel Hell is not definitely not for all tastes and is recommended mostly for genre fans and those with a sick sense of humour, but it is available on DVD from MGM in a “Midnite Movies Double Feature” alongside another one of “Robin’s Underrated Gems”, Deranged. If you are a horror fan and you’ve never seen either film, this is one hell of a kick-ass deal, so what are you waiting for?!