Posted on April 22, 2011 by curtisrunstedler 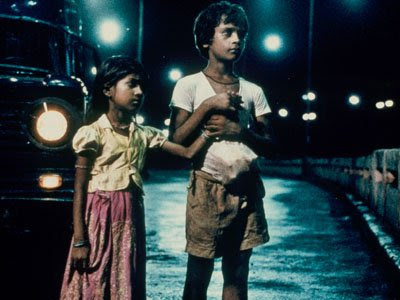 Salaam Bombay!, which is one of my top five favourite films of all time, is a 1988 Hindi film told with great detail and introspect. It tells of a young Hindi boy named Krishna who lives in the rural areas of India who destroys his brother’s motorbike and is forced to go into the city of Bombay to pay for it. Along the way, he meets all manner of characters from the city’s underworld, from drug addicts to pimps to prostitutes. Their intentions and desires influence the course of the boy’s journey, creating a rich narrative and beautiful cinematography. The film’s score is well done and evocative.  I haven’t seen any of Mira Nair’s other films, but if this film is any indication of other bodies of work, then I’d love to see what else she’s accomplished. Salaam Bombay! is a film that registers all emotions and, without giving away too much, you emerge from the film with a true sense of tragedy. This spectral component is integral to appreciating the sublime and aesthetic beauty that this film facilitates.

One of the preconceptions of this film, as well as many other Indian films, is that it follows the structure of a traditional Bollywood film. While Salaam Bombay! is filmed on location, the film is more interested in realism, drawing from the essence of impoverished urban life. Krishna’s everyday life is an ongoing adventure, for better or for worse. In one scene, Krishna escapes from an orphanage that he has been placed in, only to return to the seedy underworld that has surrounded him since his arrival in Bombay. The film’s conclusion suggests that he is doomed to repeat this eternal cycle, trapped in an increasingly bleak series of events.

The ultimate triumph of Salaam Bombay! as a work of art is its ambition and unabashed scope. Naira examines horrific events that are a part of everyday life for these people. She explores topics with an audacity that merits respect and admiration. She does not shun away from the horrors that these people constantly face, but rather she exposes their plight to the light. Salaam Bombay! is a testament to these seemingly lost voices who still haunt the alleys and streets of Bombay and is essential viewing for anyone who appreciates film.