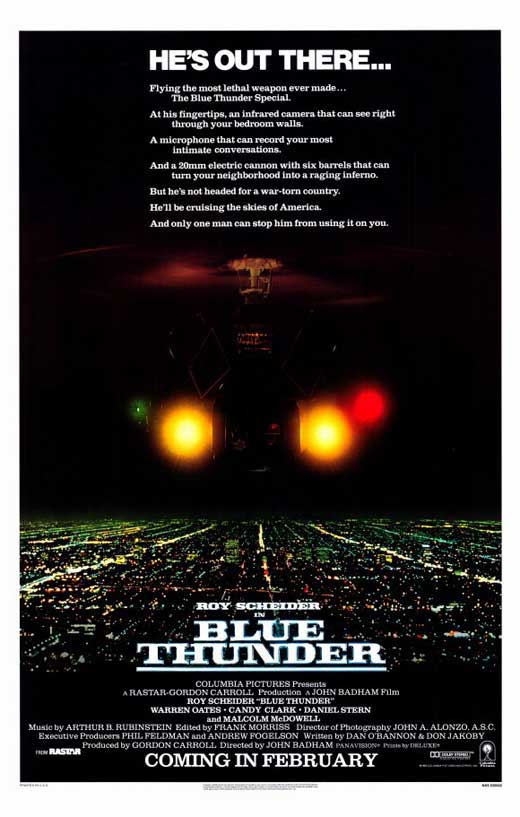 On our last Shouts From the Back Row podcast, we talked about our personal favourite gadgets and gizmos from films and television shows and, of course, I had to select at least one device which may seem ridiculously cheesy today, but just blew my mind when I was much younger. There was a phase during the mid-1980s where it seemed that the go-to guy for directing movies about high-tech gadgetry was John Badham. From the supercomputer in Wargames to the “Johnny 5” robot in Short Circuit, Badham’s films specialized in presenting advanced technology from that time period which has now become hilariously outdated, but still provides you with a warm feeling of nostalgia for the gadgets of yesteryear. In between those two popular films, Badham directed an action-thriller named Blue Thunder, which was a decent-sized hit at the time, but does not seem to be as well-known as Wargames or Short Circuit. The storyline revolves around a high-tech experimental police helicopter called “Blue Thunder” and when I originally saw this film, I thought that chopper was one of the coolest things I had ever seen in my life. For a brief period, I even thought I might want to be a helicopter pilot when I grew up, especially if it gave me the opportunity to fly something as cool as Blue Thunder. The way this film presented it, a chopper like Blue Thunder pretty much gave you the power to do ANYTHING! Of course, 28 years later, a lot of the situations presented in Blue Thunder seem ridiculous and absurd, but that doesn’t mean the film isn’t a great deal of fun.

The screenplay for Blue Thunder was co-written by Don Jakoby and the late, great Dan O’Bannon, who also gave the world Alien and Return of the Living Dead. The original draft of this screenplay presented a pretty neat storyline about a mentally unbalanced police helicopter pilot deciding to steal a high-tech chopper and going on a violent rampage where he tried to destroy Los Angeles. Of course, the studio wasn’t too keen on the idea of a psycho character like that being main protagonist of a story, but they did like the concept of a helicopter battle over L.A., so the script was heavily rewritten and given the green light. In the finished version, the protagonist, Frank Murphy (Roy Scheider), is still a bit mentally unbalanced, but he’s a lot more likable. Murphy is a former Vietnam veteran who works as a helicopter pilot for the L.A.P.D.’s Astro Division and performs surveillance patrols for them, but he does suffer from Post Traumatic Stress Disorder and is capable of doing reckless, unpredictable things. Murphy performs his air patrol with a much younger partner named Lymangood (Daniel Stern) and one night, they happen to witness the murder of a prominent city councilwoman. The police just write it off as a random attack by a pair of would-be rapists, but Murphy thinks there’s more to it and starts conducting his own investigation. It isn’t long before he’s recruited by some government agents to participate in a top secret program where he can serve as a test pilot for their stealth Blue Thunder helicopter. This chopper is intended to be one of the future’s greatest weapons in the war on crime and terrorism, as it contains such neat features as a “whisper mode” that it allows to fly without making a sound, infrared scanners, and microphones so powerful that the pilots can hear and record conversations from hundreds of yards away. Blue Thunder also contains a six-barrel Gatling gun that allows it to fire off 4000 rounds per minute.

As awesome as this Blue Thunder helicopter is, Murphy immediately senses that it is going to be used for nefarious purposes, especially after he finds out that it is being piloted by the sinister Colonel F.E. Cochrane (Malcolm McDowell), a former nemesis of his from Vietnam. Murphy soon uncovers a secret government project called T.H.O.R. (Tactical Helicopter Offensive Response), which is being run by a covert group who are planning to use Blue Thunder to perpetuate illegal acts and violate the civil liberties and privacy of citizens. While performing a routine patrol in Blue Thunder, Murphy winds up recording a secret conversation involving Cochrane and his conspirators where they admit they had the city councilwoman killed because she provided resistance to their project. In the film’s last act, Murphy becomes a wanted fugitive and steals Blue Thunder to help protect his girlfriend Kate (Candy Clark) as she tries to deliver a tape of the conversation to the media. Cochrane and the military make several attempts to shoot Blue Thunder down, and the climax involves Murphy and Cochrane staging an all-out helicopter battle over Los Angeles where they cause untold millions in property damage. It goes without saying that the storyline for Blue Thunder is completely implausible and absurd and even the movie’s biggest fans will concede to that. However, anyone who’s willing to suspend their disbelief should find this film tremendously entertaining. When it comes to presenting helicopter chases and dogfights and large sections of Los Angeles getting destroyed, Blue Thunder more than delivers the goods. I’ve stated this exact same point when discussing numerous action films from the past, but it bears repeating again: if this movie were made today, its big setpieces would probably be done entirely with CGI and they would lose a lot of their charm. In 1983, all the special effects and action sequences in Blue Thunder had to be done practically and all those crazy helicopter stunts had to be performed by actual pilots. Even though that process is more difficult and time-consuming, the end result looks so much more convincing than it would if it was done on a computer, and it just makes these scenes a lot of more involving and exciting to watch. To get a nice glimpse of some of these stunts and how they were filmed, here’s an old retro featurette from 1983 (set to the tune of “Sirius” from The Alan Parsons Project!).

While Blue Thunder is never believable or plausible for a second, the filmmakers do often take a tongue-in-cheek approach to the whole thing and deliver some pretty funny scenes, particularly when Murphy dodges a heat-seeking missile from an F-16 by hiding behind a barbeque shack, causing an entire city block to be showered with an explosion of BBQ chicken! The screenplay from O’Bannon and Jakoby contains its fair share of witty dialogue, and even though characterization is obviously not the top priority of this film, Murphy and the rest of the characters presented here are quite quirky and fun to watch. Blue Thunder would also be one of the very last acting roles in the career of the late, great Warren Oates (to whom the film is dedicated), who plays Murphy’s grumpy police captain. As you may have seen from the clips of him in the preceding featurette, Oates greatly elevates a relatively thankless and clichéd role with his wonderful delivery of such dialogue as: “You’re supposed to be stupid, son. Don’t abuse the privilege!”. Anyway, Blue Thunder was popular enough that it actually got its own spin-off TV series in 1984. However, it only lasted 11 episodes, and the main reason it was cancelled was due to the popularity of another TV series about a high-tech helicopter that hit the air at the same time: Airwolf. Even though Airwolf was pretty much a copycat of Blue Thunder, it’s somewhat ironic that it has wound up being more remembered than the movie it originally ripped off! However, Blue Thunder is definitely essential viewing for action aficionados who have never seen it, as it provides ample entertainment for fans of the genre. It’s a ridiculous movie, but it’s smart enough to know how ridiculous it is, and, at the very least, it provides a fun nostalgic trip for those of us who look back at eighties technology with great fondness. And I doubt anyone who watches it will come away not wanting their own Blue Thunder helicopter. As a special bonus, I shall close things off by presenting the retro opening for the Blue Thunder TV series, which starred a pre-Saturday Night Live Dana Carvey, along with Dick Butkus and Bubba Smith!