Before They Were Stars (2-for-1 Special): Scarlett Johansson and Eva Mendes in “My Brother the Pig” 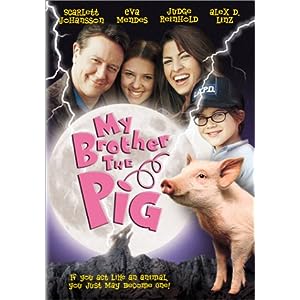 In 1999, 15-year old Scarlett Johannson starred in a Nickelodeon kid’s movie called My Brother the Pig, playing a girl whose brother is victimized by a Mexican curse that literally turns him into a pig. In one of her earliest roles, Eva Mendes plays their nanny, who takes them on a road trip to Mexico in hopes of reversing the curse and turning the pig brother back to normal. Judge Reinhold also plays the siblings’ father and is no doubt insanely pissed that his co-stars will go on to much bigger things while he’s stuck acting in pieces of shit like this for the rest of his career.