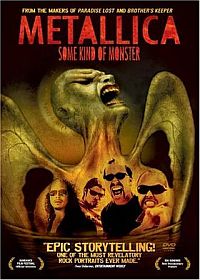 I recently did a “Robin’s Underrated Gems” column on Paradise Lost: The Child Murders at Robin Hood Hills, the harrowing 1996 documentary about the infamous West Memphis Three case, where three teenagers from West Memphis, Arkansas were convicted of the brutal murders of three local young boys. There didn’t seem to be any evidence linking these teens to the murders, but in the minds of many people, they had to have committed the crime because they supposedly practiced Satanism, dressed in black and *gasp* listened to Metallica! Before Paradise Lost, Metallica had never granted permission for their music to be used in a film, but the implication that the band helped turn the West Memphis Three into child-murdering Satanists outraged them, so they licensed their songs to the documentary for free. So began a relationship between Metallica and the filmmakers, Joe Berlinger and Bruce Sinofsky, that would lead to another very compelling documentary eight years later. Following Paradise Lost and its sequel, Berlinger tried his hand at Hollywood when he was hired to direct Book of Shadows: Blair Witch 2, the sequel to the insanely successful The Blair Witch Project. The film proved to be a critical and commercial disaster which killed the Blair Witch franchise for good, but in Berlinger’s defense, he’s always claimed that the studio provided so much interference that the finished product bears little resemblance to his original vision. After that horrific experience, Berlinger and Sinofsky decided that their next project would be a fairly lightweight and stress-free one. The filmmakers decided to rekindle their relationship with Metallica and were hired to do what was essentially intended to be a fluffy promotional video about the band which would likely lead to a VH1 reality mini-series in the vein of The Osbournes. Little did the filmmakers know that they almost wound up chronicling the self-destruction of one of the most famous bands of all time.

At the beginning of Metallica: Some Kind of Monster, the band is making plans to record its first album in nearly five years. The album would eventually be known as “St. Anger”, but it would a whole two years before it was finally released and the band would go through many trials and tribulations during that time. The recording of the album is initially delayed when bassist Jason Newsted leaves the group to pursue other ventures. James Hetfield, Lars Ulrich and Kirk Hammett are left to work on the album on their own while their producer, Bob Rock, fills in as the bass player for the recording sessions. To help themselves deal with their internal issues, Metallica has decided to hire a therapist named Phil Towle, who bills himself as a “performance enhancement coach” and has a history of providing his high-priced services to musicians and pro sports teams. As stated earlier, this documentary wasn’t intended to be anything more than a chronicle of how a famous band records their music and lives their day-to-day lives, but things do not go as planned. The band seems to hit a creative funk and James and Lars are constantly at each other’s throats. Six months into the recording session and with tensions running high, James suddenly leaves to check himself into a rehab center for alcoholism and other undisclosed addictions.

This delays the production of the album indefinitely and it is nearly an entire year later before James can return to the studio and start recording again. Lars has to deal with his own issues as well, most notably the infamous Napster controversy. When he sees Jason Newsted having success his with new band, Echobrain, Lars seems to develop a mid-life crisis and starts to wonder if Metallica has become completely irrelevant. Indeed, when James finally returns, the internal squabbling and creative funk continues and one has to wonder if they will be able to finish their album. Metallica: Some Kind of Monster goes into some surprising uncharted territory as it starts showcasing how a hugely successful, multimillionaire heavy metal band is forced to use group therapy to help prevent themselves from possibly breaking up. I have to concede that your tolerance of this documentary may depend a lot on your tolerance for watching millionaire celebrities whine about their problems. Kirk comes across as a fairly laid-back, down-to-earth guy who is at peace with himself and his role in the therapy sessions is mostly to sit back and watch his other two bandmates argue. Indeed, James and Lars do come across as very egotistical, self-absorbed and moody, but it’s fascinating to see them not as larger-than-life rock stars, but as normal, everyday human beings. Besides, their squabbling is often very entertaining to watch at times. The end of this scene, where Lars walks up to James and yells “FUCK!” right into his face, never fails to crack me up.

Love them or hate them, you do have to applaud Metallica for their willingness to allow themselves to be filmed this way. After James returned from rehab, the band and the filmmakers had a serious discussion about whether the documentary should continue, but Metallica made the rather courageous decision to let the crew stay with them and film all their therapy and recording sessions, allowing them to use footage that many celebrities would never want anyone to see. Those who have been the subject of a documentary or a reality series will often claim that after spending your day-to-day life being followed around by a film crew, you eventually become oblivious to them and wind up saying or doing things that you would normally never say or do in front of a camera. Intentionally or not, some of the therapy sessions shown in Some Kind of Monster are comedic gold. The “performance enhancement coach”, Phil Towle, is almost too ridiculous to be believed, as at a salary of $40,000 PER MONTH, Phil’s “therapy” mostly consists of him sitting in the background in his Cosby sweaters and telling the band things that any average Joe could tell them for free! The comic highpoint of the film has to be the therapy session between Lars and Dave Mustaine, who was kicked out of the band in 1983. Even though Mustaine found great success with own band, Megadeth, he has never gotten over being fired from Metallica and acts like such a whiny bitch about having to settle for “second best”.

While different people are probably going to react to Some Kind of Monster in different ways, I can safely say that it does a good job of appealing to Metallica fans and non-fans alike. Fans of the band will find this documentary absolutely fascinating as it provides so much in-depth detail about their professional and personal lives. They will particularly enjoy the opportunity to see the inner workings of how Metallica records their music, and will love the extended sequence late in the film where they audition new bass players to replace Jason Newsted. Non-fans are probably going to find Some Kind of Monster to be compelling viewing, even if they don’t particularly like the people in the band. This documentary is definitely one of the best examinations into the lifestyle of a celebrity, and it’s neat to see the film intercut between Metallica’s private lives and their lives in the spotlight. You get to see them showcase their self-confidence while performing for fans and giving interviews with the media, and greatly contrast it with the genuine vulnerability they display in their therapy sessions. Whether or not you sympathize with Metallica’s vulnerabilities or just think they are a bunch of spoiled, whiny brats is up to interpretation, but even if you believe the latter, you’ll probably still enjoy the film as unintentional comedy. Seven years after Metallica: Some Kind of Monster was released, the band is still going strong, but this film shows how close it came to coming to an end. One has to wonder how The Beatles would have done with a performance enhancement coach…

This entry was posted in Movies, Music, Robin's Underrated Gems. Bookmark the permalink.