Robin’s Underrated Gems: The Little Girl Who Lives Down the Lane (1976) 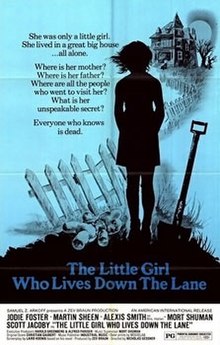 When you make a list of child actors who have successfully made the transition to adulthood, Jodie Foster definitely ranks right at the very top. After starting her acting career at the age of three, Foster already had a plethora of credits to her name when she garnered her first Academy Award nomination at the age of 14 for playing a child prostitute in Taxi Driver. Of course, thirty-five years and two Academy Award victories later, Jodie Foster continues to flourish, but her success in Taxi Driver actually overshadowed a major turning point in her career from that same year. In 1976, a solid little Canadian horror drama called The Little Girl Who Lives Down the Lane was released which gave the 13-year old Foster one of her first leading roles and pretty much called upon her to carry an entire film by herself. Directed by Nicolas Gessner, The Little Girl Who Lives Down the Lane was based on a novel by Laird Koenig and tells a very minimalist story with a limited number of characters, but does its job very effectively and was one of the very first indications that Jodie Foster had the acting chops to successfully continue her career for as long as she wanted to. The film’s deliberate pace and low-key approach may not appeal to all viewers, but this remains a very potent and underrated thriller.

The Little Girl Who Lives Down the Lane takes place in a small town in New England and tells the story of Rynn Davis (Jodie Foster), a mysterious and very independent 13-year old girl who has recently moved into a house in the area. She seems to live alone and while she claims to share the house with her poet father, no one in town ever seems to see him and he is conveniently not around whenever anybody stops by their home. Naturally, this starts to make some people suspicious and Rynn shows visible signs of nervousness whenever anyone in the house starts moving towards the cellar. Rynn is constantly pestered by the local landlady, Mrs. Hallett (Alexis Smith), but her interest in Rynn is due largely to a dark secret of her own. Mrs. Hallett’s son, Frank (Martin Sheen), seems to have a VERY unhealthy interest in young girls and tries to hit upon Rynn at every opportunity. Rynn begins a friendship and eventual romance with Mario (Scott Jacoby), a local teenage boy who works as a magician, and draws the curiosity of the local policeman, Officer Miglioriti (Mort Shuman), who also grows suspicious of Rynn’s perturbed reactions whenever he moves towards the cellar. These are pretty much the only five characters in the story, but the film manages to get a lot of mileage out of them.

Obviously, it would seem pretty easy to figure out what Rynn’s dark secret is, but The Little Girl Who Lives Down the Lane is not that simple. It often goes in places you do not expect and there are quite a few moments in the film that you may wind up interpreting differently on a second viewing. Rynn is a very complex, fascinating character that would have been an extremely difficult challenge for most young actresses to play, but Jodie Foster is more than up to it and shows a remarkable maturity and intelligence in the role. Most child actors simply just recite their lines and play their roles, but very few of them can completely inhabit their characters like Foster does here. While this is Foster’s film all the way, she is matched quite well by Martin Sheen in a most atypical role for him. Out of all the creepy pedophiles portrayed in cinema, Frank Hallett is definitely one of the most memorable and hateful, and Sheen makes him into one of the more underrated horror movie villains of all time. The Little Girl Who Lives Down the Lane starts to enter really dark territory when Frank discovers one of Rynn’s secrets and decides to blackmail her, offering to stay silent in exchange for sexual favours. In a nasty scene which is sure to traumatize all animal lovers in the audience, Frank burns Rynn’s pet hamster with a cigarette and throws it into the fireplace!

Oh, and did I mention that The Little Who Lives Down the Lane is only rated “PG”?! And that it features underage nudity?! In a scene that was edited out of the theatrical release, but has been restored on DVD, Rynn undresses and rear and very brief side nudity are actually shown. Before you start asking why the makers of this film didn’t get arrested, Jodie Foster’s 21-year old sister, Connie, was actually the body double for the nude scene, but believe it or not, Jodie WAS asked to do it herself and refused! In fact, Jodie Foster has not been shy at expressing her unhappiness about this scene and does not seem to be particularly fond of The Little Who Lives Down the Lane at all. That is kind of a shame and may be the reason this is one of Foster’s most underrated performances. It should be clarified that in spite of its very dark and taboo subject matter involving pedophilia, The Little Girl Who Lives Down the Lane is remarkably subdued and (aside from the brief nude scene) shows very little, hence why it got away with being released with a “PG” rating. The film almost resembles a stage play, and indeed, Laird Koernig would later adapt his novel for the stage. Like I said before, this movie may prove too slow for some viewers, but it does do a very good job at generating tension and the strong performances carry it along nicely. Jodie Foster may not be proud of The Little Girl Who Lives Down the Lane, but don’t let that sway you from seeing it. When you view the very last shot of her face in this film and ponder how it can interpreted in so many ways, you know that you are watching one of the more impressive child performances of all time and some of the actress’ most underappreciated work.