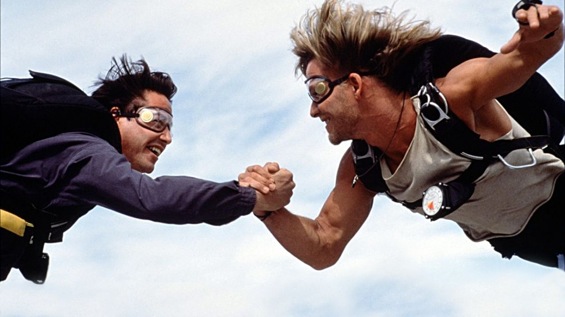 It seems that some of our Shouts From the Back Row podcasts have been getting eerily prescient lately. Just a month after I discussed the West Memphis Three on one of our podcasts, they were suddenly released from prison, and now, less than two weeks after we discussed Point Break on our podcast about heist films, they’ve announced plans to do a remake! Not surprisingly, Point Break fans are not too happy about this news. I’m sure many of them are currently firing their guns into the air while screaming “AAARGH!!”. One fan wrote on Twitter: “Do they not realise Point Break WAS Patrick & Keanu?”. I can’t say I disagree because I don’t know how a remake could possibly recapture this type of campiness:

Indeed, part of the appeal of Point Break is that it took an incredibly absurd premise about an FBI agent going undercover amongst a gang of bank-robbing surfers and played the material completely straight. A lot of the film’s fun is seeing how seriously Patrick Swayze and Keanu Reeves take their ridiculous roles and because of their sincere conviction, the movie works! Whether or not the remake is made as a serious thriller or a piece of camp, I just don’t see it holding the same appeal that has made Point Break a popular cult item for the past twenty years. At the very least, they will need to hire a great action director. The reason that people are able to enjoy the original Point Break as more than just a camp classic is because of Kathryn Bigelow, who delivered some of the kick-ass action sequences you’ve ever seen. This combination car/foot chase is an all-time classic, which climaxes, of course, with Keanu firing his gun into the air and screaming “AAARGH!!!”.