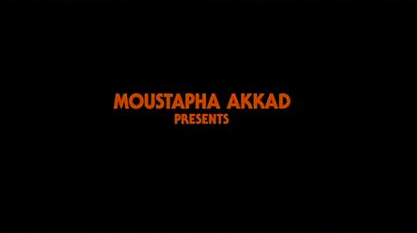 Gill has already written extensively about the world’s frustration with George Lucas making even more changes to the original Star Wars trilogy for their Blu-ray release, and it looks like Universal has decided to follow the same path for their Blu-ray release of Halloween II (the 1981 original, not the Rob Zombie monstrosity). For completely inexplicable reasons, Universal has decided to remove the title card that reads “Moustapha Akkad Presents” from the opening credits and replaced it with a new title card that reads “Universal MCA Company Presents”. And as you can probably tell by the following image, they did a really half-assed job of it!

Now, since Moustapha Akkad was the executive producer of every one of the non-Rob Zombie Halloween films, removing his name from the film is disrespectful enough, but the real outrage is that Mr. Akkad is no longer here to defend himself. Not only has he been deceased since 2005, but he died in a very horrible and tragic fashion when a suicide bomber killed both him and his daughter in a hotel lobby in Jordan! It could be debated that George Lucas has the right to make changes to the Star Wars films because they are his baby, but the Halloween franchise was Moustapha Akkad’s baby, so I really can’t imagine what Universal was thinking when they decided to remove his name! Anyway, Halloween fans have already cried for a boycott of the new Halloween II Blu-ray and apparently, Universal might actually be taking steps to correct this problem. In the meantime, feel free to watch the original version of the Halloween II opening titles with Moustapha Akkad’s name still intact.