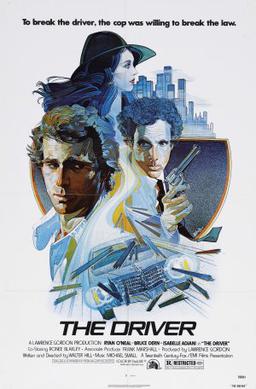 Ever have one of those experiences where you’re sitting through a movie and think it resembles another movie you’ve seen, but you just can’t quite figure out what it is? I recently went to see Nicolas Winding Refn’s acclaimed neo-noir action film, Drive, and thought something about it seemed awfully familiar. Of course, its premise about a guy hiring out his services as a getaway driver for professional thieves initially reminded me of the Jason Statham action film, The Transporter, but it wasn’t until a few days later when Walter Hill’s underrated 1978 film, The Driver, suddenly popped into my mind. In Drive, Ryan Gosling’s protagonist is an emotionless man who doesn’t have a name or a backstory and is simply known as “driver”. In The Driver, these traits apply to a protagonist played by another “Ryan”, Ryan O’Neal, and they are both essentially the exact same character. I don’t want to give the impression, however, that Drive is a rip-off or an uncredited remake of The Driver, because aside from the similarities between their premise and lead character, they are very different movies. Drive is overly stylized and has been referred to as an “arthouse action film”, and while some people have found elements of The Driver to be artsy as well, I simply think of it as a no-frills, balls-to-the-wall action picture that makes no apologies for being what it is.

Like I stated earlier, The Driver tells a very simple story about its mysterious title character (Ryan O’Neal), who makes his living by stealing cars and making difficult getaways from big-time robberies. One of the big differences between this film and Drive is that not only is the main character here nameless, but NOBODY has a name! None of the characters in this movie refer to each other by name and they are all listed in the end credits by their occupation or physical trait. We learn that the Driver has been pursued for a long time by The Detective (Bruce Dern), who seems absolutely obsessed with bringing the Driver in and is willing to step outside the boundaries of the law in order to do so. The Driver’s jobs are always set up by The Connection (Ronee Blakley) and for his latest endeavour, he receives considerable assistance from The Player (Isabelle Adjani). The Player plants herself as a witness at the Driver’s getaway scene, so that when the Detective later brings in the Driver and asks the Player to ID him in a line-up, she can positively claim it wasn’t him. The Detective becomes enraged and devises a scheme after arresting a bank robber known only as Glasses (Joseph Walsh). The Detective’s plan involves forcing Glasses and his gang to hire the Driver to drive their getaway car for another bank job, so that the Detective can finally catch him in the act.

The Driver is about as minimalist as you can get and there really isn’t that much more to it than what I described in the plot summary. We learn virtually nothing about any of these characters except that the Detective hates the Driver and wants to catch him. The lack of names for the characters would seem to indicate that they are not really considered characters at all, but symbols. In a way, this is almost an ideal role for the ultra-bland Ryan O’Neal, whose rise to stardom in the 1970s still flabbergasts me to this day. However, if you have to use him, I guess it doesn’t hurt to have him play a character with little personality and limited dialogue, but I can’t help but wonder how much more weight an actor like Charles Bronson or Steve McQueen (the director’s original choice) would have brought to the role. In contrast, Bruce Dern brings a lot of energy and intensity to the role of the obsessive Detective, easily making him the most interesting character in the film. Of course, characterization has never been Walter Hill’s strongest suit during his directorial career. His prime goal has mainly been to deliver entertaining action films, pure and simple. After working as a screenwriter throughout the early 1970s, Hill made his directorial debut in 1975 with the Charles Bronson boxing picture, Hard Times, and had his first major hit four years later when he made The Warriors. In between those two films, he made The Driver, which is largely forgotten about today, but still has a bit of a cult following. And there is one major reason for that: a great selection of kick-ass car chases!

I’ve said this so many times that I must sound like a broken record, but the car chases of yesteryear are generally much more exciting that most of the car chases of today. Because of the invention of CGI, there are no limits to what can be done in a car chase sequence these days, but back before that technology existed, you always knew that what you were watching in a car chase was real. No matter how it was done, somebody actually had do that dangerous stunt driving and perform those crazy stunts and it added so much more excitement to the proceedings when you knew it wasn’t all being done on a computer. The chases and stunts that Quentin Tarantino (a noted fan of The Driver) provided in Death Proof drew tons of praise because we knew they were all real, and harkened back to the heyday of the 1970s when films like The Driver were delivering kick-ass car chases on a consistent basis. Interestingly enough, Walter Hill’s original cut of The Driver was 131 minutes and was only screened once before he decided to trim it down to 90 minutes. The original cut has never been seen since and reportedly contained some extra chase scenes and more characterization. It would be interesting to see how much more depth this longer version of The Driver really had, but Hill apparently thought that simpler was better, which is why he prefers this more brisk and fast-paced version. Because of the nameless characters and the minimalism of the story, some people have referred to The Driver as an existentialist action picture. While there may be some truth to that, I prefer to view The Driver as nothing more than an exciting, energetic action picture that seeks only to entertain and provide memorable car chases. It’s probably best to ignore all the talk about existentialism and just sit back and enjoy the ride.